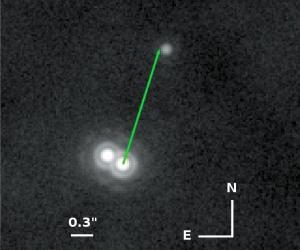 The binary system 2M0103, with its central pair of stars and mystery third object in orbit around them. This infrared image was produced by the Very Large Telescope at ESO-Paranal in Chile (Image: ESO 2013)

Snapshot of a two-faced Tatooine world

Exoplanet hunters may have bagged the first direct picture of a planet with two suns. But the object, catchily dubbed 2MASS0103(AB)b, has a double life. It is so massive that it may also be a failed star with a relatively tight orbit around the central binary stars. Astronomers have not yet unravelled the truth. Deciding its identity could teach us more about how stars and planets form.

Philippe Delorme of the Joseph Fourier University in Grenoble, France, and colleagues took the picture in November last year using a telescope in Chile. Searches in the telescope's archives turned up data on the object's position in 2002 (, marked in the picture by a green arrow), allowing them to trace its orbital motion around the binary stars.

Also known as Tatooines, after a fictional world in Star Wars, planets that orbit binary stars have only been found before through indirect methods. The new object orbits at a distance of about 12.5 billion kilometres, close enough to its stars to have been born from a disc of dust surrounding them, like a planet. But it is 12 to 14 times the mass of Jupiter, placing it near the dividing line between planets and failed stars called brown dwarfs.

"It's either one of the most massive planets you can form or the lowest-mass star you can imagine," says Delorme.

If it is a planet, it must have formed via gravitational instability, in which clumps in the dust disc quickly collapse into planets. It is too large in relation to the stars to have been made by core accretion, a more widely accepted model in which planets grow via slow accumulation.

Delorme notes that the current mass-based dividing line between planets and failed stars "is more of a working definition, as it is easier to measure the mass of an object than its past formation history". His team is now analysing the object's light spectrum to learn more about its atmosphere.

Figuring out the chemical makeup of 2MASS0103(AB)b could confirm the object as a Jupiter-like planet, lending weight to the instability model. Or it could reveal that the object is in fact a rare type of brown dwarf that was born together with the binary pair. All three would have formed when turbulence inside an embryonic star caused it to break into pieces. That in turn might be crucial to properly identifying such bodies in the future.

"It's a really cool image," says Ben Burningham of the University of Hertfordshire, UK, even though it further muddies the waters separating planets and brown dwarfs.

As to whether he thinks 2MASS0103(AB)b is really a Tatooine planet, Burningham says, "I'm giving it a firm maybe."