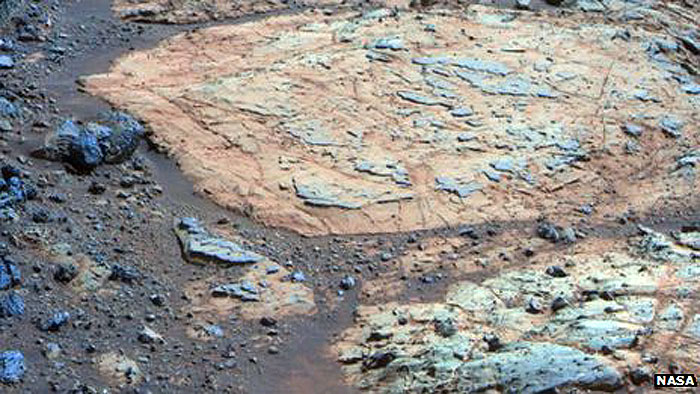 The Opportunity rover is studying the most ancient rocks it has yet seen on Mars - and they resemble those found by its one-tonne cousin Curiosity.
The findings could help build a picture of early Mars - and whether it would have been amenable to primitive life.
The ancient rocks found by Opportunity occur as a light-toned outcrop known as Whitewater Lake.
The outcrop is thought to contain clays, similar to a rock recently drilled by Curiosity.
But there are other uncanny similarities between Whitewater Lake - which lies on the rim of a 22km-wide bowl called Endeavour Crater - and rocks from Gale Crater to the east, where Curiosity landed.
Opportunity's chief scientist Prof Steve Squyres outlined details of the latest findings at the 44th Lunar and Planetary Science Conference in The Woodlands, Texas.
He said one of the factors that had drawn the science team towards Endeavour was the evidence gathered by Nasa's Mars Reconnaissance Orbiter (MRO) for the presence of phyllosilicates (clay-bearing rocks) along the crater's rim.
The Whitewater Lake outcrop coincides closely with the signature of smectite clays from MRO, Prof Squyres, from Cornell University in Ithaca, US, explained.
It is very fine-grained, soft, similar in composition to the Martian soil and has fine ridges when seen in cross-section.
Snaking features
Whitewater Lake is "shot through" with light-toned, snaking features called veins, which appear to be filled with calcium sulphate. These are the result of water flowing through fractures in the rocks after the impact that carved out Endeavour Crater.
Continue reading the main story
“
Start Quote
Mars is telling us something. I'm not sure what it is because it's speaking Martian. But it's telling us something”
Prof Steve Squyres
Cornell University
There are also numerous rounded structures called "spherules" embedded in the rock. Opportunity has seen similar small structures out on Mars' Meridiani plains, which the rover team nicknamed "blueberries".
"The spherules are for the most part distributed throughout the Whitewater Lake rocks, but there are places locally where we find incredible concentrations," Prof Squyres told the conference.
But the comparison to the blueberries, seen earlier in the mission, may only be superficial.
"There are a few small visual differences and then a big compositional difference. These do not have the very high iron content… to be the blueberries we see on the plains.
"They are hard on the outside and chewy on the inside… and the composition is different from the [rock] matrix."
Such spherules can form through the action of water, but a volcanic or impact origin is also possible.
Most habitable environment
Prof Squyres added: "These Whitewater Lake materials are the oldest rocks yet explored by the Opportunity rover. They record an epoch before the Endeavour impact when there was aqueous activity at a near-neutral pH.
"They therefore represent the most habitable palaeo-environment found [by Opportunity]."
Previous sites explored by the rover are thought to have been shaped by the activity of acidic water, which would pose a more challenging proposition for any simple microbes that might have evolved on the early Mars.
They cannot put an exact age on the outcrop, but it could date to more than three billion years ago, when Mars was a wetter place.
Prof Squyres showed a comparison of the Whitewater Lake outcrop and rocks found at the location Curiosity is exploring in Gale Crater. They showed many similarities, he said, including the spherules, calcium sulphate veins and fine-grained structure.
"Mars is telling us something. I'm not sure what it is because it's speaking Martian. But it's telling us something," he said.
Opportunity landed on the Red Planet in January 2004, about three weeks after its "twin", the Spirit rover. Spirit's mission ended after getting caught in soft soil in 2009 and succumbing to the Martian winter.
.
Quelle: NASA
« Zum vorherigen Eintrag Zum nächsten Eintrag »
3894 Views
Created with page4