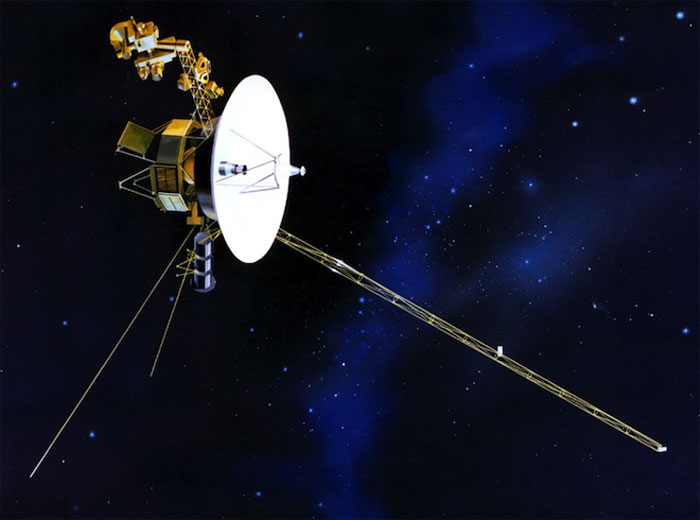 Wait for It: Voyager 1 Has Not Yet Left the Solar System
.
Despite reports to the contrary, NASA’s tiny interplanetary probe Voyager 1 has not really left the solar system yet.
Launched more than 35 years ago, Voyager 1 is the most distant man-made object from Earth. After making an incredible tour of the outer planets of our solar system, the probe was directed on a course away from the sun and is now more than 18 billion kilometers from our world.
A study released Mar. 20 suggests that the spacecraft has entered a new region, where the charged-particle wind emitted by the sun no longer dominates, and will soon venture into interstellar space. Some have taken this to mean that Voyager has exited the solar system. Unfortunately, many researchers, including the probe’s own science team, disagree.
“It is the consensus of the Voyager science team that Voyager 1 has not yet left the solar system or reached interstellar space,” wrote astronomer Ed Stone of Caltech, the mission’s project scientist, in a NASA statement.
It is actually a very difficult problem identifying exactly where the solar system ends and interstellar space begins. The sun’s particle wind is thought to recede in strength as one ventures farther and farther away, eventually declining to nothing. At this point, there should be a sharp drop in the temperature of charged particles and an increase in galactic cosmic rays, which dominate interstellar space. But scientists have little information about what exactly happens at this distance from the sun. Voyager 1 is a pioneer in this region.
Voyager 1′s instruments have detected a drop in radiation levels and a spike in cosmic rays. Whether or not this means the probe is outside the solar system or simply in a new, previously undiscovered area remains to be seen.
People should be skeptical of claims of Voyager 1 exiting the solar system as NASA has sung this tune several times before. In October, the exact same headlines announced the spacecraft’s farewell and were soon thereafter contradicted with further data. The definition of where the solar system ends ultimately comes down to semantics. The sun’s radiation may no longer be affecting the probe but its gravitational influence extends for many more billions of miles. The Oort cloud, a hypothetical band of icy rocks thought to lie 7.5 trillion km from the sun, should still be gravitationally bound to our local star and could therefore be considered the edge of the solar system. Voyager 1 has a long way to go before it reaches that distance.
Quelle: WIRED
« Zum vorherigen Eintrag Zum nächsten Eintrag »
3610 Views
Created with page4