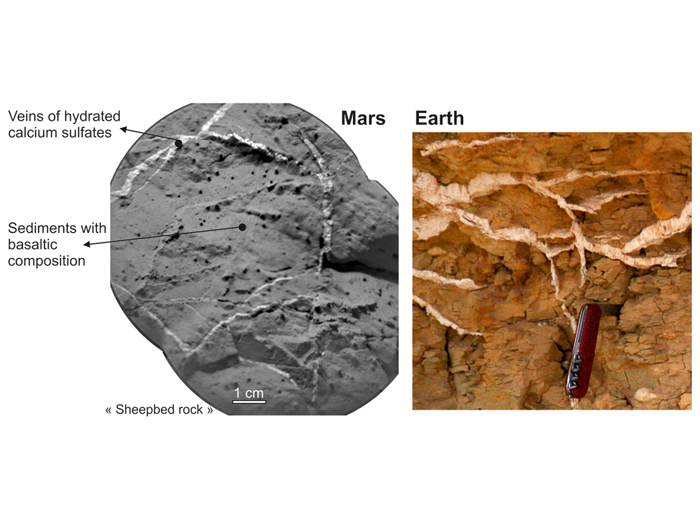 Veins in Rocks on Mars and Earth
This set of images shows the similarity of sulfate-rich veins seen on Mars by NASA's Curiosity rover to sulfate-rich veins seen on Earth. The view on the left is a mosaic of two shots from the remote micro-imager on Curiosity's Chemistry and Camera (ChemCam) instrument on Dec. 14, 2012, or the 126th sol, or Martian day, of operations. They show a view of "Sheepbed" rock in the "Yellowknife Bay" area of Mars. The sulfate-rich veins are the light-colored veins about 1 to 5 millimeters (0.04 to 0.2 inches) wide. The image on the right is from the Egyptian desert on Earth. A pocket knife is shown for scale (image courtesy of Pierre Thomas).
On Earth, calcium sulfates like gypsum form frequently in veins when relatively dilute fluid circulates at low to moderate temperatures.
. 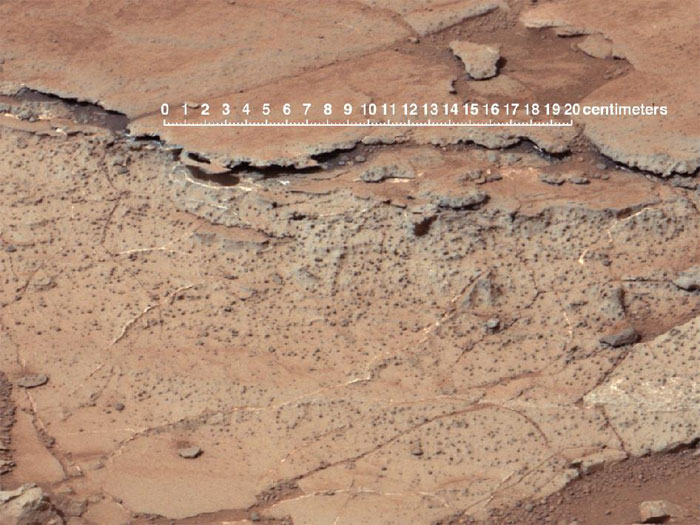 Spherules in 'Yellowknife Bay'
This image from the right Mast Camera (Mastcam) of NASA's Curiosity Mars rover shows roughly spherical features. These are called spherules, and they are common in this stratigraphic unit, the Sheepbed Unit, which defines the lower part of the sequences of strata exposed in "Yellowknife Bay." These features are interpreted as concretions, implying they formed in water that percolated through pores in the sediment. Spherical concretions have previously been discovered in other rocks on Mars.
Mastcam obtained these images on the 139th Martian day, or sol, of Curiosity's surface operations (Dec. 25, 2012). The image has been white-balanced to show what the rock would look like if it were on Earth.
. 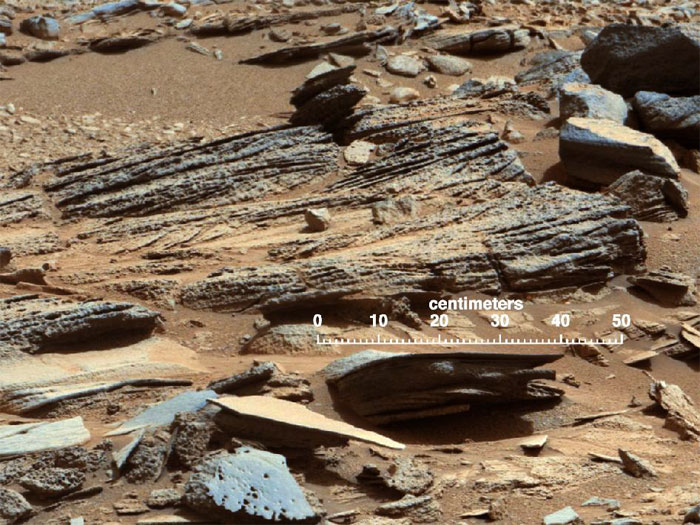 'Shaler' Unit's Evidence of Stream Flow
This image from the Mast Camera (Mastcam) on NASA's Mars rover Curiosity shows inclined layering known as cross-bedding in an outcrop called "Shaler" on a scale of a few tenths of meters, or decimeters (1 decimeter is nearly 4 inches). The superimposed scale bar is 50 centimeters (19.7 inches). See unannotated version.
This stratigraphic unit is called the Shaler Unit. Decimeter-scale cross-bedding in the Shaler Unit is indicative of sediment transport in stream flows. Currents mold the sediments into small underwater dunes that migrate downstream. When exposed in cross-section, evidence of this migration is preserved as strata that are steeply inclined relative to the horizontal -- thus the term "cross-bedding." The grain sizes here are coarse enough to exclude wind transport. This cross-bedding occurs stratigraphically above the Gillespie Unit in the "Yellowknife Bay" area of Mars' Gale Crater, and is therefore geologically younger.
Mastcam obtained the image on the 120th Martian day, or sol, of Curiosity's surface operations (Dec. 7, 2012).
The image has been white-balanced to show what the rock would look like if it were on Earth.
. 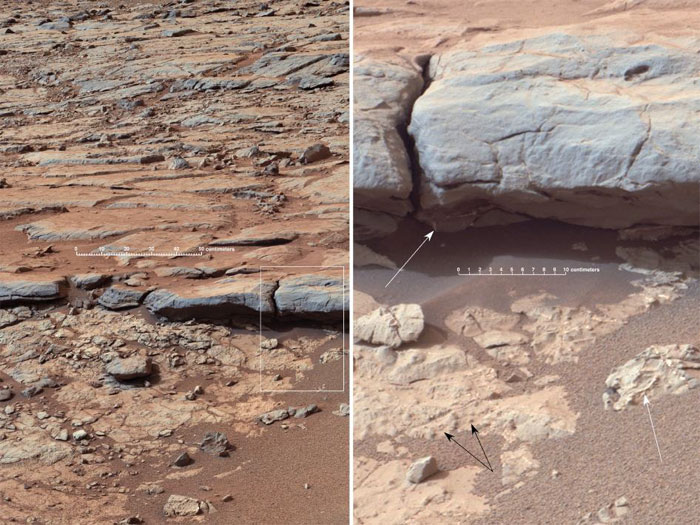 'Yellowknife Bay' Veins and Concretions
The right Mast Camera (Mastcam) of NASA's Curiosity Mars rover provided this view of the lower stratigraphy at "Yellowknife Bay" inside Gale Crater on Mars. The rectangle superimposed on the left image shows the location of the enlarged portion on the right. In the right image, white arrows point to veins (including some under the overhang), and black arrows point to concretions (small spherical concentrations of minerals). Both veins and concretions strongly suggest precipitation of minerals from water.
.

Before and After a Little Dusting
This set of images from NASA's Curiosity rover shows a patch of rock before and after it was cleaned by Curiosity's Dust Removal Tool (DRT). The images, obtained by the Mars Hand Lens Imager (MAHLI), show the first use of the DRT on Jan. 6, 2013, the 150th sol, or Martian day, of operations.
MAHLI took this image from a distance of about 10 inches (25 centimeters) after the brushing was completed on this rock target, called "Ekwir_1." The patch of the rock from which dust has been brushed away is about 1.85 inches by 2.44 inches (47 millimeters by 62 millimeters).
. 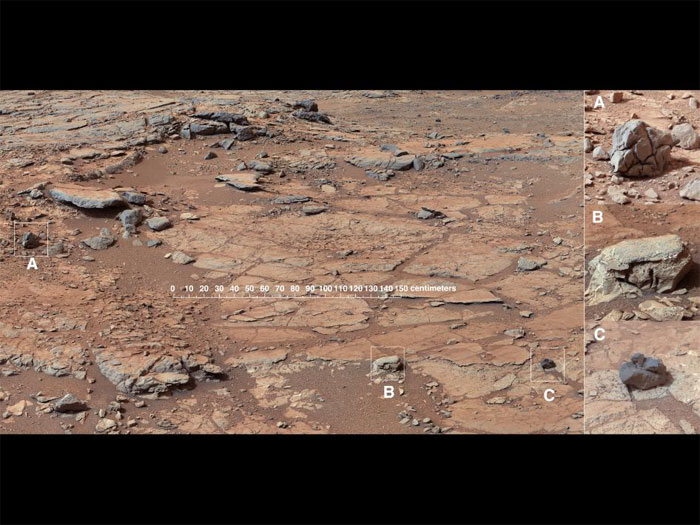 Diversity in Vicinity of Curiosity's First Drilling Target
The right Mast Camera (Mastcam) of NASA's Curiosity Mars rover provided this contextual view of the vicinity of the location called "John Klein," selected as Curiosity's first drilling site. The distance from the camera to John Klein was about 16 feet (5 meters). The scale bar is 150 centimeters (59 inches) long. An unannotated version is also available.
This mosaic was assembled from images acquired on Sol (or Martian day) 138 between 8:30 and 9:25 in the morning, local Mars solar time (on Dec. 25, 2012). It illustrates the diversity of rock types from which the rover team could choose to sample. The enlargements of rocks seen on the right, and denoted by letters and boxes within the left image, represent this diversity. Each box is about 9 inches (22 centimeters) square.
Enlargement A shows a "bread-crusted" rock, whose surface is fractured in a polygonal pattern. This generally reflects a differential change in volume of a rock, with the outer part expanded relative to the interior. Enlargement B is representative of the material that will be sampled at the John Klein site, showing both light-toned veins and dark spots that show the relief of concretions. Enlargement C shows an exotic black rock that is similar in shape to more distant, dark rocks found higher in the local stratigraphy. That rock was probably emplaced here as part of material ejected by a crater-excavating impact.
The image has been white-balanced to show what the rocks would look like if they were on Earth.
. 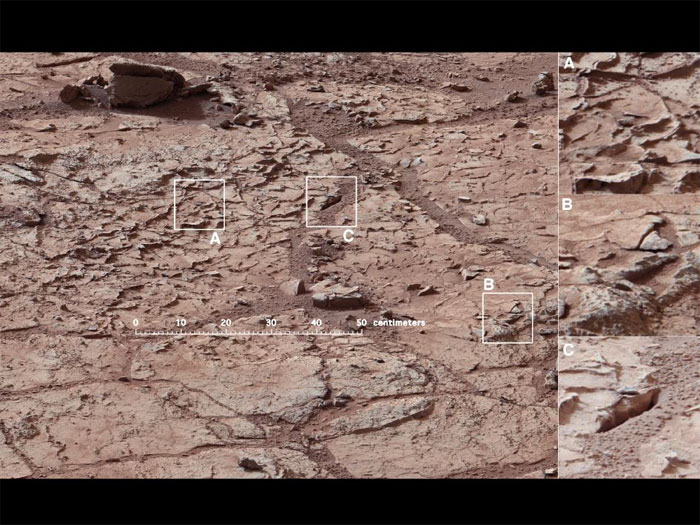 'John Klein' Site Selected for Curiosity's Drill Debut
This view shows the patch of veined, flat-lying rock selected as the first drilling site for NASA's Mars rover Curiosity. The rover's right Mast Camera (Mastcam), equipped with a telephoto lens, was about 16 feet (5 meters) away from the site when it recorded this mosaic's component images, between 3:10 and 3:33 in the afternoon of the 153rd Martian day, or sol, of Curiosity's work on Mars (Jan. 10, 2013).
The area is shot full of fractures and veins, with the intervening rock also containing concretions, which are small spherical concentrations of minerals. The scale bar on the left image is 19.7 inches (50 centimeters) long. On the annotated version, three boxes, each about 4 inches (10 centimeters) across, designate enlargements on the right that illustrate attributes of the area.
Enlargement A shows a high concentration of ridge-like veins protruding above the surface. Some of the veins have two walls and an eroded interior. Enlargement B shows that in some portions of this feature, there is a horizontal discontinuity a few centimeters or inches beneath the surface. The discontinuity may be a bed, a fracture, or potentially a horizontal vein. Enlargement C shows a hole developed in the sand that overlies a fracture, implying infiltration of sand down into the fracture system.
. 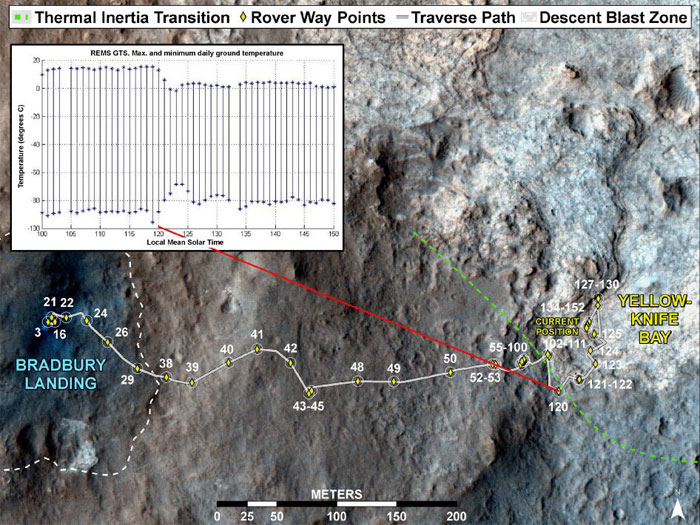 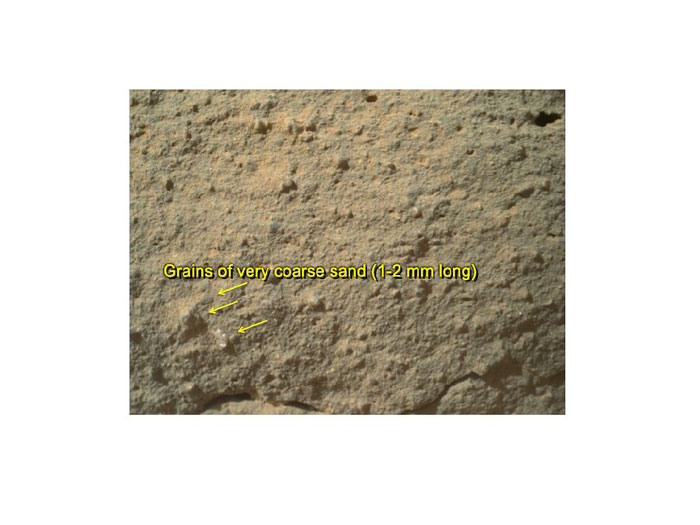 Texture of 'Gillespie Lake' Rock
This image from NASA's Curiosity rover shows the great diversity of grains found on the surface of a Martian rock. The rock, called "Gillespie Lake," was imaged by Curiosity's Mars Hand Lens Imager on Dec. 19, 2012, the 132nd sol, or Martian day, of operations.
The grains highlighted in the annotated version of this image are about 1 to 2 millimeters (0.04 to 0.08 inches) long and the full frame is about 3 to 5 centimeters (1 to 2 inches) across. Some grains look similar to clear crystal in appearance while others are darker and duller in appearance.
. 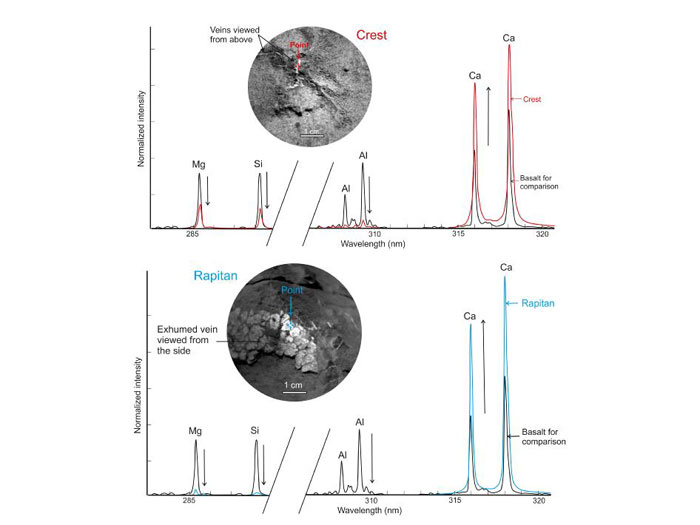 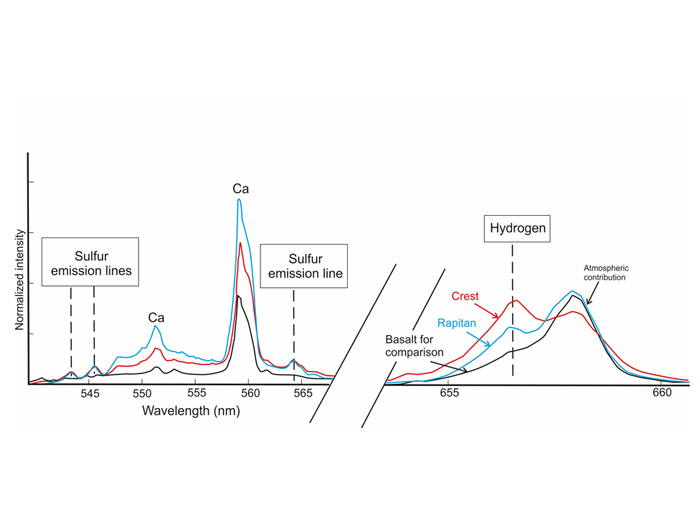 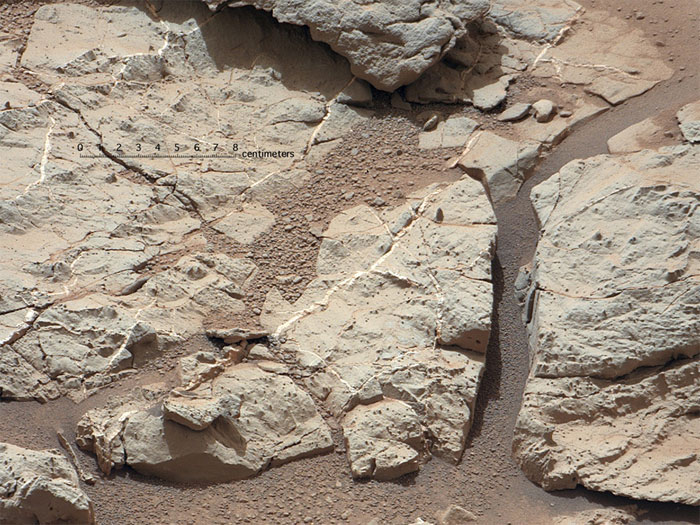 Veins in 'Sheepbed' Outcrop
This image of an outcrop at the "Sheepbed" locality, taken by NASA's Curiosity Mars rover with its right Mast Camera (Mastcam), shows well-defined veins filled with whitish minerals, interpreted as calcium sulfate.
These veins form when water circulates through fractures, depositing minerals along the sides of the fracture, to form a vein. These veins are Curiosity's first look at minerals that formed within water that percolated within a subsurface environment. These vein fills are characteristic of the stratigraphically lowest unit in the "Yellowknife Bay" area -- known as the Sheepbed Unit.
Mastcam obtained these images the 126th Martian day, or sol, of Curiosity's mission on Mars (Dec. 13, 2012). The view covers an area about 16 inches (40 centimeters) across. A superimposed scale bar is 8 centimeters (3.15 inch) long.
.
Quelle: NASA
« Zum vorherigen Eintrag Zum nächsten Eintrag »
3995 Views
Created with page4