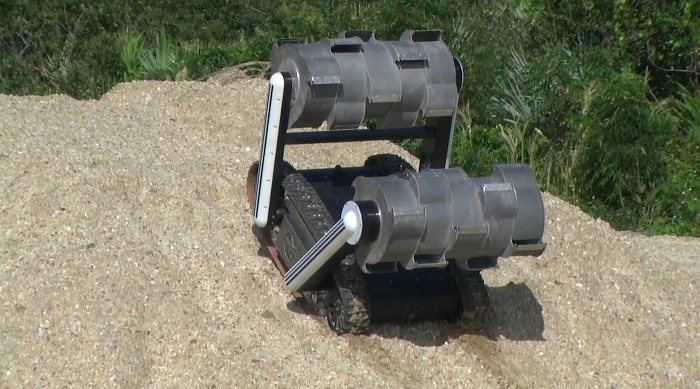 After decades of designing and operating robots full of scientific gear to study other worlds, NASA is working on a prototype that leaves the delicate instruments at home in exchange for a sturdy pair of diggers and the reliability and strength to work all day, every day for years.

Think of it as a blue collar robot.

Dubbed RASSOR, for Regolith Advanced Surface Systems Operations Robot and pronounced "razor," the autonomous machine is far from space-ready, but the earliest design has shown engineers the broad strokes of what their lunar soil excavator needs in order to operate reliably.

"We were surprised at what we could do with it," said Rachel Cox, a Kennedy Space Center engineer on the RASSOR team.

The primary challenge for any digging robot operating off Earth is that they have to be light and small enough to fly on a rocket, but heavy enough to operate in gravity lower than that of Earth.

"The lighter you make your robot, the more difficult it is to do this excavating," said A.J. Nick, an engineer on the RASSOR team.

RASSOR tackles this problem by using digging bucket drums at each end of the robot's body that rotate in opposite directions, giving enough traction on one end to let the opposite side dig into the soil.

The team built a weight off-loading harness that simulated working the rover in the moon's 1/6th gravity field.

"We proved that if you engage one bucket, it pulls itself but when you lower the other bucket and rotate it, once they both catch in, it starts digging," Nick said.

Another secret of the drum, inspired by a previous Lockheed Martin design, is the staggered shallow scoops that shave the soil a bit at a time rather than scoop large chunks of it all at once, the way bulldozers do on Earth.

A concept mission for RASSOR would have a 2000 pound payload in addition to the lander, which would be about the size of the Phoenix lander NASA sent to Mars. The RASSOR is expected to weigh about 100 pounds. The remaining payload would be used to process the lunar soil delivered by RASSOR.

The RASSOR looks like a small tank chassis with a drum at either end, each attached with arms. The drums are perhaps the robot's most innovative feature. Because they are mounted on moving arms, they can act almost as legs letting the robot step and climb over obstacles.

The team calls such moves "acrobatics." They point out that the robot can safely drive off the lander and right itself, flip itself over to get unstuck from fine soil and lift the whole body off the ground to let its treads run smoothly to remove built up soil. RASSOR is designed to easily make itself into a Z-shaped position to drop its soil collection into the hopper.

With the drums positioned above the main body of the robot, it stands about 2 1/2 feet tall.

The robot is designed to skim lunar soil and dump it into a device that would pull water and ice out of the dirt and turn their chemicals into rocket fuel or breathing air for astronauts working on the surface. The device would be part of the lander that carries the RASSOR to the moon's surface. So the robot would be the feeder for a lunar resource processing plant, a level of industry never before tried anywhere besides Earth.

Producing water and fuel from the lunar soil would save the tremendous expense of launching the supplies from Earth, since 90 percent of a rocket’s mass normally consists of propellant, which can be made on the moon.

"This has been kind of the dream, the mission they gear this around," Nick said.

The concept could work on Mars, too, since its soil also is suspected of holding large amounts of water ice.

"There are some areas at the poles where they think there's a lot of ice, so you'd be digging in ice," Nick said. "There's other areas where the water is actually 30 centimeters down so you actually have to dig down 30 centimeters and take off the top and that depth is really where you want to start collecting water ice."

But in order to provide enough material to the production platform to create usable amounts of resources, the RASSOR would need to operate about 16 hours a day for five years. It would drive five times faster than the Mars Curiosity rover's top speed of 4 centimeters per second, then shave the moon's surface with a pair of rotating drums and return to the resource processing plant with some 40 pounds of lunar soil for processing.

"Right now, we just want to make sure nothing in our design precludes it from doing that," said Jason Schuler, one of the engineers on the RASSOR project.

Devising a robot for such demands called for numerous innovations, and the team says it has at least one major decision to make before it begins construction of the second generation RASSOR prototype: keep going with tracks like those that tanks use, or switch to wheels.

The tracks showed some flaws in recent testing, mostly relating to the pebbles and sand particles clogging the gears and making the track slip off. The group tried out RASSOR on several surfaces at Kennedy, including the crushed river rock dug up from the crawlerway. The rock, even though pulverized by the gigantic crawlers, is not a great substitute for lunar soil, the engineers said, but as long as the robot handles that matter well, they say they know it will manage whatever the moon soil offers.

"The mobility was definitely a challenge," Schuler said. "You can't take for granted that it's going to work like it does on grass or concrete or even on sand."

Part of the problem, the engineers said, might be the rubber material the tracks are made of, but a lunar version of the robot would use a different material, possibly metallic. For example, the lunar rover the astronauts drove on the surface used wheels made of stainless steel springs rather than rubber.

A 25-foot-square area has been cleared in part of the engineers' workshop to make room for a large area of imitation lunar soil that will allow the robot to be tested in material close to what it will face on the moon.

The team already is designing RASSOR 2, a prototype that would be much closer to what NASA could launch in the future. It's expected to begin testing in early 2014. 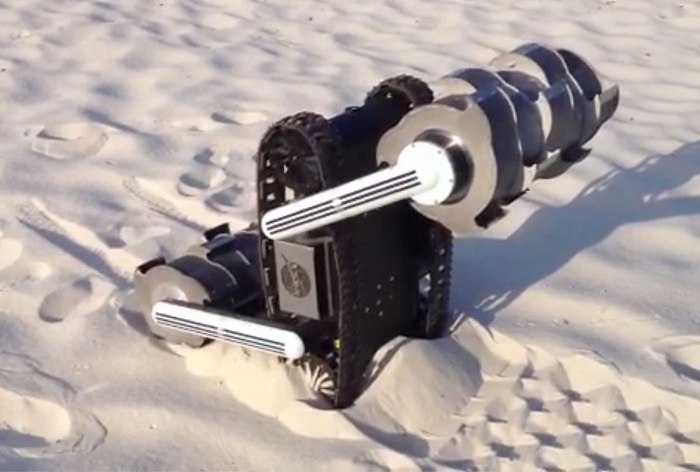 Image above: With a pair of drums positioned on arms, the RASSOR can take on a number of different shapes to accomplish its work. Photo credit: NASA 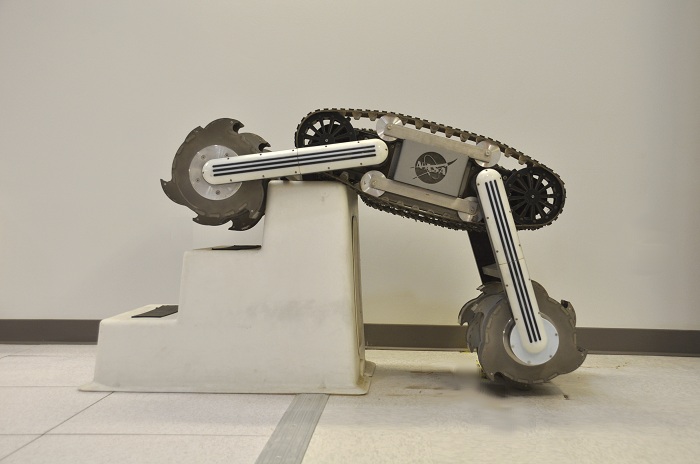 Image above: The RASSOR can climb over a large obstacle, such as a boulder on the moon. Engineers on Earth used a stepping stool to challenge the robot. Photo credit: NASA