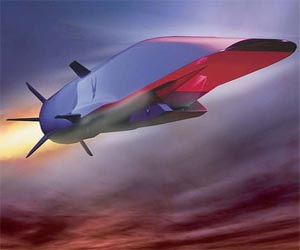 The Russian Defence Ministry will start testing advanced hypersonic missiles in the coming summer. At present, Russia is conducting research in several areas of developing hypersonic technology, but it's unclear which will be successful.
The work on hypersonic vehicles conducted by the Soviet Union and the U.S. during the Cold War was suspended after it was ended. But it has restarted now. Both countries are aimed at creating guided means of destruction which should be an alternative to intercontinental ballistic missiles. This task was set at the dawn of the hypersonic technology.
At present, the main task is to develop an engine capable of giving the vehicle necessary speed. The manoeuvering warheads are not facing this problem because the booster gives them the necessary speed. The present task is to develop a hypersonic reusable vehicle.
This task is being solved in the U.S. where an experimental vehicle X-27 has been developed. Its testing started in 2010. At present, it is making the third orbital flight started in December 2012.
It will continue for several months. The testing is aimed at developing a hypersonic weapon carrier capable of manoeuvering in the orbit and entering the atmosphere to launch attacks on anywhere in the world.
But many problems, such as the designing of the vehicle, developing navigation and communication systems, are yet to be solved to achieve this goal. The traditional radio communication and radio navigation are not working during flights at hypersonic speeds in the atmosphere.
Russian developments of hypersonic vehicles are moving in several directions.
Russian specialists have achieved great success in developing manoeuvering warheads. Such warheads that are heavier and bigger than ordinary ones are capable of manoeuvering in the atmosphere. This excludes their interception by the existing and promising anti-missile defence systems.
A hypersonic missile for the Russian Navy will be developed in the next few years. The Tsirkon anti-ship system should be based on the hypersonic missile that is being developed by Russia and India on the basis of the Bramos missile.
The Russian Air Force is interested in such missiles but the speed of the missiles for it should be more than ten times the speed of sound.
Quelle: Voice of Russia
« Zum vorherigen Eintrag Zum nächsten Eintrag »
3733 Views
Created with page4