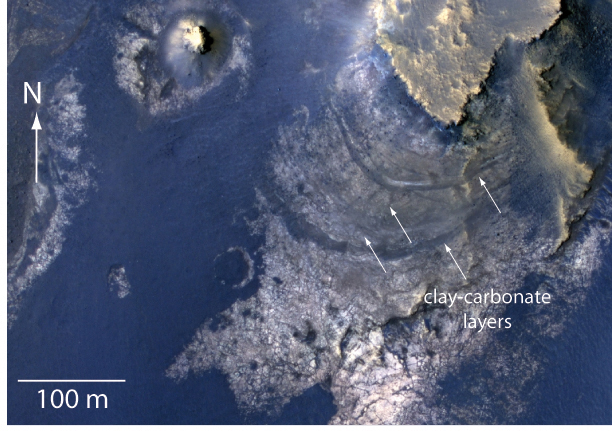 This view of layered rocks on the floor of McLaughlin Crater shows sedimentary rocks that contain spectroscopic evidence for minerals formed through interaction with water. The High Resolution Imaging Science Experiment (HiRISE) camera on NASA's Mars Reconnaissance Orbiter recorded the image.
A combination of clues suggests this 1.4-mile-deep (2.2-kilometer-deep) crater once held a lake fed by groundwater. Part of the evidence is identification of clay and carbonate minerals within layers visible near the center of this image. The mineral identifications come from the Compact Reconnaissance Imaging Spectrometer for Mars (CRISM), also on the Mars Reconnaissance Orbiter.
The scene covers an area about one-third of a mile (about 550 meters) across, at 337.6 degrees east longitude, 21.9 degrees north latitude. North is up. Figure 1 indicates the location of layers bearing clay and carbonate minerals and includes a scale bar of 100 meters (328 feet).
HiRISE is one of six instruments on NASA's Mars Reconnaissance Orbiter. The University of Arizona, Tucson, operates the orbiter's HiRISE camera, which was built by Ball Aerospace & Technologies Corp., Boulder, Colo. NASA's Jet Propulsion Laboratory, a division of the California Institute of Technology in Pasadena, manages the Mars Reconnaissance Orbiter Project for NASA's Science Mission Directorate, Washington. Lockheed Martin Space Systems, Denver, built the spacecraft.
-
Martian Crater Once May Have Held Groundwater-Fed Lake
PASADENA, Calif. -- A NASA spacecraft is providing new evidence of a wet underground environment on Mars that adds to an increasingly complex picture of the Red Planet's early evolution.
The new information comes from researchers analyzing spectrometer data from NASA's Mars Reconnaissance Orbiter (MRO), which looked down on the floor of McLaughlin Crater. The Martian crater is 57 miles (92 kilometers) in diameter and 1.4 miles (2.2 kilometers) deep. McLaughlin's depth apparently once allowed underground water, which otherwise would have stayed hidden, to flow into the crater's interior.
Layered, flat rocks at the bottom of the crater contain carbonate and clay minerals that form in the presence of water. McLaughlin lacks large inflow channels, and small channels originating within the crater wall end near a level that could have marked the surface of a lake.
Together, these new observations suggest the formation of the carbonates and clay in a groundwater-fed lake within the closed basin of the crater. Some researchers propose the crater interior catching the water and the underground zone contributing the water could have been wet environments and potential habitats. The findings are published in Sunday's online edition of Nature Geoscience.
"Taken together, the observations in McLaughlin Crater provide the best evidence for carbonate forming within a lake environment instead of being washed into a crater from outside," said Joseph Michalski, lead author of the paper, which has five co-authors. Michalski also is affiliated with the Planetary Science Institute in Tucson, Ariz., and London's Natural History Museum.
Michalski and his co-authors used the Compact Reconnaissance Imaging Spectrometer for Mars (CRISM) on MRO to check for minerals such as carbonates, which are best preserved under non-acidic conditions.
"The MRO team has made a concerted effort to get highly processed data products out to members of the science community like Dr. Michalski for analysis," said CRISM Principal Investigator Scott Murchie of the Johns Hopkins University Applied Physics Laboratory in Laurel, Md. "New results like this show why that effort is so important."
Launched in 2005, MRO and its six instruments have provided more high-resolution data about the Red Planet than all other Mars orbiters combined. Data is made available for scientists worldwide to research, analyze and report their findings.
"A number of studies using CRISM data have shown rocks exhumed from the subsurface by meteor impact were altered early in Martian history, most likely by hydrothermal fluids," Michalski said. "These fluids trapped in the subsurface could have periodically breached the surface in deep basins such as McLaughlin Crater, possibly carrying clues to subsurface habitability."
McLaughlin Crater sits at the low end of a regional slope several hundreds of miles long on the western side of the Arabia Terra region of Mars. As on Earth, groundwater-fed lakes are expected to occur at low regional elevations. Therefore, this site would be a good candidate for such a process.
"This new report and others are continuing to reveal a more complex Mars than previously appreciated, with at least some areas more likely to reveal signs of ancient life than others," said MRO project scientist Rich Zurek of NASA's Jet Propulsion Laboratory (JPL) in Pasadena, Calif.
The Johns Hopkins University Applied Physics Laboratory in Laurel, Md., provided and operates CRISM. JPL manages MRO for NASA's Science Mission Directorate in Washington. Lockheed Martin Space Systems in Denver built the orbiter.
-
Quelle: NASA
« Zum vorherigen Eintrag Zum nächsten Eintrag »
4378 Views
Created with page4