At first glance, recovery operations of NASA's Orion spacecraft look much like the efforts used to recover its Apollo predecessor. However, many design and technological upgrades have been added to the new spacecraft by teams at NASA's Kennedy Space Center in Florida and Johnson Space Center in Houston. NASA also is partnering with the U.S. Navy to develop procedures to recover the Orion capsule and crew after splashdown.
All of Orion's subsystems and components created around the country come together in the Operations and Checkout Building at Kennedy. The unique benefit of this complete on-site operation enables the tem to efficiently build the spacecraft, move it directly onto the launch vehicle and then out to the launch pad. Conducting all these operations in one location saves the government transportation costs associated with tests and checkout prior to launch.
The Orion spacecraft is designed to meet the evolving needs of our nation's space program for decades to come. It will to take crews of up to four astronauts on missions to deep space, including to asteroids and, eventually, to Mars. Orion has already passed rigorous human rating reviews and has met critical milestones for safe, successful human space flight. The spacecraft incorporates major advances over capsules of decades past and capabilities beyond those of the space shuttle.
The first key Orion recovery test, scheduled for August 2013, will take place at Naval Station Norfolk, in Virginia. The second major test is planned for January 2014 at Navy Base San Diego. The tests are part of preparations the first flight of Orion, Exploration Flight Test-1 (EFT-1), in September 2014.
"The overall testing strategy uses a building block approach that we call a 'crawl-walk-run' strategy," said Jim Hamblin, landing and recovery operations manager for NASA Ground Systems Development and Operations.
Validations of Orion's recovery systems already have been taking place in small steps Hamblin noted.
"In December of 2011, we placed an Orion mockup in the Trident Turn Basin at Port Canaveral (in Florida)," he said. "That allowed us to check out basic procedures such as attaching the stabilization collar."
During tests in Yuma, Ariz., earlier this year, a boilerplate crew module was dropped from an aircraft successfully verifying the parachute system. At Johnson’s Neutral Buoyancy Laboratory, U.S. Navy dive teams also have received training in the newly-developed recovery procedures.
"During the simulations next August, we'll be conducting a two-day stationary recovery test to evaluate hardware and recovery processes in a controlled, benign environment," Hamblin said. "That's what we're calling the 'crawl phase.' In this test we'll utilize the Navy's USS Mesa Verde, a landing platform-dock, or LPD, ship."
The LPD is an amphibious ship that has both a flight deck and a well deck. The well deck is in the lower portion of the ship and has a large door on the stern of the ship that can be opened to support the coming and going of landing craft or other amphibious vehicles. Use of a Navy LPD, instead of an aircraft carrier, is one of the most obvious differences in the recovery of Orion compared to the retrieval of the Mercury, Gemini and Apollo spacecraft.
"This is a new approach and is preferred due to the LPD's low cost, highly capable tracking radar and ability to launch helicopters from its flight deck," Hamblin said.
The Norfolk test involves working with an LPD while docked at the port to perfect the process of bringing in the Orion capsule with the crew aboard. The test will start at the point in the recovery operation in which the recovery divers, using small, raft-like boats are ready to approach the capsule.
Small boat teams, staffed by U. S. Navy divers, will conduct a hazard assessment of the crew module to verify it is safe to approach without personal protection equipment.
"The Navy dive teams are crucial to the recovery operation," Hamblin said. "After the crew module is stabilized, boat teams will attach a winch line from inside the well deck of the ship and start pulling it in. Lines from small boats will also be attached to the spacecraft to bring it to the stern of the Navy ship."
When the crew module is inside the stern gate, the winching operation is temporarily halted. The small boat teams connect tending lines to Orion, and ship line handlers guide the spacecraft over the recovery cradle on the well deck.
"Before approaching the recovery cradle, the ship's stern gate is raised 45 degrees to calm the waters inside the well deck," said Hamblin. "The crew module is then positioned over the cradle, and the well deck is drained to seat the spacecraft into the cradle."
The second major test, scheduled for January 2014, is a four-day Underway Recovery Test.
"This will be the 'walk, then run phase' conducted on the LPD USS San Diego at sea on the west coast near San Diego," said Hamblin. "Its purpose is to evaluate hardware and recovery processes in progressively more challenging environments to determine capability limits."
Once EFT-1 is complete with splashdown off the California coast, the Navy ship will be brought to the pier in Long Beach, Calif., and the crew module towed from the well deck to a barge. After arrival, NASA will turn the crew module over to Lockheed Martin, the Orion prime contractor, for required post-flight operations.
"The testing in Norfolk and off the coast of San Diego will ensure we're ready for EFT-1," Hamblin said.
-

Image above: In this artist's concept, U.S. Navy boat teams have attached a line from inside the well deck of the landing platform-dock ship (LPD)to start pulling in the Orion crew module. Lines from small boats will also be attached to bring the capsule inside the stern of the LPD. Image credit: NASA
- 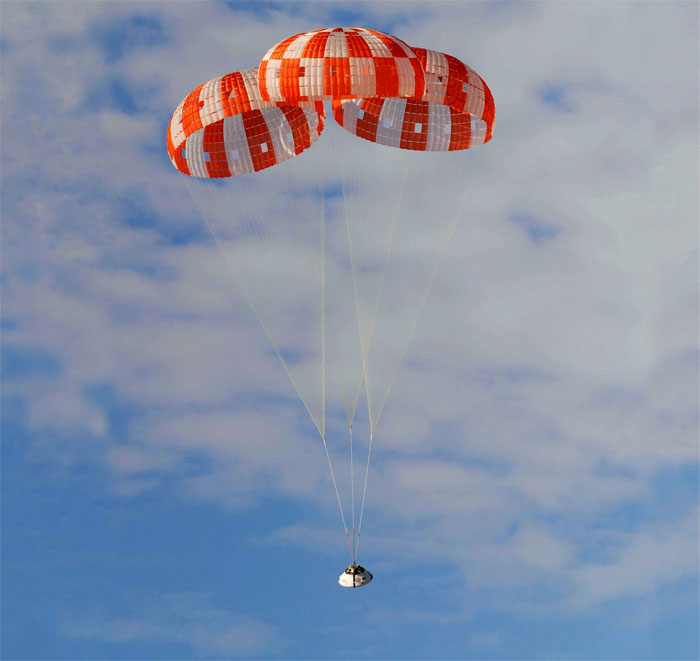 Image above: The Orion parachutes have been through a series of tests at the U.S. Army Yuma Army Proving Grounds in southwestern Arizona. In July, a C-17 plane dropped a test version of the spacecraft from an altitude of 25,000 feet using an Orion craft that mimics the full size and shape of the crew module. Photo credit: NASA
- 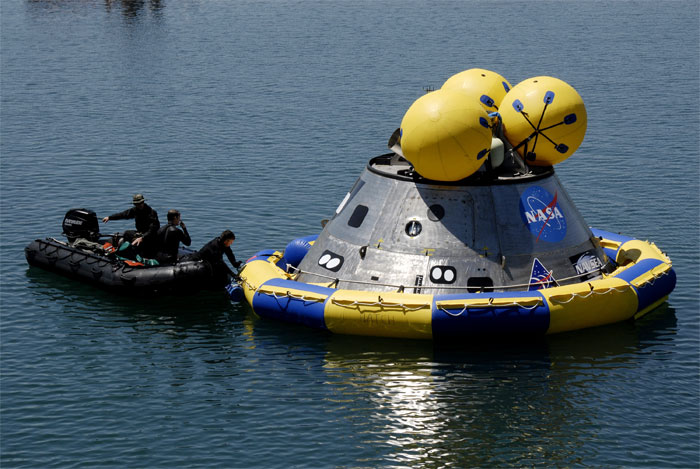 Image above: Members of the U.S. Air Force 920th Rescue Wing secure a flotation collar around the mockup Orion crew module at the Trident Basin at Port Canaveral, Fla. during testing in 2009. The post-landing Orion Recovery Test helped determine what kind of motion astronauts will experience after landing, as well as what recovery teams should expect. Photo credit: NASA/Kim Shiflett
-

Image above: An Orion crew module has been positioned on a GSDO-provided stand, called a recovery cradle, in the LPD well deck. In this artist’s concept, the NASA recovery team is positioning the stand to allow access and assist the crew in getting out of the spacecraft. Image credit: NASA
-
Quelle: NASA
« Zum vorherigen Eintrag Zum nächsten Eintrag »
4580 Views
Created with page4