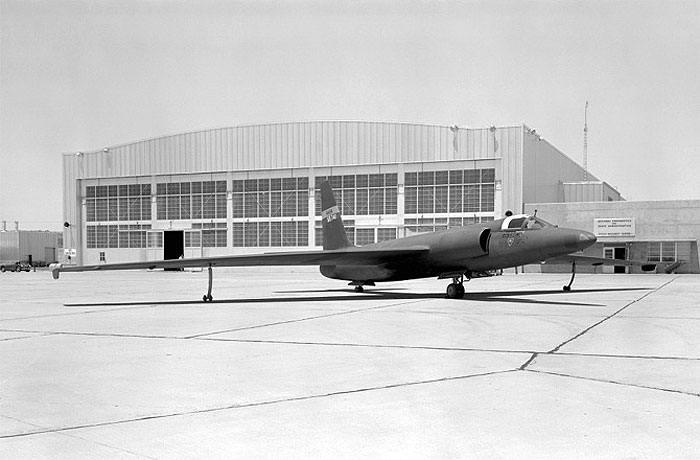 Image: The U-2 with NASA markings at the Flight Research Centre at Edwards Air Force Base on May 6, 1960. Credit: NASA

On May 1, 1960, Gary Powers’ U-2 was shot down over Sverdlosk in the Soviet Union. When he heard the news, the pilot’s fate wasn’t President Eisenhower’s only concern; Powers had been flying a plane that wasn’t supposed to exist on a mission that wasn’t supposed to exist. In need of a cover story, the President turned to NASA.
The U-2 was built on Eisenhower’s request as a lightweight high altitude reconnaissance aircraft. Conceived in 1954, it was reminiscent of a glider with its 103 foot wingspan dwarfing its 63 foot long fuselage. This high lift design combined with its extremely low weight (it weighed just 17,000 pounds on its first flight) enabled the U-2 to cruise at over 70,000 feet. But even from this formidable height cameras could could resolve individual missiles at Soviet firing ranges. The lenses were just that good.
ANALYSIS: Kennedy’s Proposed US-Soviet Moon Mission
Right from the start, the problem for Eisenhower was that he couldn’t divulge the U-2′s real purpose. When the aircraft began flying reconnaissance missions in 1956, the President had NASA’s predecessor organization the National Advisory Committee for Aeronautics lay a cover story. On May 7, the agency’s director Hugh Dryden issued a press release saying that the U-2 was an NACA research plane designed to fly high altitude meteorological flight with Air Force support from a base in Watertown, Nevada. A second press release on May 22 gave a similar story to account for U-2s flights overseas.
The “weather flights” story was reused to account for Powers’ disappearance. On Thursday May 5, 1960, NASA issued a press release saying a U-2 had gone missing over Turkey during a routine meteorology flight.
“One of NASA’s U-2 Research Airplanes, in use since 1956 in a continuing program to study gust-meteorological conditions found at high altitude, has been missing since about 9 o’clock Sunday morning… when its pilot reported he was having oxygen difficulties over the Lake Van, Turkey area.” It went on to detail a non-existent mission.
ANALYSIS: The Psychology of Sputnik
The airplane took off from Incirlik Air Base at 8 a.m. local time on a flight path through Turkish airspace. But an hour into the flight, the pilot “reported difficulties with his oxygen equipment.” Over his emergency radio frequency he announced that he was heading towards a beacon point near Lake Van. “It is believe he probably was on a northeasterly course, but there was no further word.” NASA lost contact with the pilot over southern Turkey.
Air searches revealed no evidence of a crash around Lake Van, suggesting that the pilot was still alive. If this was the case, he should not be treated as a war criminal. NASA stressed that all its U-2 pilots are civilians, employed either by the agency or the aircraft’s manufacturer Lockheed. These men have no military affiliation save a working relationship with the U.S. Air Force, which facilitated these civilians’ presence overseas.
The release details the instruments onboard the U-2, basic flight systems and specialized instruments designed to measure things like air turbulence, wind shear, and water vapor in the atmosphere. There were even instruments to measure the presence and effect of cosmic rays at high altitudes. This explained the U-2 cruising height of 55,000 feet.
ANALYSIS: Was Roswell ‘Flying Saucer’ Mystery a Soviet Plot?
To support this press release, NASA offered proof. At the agency’s Flight Research Center at Edwards Air Force Base, a U-2 was hastily adorned with a yellow “NASA” tail stripe and a registration number. The aircraft was put on display before the media on May 6.
Of course, none of this was real. Powers wasn’t a civilian on a weather flight and NASA didn’t have its own U-2s for research flights. The registration number painted on the aircraft was bogus.
And the story didn’t hold. On May 7, Soviet Premier Nikita Khrushchev publicly announced that the “missing meteorological aircraft” was an American spy plane; Soviet MiGs had shot it down in Soviet airspace. The pilot along with what was obviously espionage equipment had been recovered from the crash site. Khrushchev’s proof trumped NASA’s – pieces of the wrecked plane were put on display.
The reconnaissance flights over the Soviet Union did nothing to calm growing Cold War tensions. Losing a U-2, having a pilot taken prisoner in an enemy nation, and a poor cover for the whole ordeal was an embarrassment to the Eisenhower administration.
.
Quelle:beta-news
« Zum vorherigen Eintrag Zum nächsten Eintrag »
4194 Views
Created with page4