In mid-January, NASA will take the next step in advancing robotic satellite-servicing technologies as it tests the Robotic Refueling Mission, or RRM aboard the International Space Station. The investigation may one day substantially impact the many satellites that deliver products Americans rely upon daily, such as weather reports, cell phones and television news.
During five days of operations, controllers from NASA and the Canadian Space Agency will use the space station's remotely operated Special Purpose Dexterous Manipulator, or Dextre, robot to simulate robotic refueling in space. Operating a space-based robotic arm from the ground is a feat on its own, but NASA will do more than just robotics work as controllers remotely snip wires, unscrew caps and transfer simulated fuel. The team also will demonstrate tools, technologies and techniques that could one day make satellites in space greener, more robust and more capable of delivering essential services to people on Earth.
Why Fix or Refuel a Satellite?
"Every satellite has a lifespan and eventual retirement date, determined by the reliability of its components and how much fuel it can carry," explains Benjamin Reed, deputy project manager of NASA's Satellite Servicing Capabilities Office, or SSCO.
Repairing and refueling satellites already in place, Reed asserts, can be far less expensive than building and launching entirely new spacecraft, potentially saving millions, even billions of dollars and many years of work.
The RRM demonstration specifically tests what it would take to repair and refuel satellites traveling the busy space highway of geosynchronous Earth orbit, or GEO. Located about 22,000 miles above Earth, this orbital path is home to more than 400 satellites, many of which beam communications, television and weather data to customers worldwide.
By developing robotic capabilities to repair and refuel GEO satellites, NASA hopes to add precious years of functional life to satellites and expand options for operators who face unexpected emergencies, tougher economic demands and aging fleets. NASA also hopes that these new technologies will help boost the commercial satellite-servicing industry that is rapidly gaining momentum.
Besides aiding the GEO satellite community, a capability to fix and relocate "ailing" satellites also could help manage the growing orbital debris problem that threatens continued space operations, ultimately making space greener and more sustainable.
How RRM Is Making a Difference
Built by SSCO in the span of 18 months, the washing-machine-sized RRM module contains the components, activity boards and tools to practice several of the tasks that would be performed in orbit during a real servicing mission. Launched to the space station on July 8, 2011, aboard the final mission of the Space Shuttle Program, RRM was the last payload an astronaut ever removed from a shuttle.
In 2012, RRM demonstrated dexterous robotic operations in space. Dextre's 12-foot arm and accompanying RRM tool successfully snipped two twisted wires -- each the thickness of two sheets of paper -- with only a few millimeters of clearance: a task essential to the satellite refueling process.
- 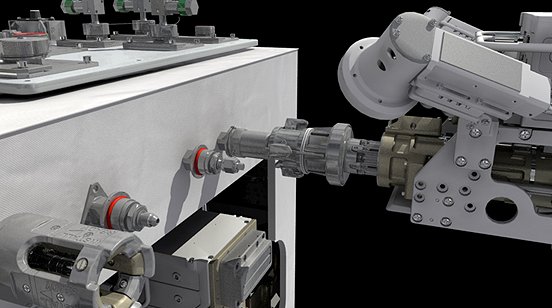 This artist's concept shows a scene from the upcoming refueling demo aboard the International Space Station. The Robotic Refueling Mission, or RRM, Multifunction Tool (right) removes a cap from the RRM module (left). (NASA)
- 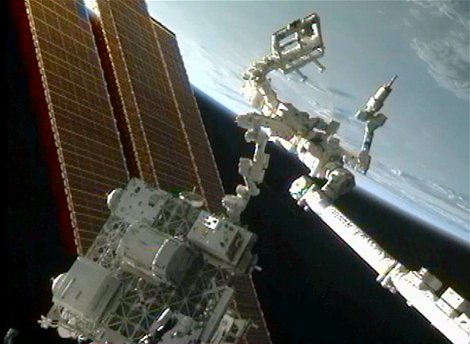 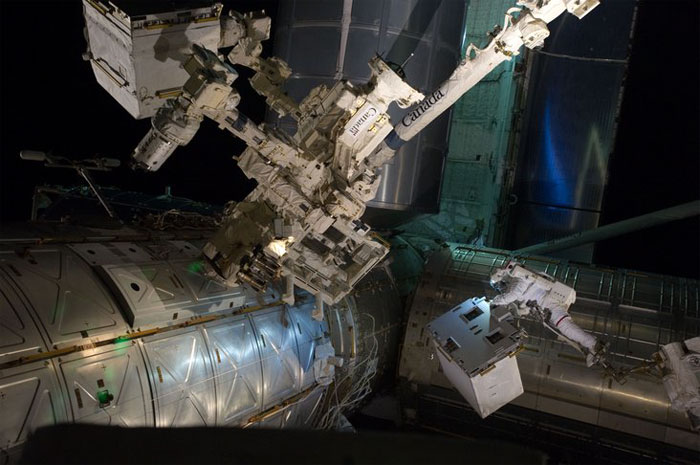 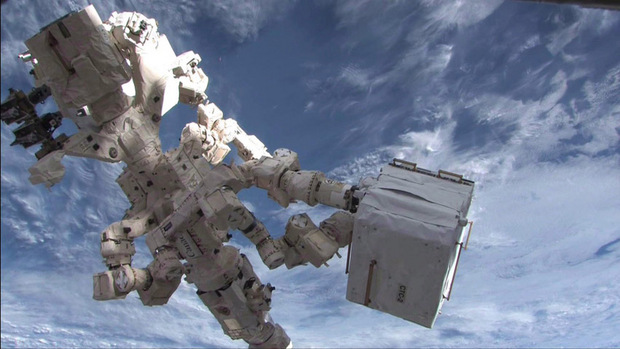 The Canadian-built robot handyman aboard the International Space Station is attempting to demonstrate for the first time that a machine can carry out the delicate task of refueling a satellite in orbit.
The robot, Dextre — short for Special Purpose Dexterous Manipulato, has been aboard the space station since 2008 and is what the Canadian Space Agency calls the most sophisticated space robot ever built.
Overnight Monday, the 3.65-metre tall robot, which weighs in at 1,560 kilograms, started the first of what's expected to be a five-day mission to safely refuel the satellite.
Throughout the process Dextre will be attached to the end of Canadarm2, the robotic arm outside the ISS that helps with assembly and maintenance.
To help him work on the satellite, Dextre will be supporting a 250-kilogram, washing machine-sized, module designed by NASA that's equipped with 28 different tools — including wire cutters and a nozzle tool.
The Canadian agency says the fuel tank on the satellite is protected by a series of seals, nuts and safety caps to prevent any hazardous leaks and Dextre's first job will be to remove a tertiary cap attached to a tether wire.
The space agency describes the set-up as similar to that on an automobile.
In March, Dextre completed a three-day experiment which included a series of tasks and simulations as preparation.
Satellites are not designed to be touched following their launch, so many become space junk once they run out of fuel.
-
Quelle: cbc-news
« Zum vorherigen Eintrag Zum nächsten Eintrag »
4428 Views
Created with page4