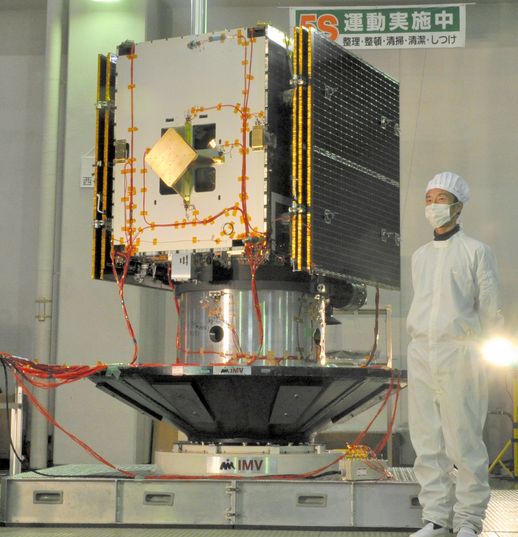 Hayabusa 2 is shown to reporters on Dec. 26 on the Japan Aerospace Exploration Agency’s Sagamihara campus in Kanagawa Prefecture. It weighs 600 kilograms, up 90 kg from the original Hayabusa. The solar cell panels on both sides are designed to open in space. (Seiji Tanaka)

The Japan Aerospace Exploration Agency (JAXA) showed reporters on Dec. 26 the body of its new asteroid-exploring space probe, Hayabusa 2, which is scheduled to be launched as early as 2014.

The Hayabusa 2 is the successor to the original Hayabusa space probe, which brought back particles from an asteroid to Earth for the first time.

Almost the same size as the original Hayabusa, the Hayabusa 2 will incorporate new, improved technologies that were developed on lessons learned from the 6 billion kilometer (3.73 billion miles) journey of the original space probe to the asteroid Itokawa.

With a 2014 launch date, the destination of the Hayabusa 2 is asteroid “1999 JU3.” JAXA scientists believe there are likely to be water and organic materials on 1999 JU3.

JAXA plans to create an artificial crater by dropping a copper plate accelerated by explosives so that Hayabusa 2 will be able to sample and bring back underground sand that has not been exposed to sunlight and solar winds.

If water and organic materials are found, they may provide a clue to the origins of life.

Like the original Hayabusa, the new probe will use an ion engine as its main propulsion device, which was developed for long-distance navigation.

Because the original space probe experienced several glitches, JAXA has improved the durability of the engine and also raised the propulsion by 20 percent or more from the original one.

Hayabusa 2 is slated to arrive at the asteroid in 2018, and stay there one and a half years. It will return to Earth in 2020.