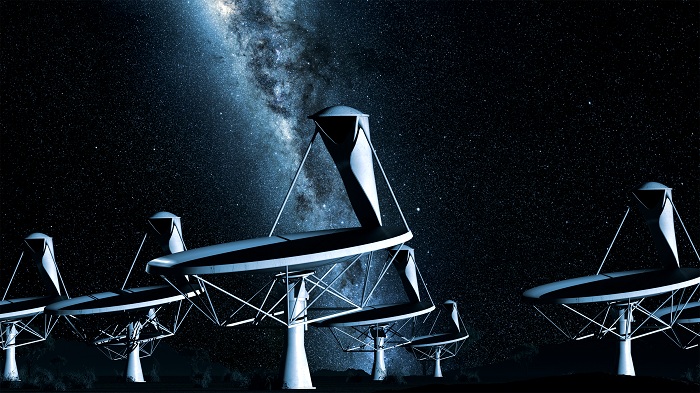 20 December 2012, Manchester, UK – The Board of Directors of the Square Kilometre Array (SKA) Organisation has approved Germany, represented by the Federal Ministry of Education and Research (BMBF), as the tenth member of the organisation to participate in the detailed design of the SKA telescope.

The SKA will be the largest and most sensitive radio telescope ever built. It will enable astronomers to glimpse the formation and evolution of the very first stars and galaxies after the Big Bang, investigate the nature of gravity, and possibly even discover life beyond Earth.

Professor John Womersley, chair of the board of the SKA Organisation, welcomed Germany’s membership. “Germany has an excellent track record not only in radio astronomy but also in the management and delivery of science megaprojects and associated engineering. This expertise will be of great benefit to the SKA project as we move towards the construction phase of this inspirational telescope”, he said.

Dr Beatrix Vierkorn-Rudolph, Deputy Director General, Federal Ministry of Education and Research and Professor Michael Kramer, Director of Max-Planck-Institut für Radioastronomie, an institute of the Max-Planck-Gesellschaft (MPG), have been appointed to represent Germany on the SKA Board of Directors. The German contribution to the SKA Organisation amounts to 1 million Euro and is financed 50% each by BMBF and MPG.

“We live in an exciting time for science and the unprecedented scale of the multi-national SKA project ensures that we will continue to be able to push the boundaries of physics and astronomy. The SKA genuinely has the potential to completely transform our understanding of the universe as we know it today”, says Professor Kramer.

Germany joins the SKA Organisation at the end of what has been an exciting first year for the newly formed organisation. In May 2012 the members of the SKA Organisation agreed on a dual site for the SKA to maximise on investments already made at the candidate sites in Australia and South Africa. Both sites offer exceptionally radio quiet environments for detecting very faint radio waves from the early universe and many thousands of SKA receptors will soon be constructed across these two desert regions. In September Professor Philip Diamond was appointed as the first permanent Director General of the SKA Organisation and in November staff moved into the new purpose-built SKA headquarters at Jodrell Bank Observatory near Manchester in the UK.

As a member of the SKA Organisation, Germany has voting rights and is eligible to appoint two representatives to the Board of Directors. The SKA Board of Directors has the authority to appoint senior staff, decide budgets, admit new project partners to the organisation and direct the work of the global work package consortia in the SKA pre-construction phase.

The Square Kilometre Array will be the world’s largest and most sensitive radio telescope. The total collecting area will be approximately one square kilometre giving 50 times the sensitivity, and 10 000 times the survey speed, of the best current-day telescopes. The SKA will be built in Southern Africa and in Australia. Thousands of receptors will extend to distances of 3 000 km from the central regions. The SKA will address fundamental unanswered questions about our Universe including how the first stars and galaxies formed after the big bang, how dark energy is accelerating the expansion of the Universe, the role of magnetism in the cosmos, the nature of gravity, and the search for life beyond Earth. Construction of phase one of the SKA is scheduled to start in 2016. The SKA Organisation, with its headquarters at Jodrell Bank Observatory, near Manchester, UK, was established in December 2011 as a not-for-profit company in order to formalise relationships between the international partners and centralise the leadership of the project.

Members of the SKA Organisation as of December 2012: