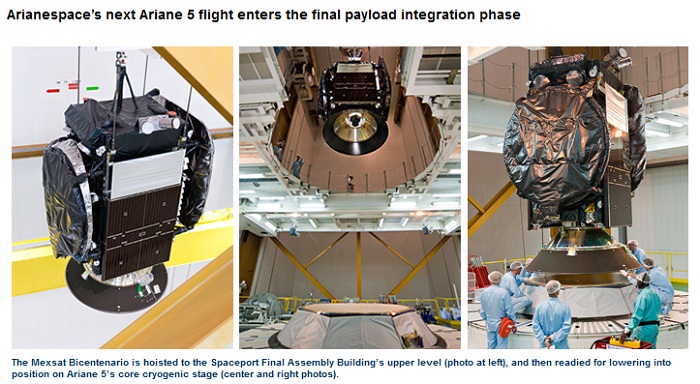 The seventh Ariane 5 for liftoff in 2012 from French Guiana has begun its final payload integration process at the Spaceport , marking a new preparatory step for this December 19 mission with the Mexsat Bicentenario and Skynet 5D satellites.

During activity in the Spaceport’s Final Assembly Building, Mexsat Bicentenario was positioned atop Ariane 5’s core section – becoming the lower passenger in the launcher’s payload “stack.”  It will be deployed after the separation of Skynet 5D, which will ride as the Ariane 5’s upper passenger. 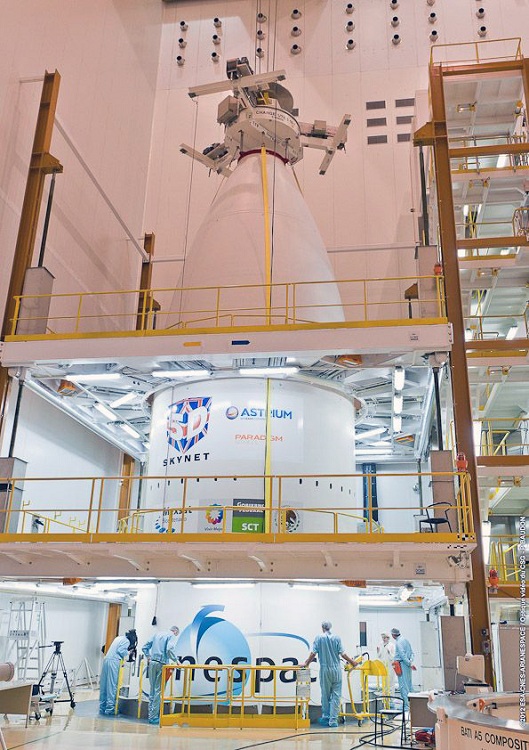 The payload fairing containing Skynet 5D is readied in the Spaceport’s Ariane 5 Final Assembly Building for installation atop its launcher.

The Skynet 5D satellite has joined its Mexsat Bicentenario co-passenger on Ariane 5, marking a new milestone in preparations for Arianespace’s seventh and final heavy-lift flight of 2012 from the Spaceport in French Guiana – scheduled for December 19.

Encapsulated in an ogive-shaped payload fairing, Skynet 5D was lowered into place on Tuesday over Mexsat Bicentenario – which had been installed atop Ariane 5’s cryogenic core stage during activity the previous day inside the Spaceport’s launch vehicle Final Assembly Building.

Skynet 5D is riding as the upper passenger in Ariane 5’s payload “stack,” to be deployed first in the launch sequence. This is the fourth satellite in the Skynet 5 series built by Astrium, which is the prime contractor for the British military satellite program – operated as a Private Finance Initiative with the United Kingdom’s Ministry of Defence.

The Astrium Services business of Astrium operates the Skynet military satellite constellation and the ground network for all beyond-line-of-sight communications to the U.K. Ministry of Defence and the Cabinet Office. Astrium Services also provides Skynet-based communication services to other forces around the world, including the United States, Portugal and Australia.

Larger fuel tanks on this latest Skynet spacecraft will enable it to be repositioned more frequently to meet operational needs. Skynet 5D will extend the total commercially-owned X-band (Super High Frequency) to over 2 GHz of high powered beams across the globe.  To provide additional UHF capacity on Skynet 5D for military and government customers worldwide, Astrium Services earlier this year signed a multi-million dollar contract with Harris CapRock.

The Mexsat Bicentenario passenger to be launched December 19 with Skynet 5D on Ariane 5 is based on Orbital Sciences Corporation’s GEOStar-2 spacecraft platform. It will provide communications services to Mexico and its surrounding waters from the 114.9 deg. West Longitude orbital slot and has a design mission lifetime of 15 years.

Orbital was selected by Boeing to provide the Fixed Satellite Services (FSS) segment of the Mexsat satellite system for the Federal Government of Mexico, with this contribution consisting of the Mexsat Bicentenario spacecraft and the FSS ground segment – including satellite command and control ground equipment and software, as well as training and operational documentation.

The year-ending Ariane 5 mission with Mexsat Bicentenario and Skynet 5D is designated Flight VA211 in Arianespace’s numbering system, signifying the 211th liftoff for an Ariane family vehicle from the Spaceport. 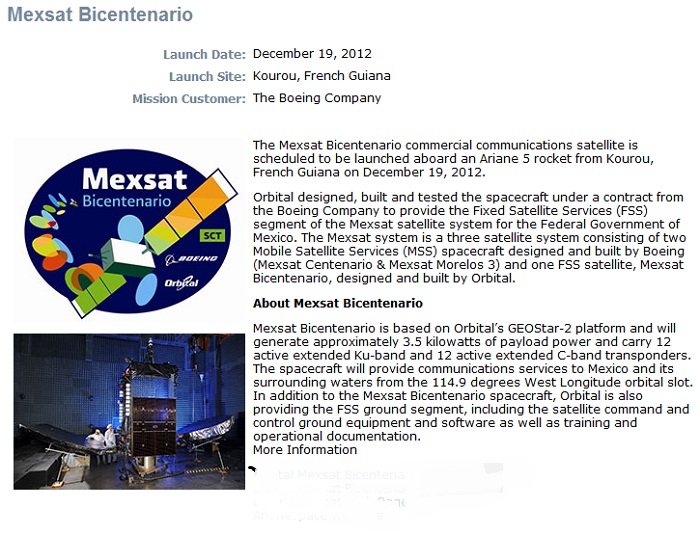