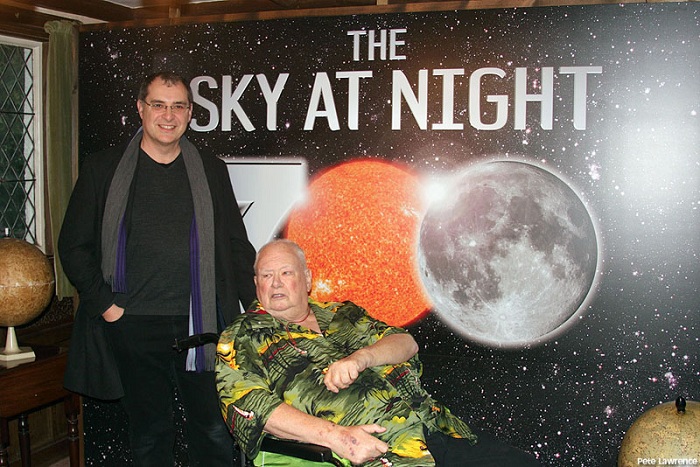 The death of Sir Patrick Moore, at the age of 89, is a sad loss to astronomy and for all those who grew up with his iconic BBC programme The Sky at Night.

Patrick will be remembered for bringing astronomy into the homes of millions but few will be aware that he attributed his big break in TV to flying saucers.

In his autobiography 80 Not Out, Moore credited his appearance on an obscure BBC television programme ‘Flying Saucers – do they exist?’ in 1956 as the launch pad for his career as Britain’s favourite TV astronomer:

‘I have often been asked how I managed to break into it [television], and the answer is that I made no conscious effort at all; the idea came from the BBC…so far as I was concerned the whole chain of events began with flying saucers.’

In fact, his interest in UFOlogy can be traced back to 1950s when he interviewed Desmond Leslie and George Adamski for the long-running BBC programme Panorama.  Adamski had become a minor celebrity at the time because of the success of his 1953 book Flying Saucers Have Landed. The book told a wildly improbable story of his meeting with a tall, blond alien called Orthon from Venus who landed in the Mojave Desert.  In 2006 Moore told me that he and Desmond Leslie, Adamski's co-author, were chums who had both served in the RAF during the war. He admitted that he and Desmond 'enjoyed playing practical jokes'. And to demonstrate how easy it was to write fairytales about visitors from other worlds, Patrick produced his own spoof novel, Flying Saucer from Mars. Written under the pseudonym Cedric Allingham, it claimed the author had witnessed the landing of a UFO in Scotland in 1954 and that he was taken on board and whisked around the solar system.

This ripping yarn, told as it was in a less sophisticated time to a less sophisticated audience, caused a flutter of excitement in Fleet Street. Various journalists tried to track down the elusive Mr Allingham for more details of his wonderful celestial voyage. But alas, his publishers (Muller) told them he had died at a sanatorium in Switzerland and that was that. Patrick Moore was virtually unknown in 1954, when Flying Saucer from Mars was published, and he never publicly confessed to the hoax.  In 1986 when Magonia magazine published an exclusive story unmasking Moore as the real Cedric Allingham, he refused to comment and threatened to sue anyone who repeated the claim.

Ironically, by the '80s few people remembered Flying Saucer from Mars  and the only person who continued to refer to it in books and TV programmes was Moore himself. When I visited Patrick at his Sussex home Farthings in 2006 I asked him to sign my copy of the book. He just laughed and batted my questions away before dismissing flying saucers as 'a load of bunkum'. But he could never quite escape from the subject that had launched him on his career as Britain's best known astronomer.

In 1979 he co-presented an edition of The Sky at Night with his friend and former Goon star Michael Bentine which aimed to answer the vexed question ‘UFOs: fact or fantasy?’  In the programme Moore declared he was ‘the most complete sceptic about the idea that flying saucers are spaceships coming from other worlds’ whilst Bentine – who had a sighting of his own in 1958 – described himself as ‘a hopeful agnostic.’

During the programme Moore revealed that during the 1950s he ‘played a hoax’ by sending a phoney sighting to his local newspaper in Sussex: ‘…I said where it was and what it looked like and so on and this came out in the local paper and…over twenty people wrote in to confirm it.’ This demonstrated to his satisfaction that ‘people really see what they want to see'. While I disagreed with Patrick on a few subjects, on this point I had to concede he was 100% correct.

When he was not making fun out of the subject, Moore’s considered views on UFOs were similar to those of fellow astronomers and cosmologists, such as Sir Arthur C. Clarke and Sir Bernard Lovell. He had seen a range of unusual natural phenomena whilst observing the sky and believed there were adequate explanations for flying saucers without turning to alien visitors. In a 1977 article published in Radio Times, he wrote, with characteristic humour, a fitting last word on the subject:

‘There is nothing I would like better than to meet a Martian, a Venusian, a Saturnian or even a Sirian and my immediate instinct would be to invite him to join me in a Sky at Night programme.’