The Vehicle Assembly Building, or VAB, at NASA's Kennedy Space Center in Florida is undergoing renovations to accommodate future launch vehicles. A project of Ground Systems Development and Operations, or GSDO, space shuttle-era work platforms have been removed from the VAB's High Bay 3 and accommodations are being made to support a variety of future spacecraft, including NASA's Space Launch System (SLS) heavy-lift rocket. The changes are part of a centerwide modernization and refurbishment initiative in preparation for the next generation of human spaceflight.
One of the largest buildings in the world, the VAB was constructed in the mid-1960s to support stacking of the Apollo Saturn V rockets that took American astronauts to the moon. In the late 1970s, the facility was refurbished to accommodate the space shuttle. Following three decades of flight, the space shuttle was retired in 2011.
Plans now call for the VAB to be able to support multiple types of space vehicles, including the SLS, Orion spacecraft and commercial rockets. NASA is partnering with private industry on rockets and spacecraft to take astronauts to low-Earth orbit and the International Space Station. SLS will be an advanced heavy-lift launch vehicle providing a new capability for human exploration beyond Earth orbit.
“After more than 45 years of use, it was time to clear out and update the garage,” said Jose Lopez, VAB senior project manager in the Vehicle Integration and Launch Support Branch of GSDO. “What makes this project such a major undertaking is the size.”
The VAB is 526 feet tall, 716 feet long and 518 feet wide. It covers eight acres and encloses more than 129 million cubic feet of space. The building was constructed to withstand hurricanes and tropical storms with a foundation consisting of 30,000 cubic yards of concrete and 4,225 steel pilings driven 160 feet into bedrock.
The first step in the plan was to remove space shuttle-era work platforms, a project that presented numerous challenges.
"Imagine having to use a crane to safely lower to the ground a structure the size of a large home," Lopez said. “That provides perspective on what it was like to remove the old shuttle work platforms.”
There were eight box-like support structures surrounding the shuttles during stacking in the VAB. One box platform structure had been removed in 2009 in preparation for the launch of the Ares I-X test vehicle in October 2009. Each platform structure had work stands, connections for electricity, water, pneumatics and other commodities.
“For this undertaking, we selected an experienced construction contractor to help us remove and demolish the work platforms,” said Lopez.
Ivey's Construction Inc. of Merritt Island, Fla., began the task in early September. Working closely with NASA and other Kennedy contractors such as United Space Alliance and URS, as well as an on-call architectural and engineering firm BRPH, they helped ensure all systems in the VAB were disconnected from the platforms.
“There were several key factors to consider in order for platforms to be safely lowered to the floor, such as determining the center of gravity in each box platform section,” Lopez said. He noted that a few of the platforms were the size of a three-story building and weighed between 300,000 and 325,000 pounds.
“The effort to lower each platform took place over several hours to ensure full control of the suspended load. They were then set on stanchions on the VAB floor,” said Lopez. “Once checkout was complete, the platforms were moved outside on a transporter where Ivey's Construction crews demolished the structures so the debris could be safely hauled away.”
The effort also required a great deal of coordination to ensure the project was completed safely.
"There are several renovation projects going on in the VAB right now," Lopez said. "Tour guests from the Kennedy visitor complex were coming through, so we made sure to coordinate the work so it could be completed with safety being our number one priority."
The next major project will be to install a new fire suppression system.
“This will modernize the fire suppression water supply system and bring it up to modern codes,” he said.
Other major renovation includes code upgrades and safety improvements to the VAB. Some of the utilities and systems slated for replacement have been used since the VAB was completed in 1966. This initial work will be required to support any launch vehicle operated from Launch Complex 39 and will allow NASA to begin modernizing the facilities while vehicle specific requirements are being developed.
“Our plans for 2014 include awarding the constitution contract for the new access platforms, including related structures and systems required for the SLS,” Lopez said.
Some of the current work has included removal of over 150 miles of obsolete Apollo- and shuttle-era cabling. This will make room for installation of more efficient, state-of-the-art command, communication, control and power systems needed to perform testing and verification prior to the SLS and other rockets being rolled out to the launch pad.
- 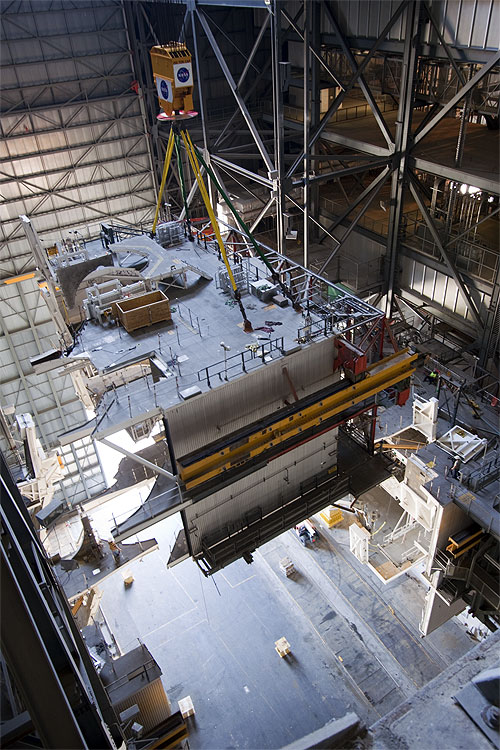 A large space shuttle-era work platform is being lowered by crane for removal from high bay 3 of the Vehicle Assembly Building. In order for platforms to be safely lowered to the floor, the center of gravity had to precisely determine for each of the seven sections. The work is part of a center-wide modernization and refurbishment initiative to accommodate NASA’s Space Launch System and a variety of other spacecraft instead of the whole building supporting one design. Photo credit: NASA/Jim Grossmann
- 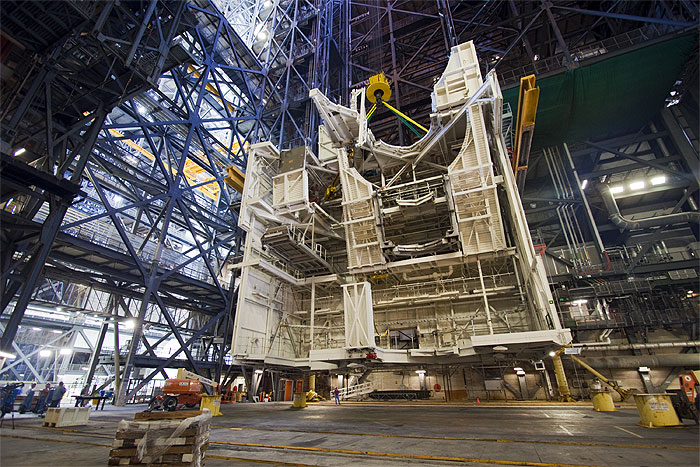 As part of NASA's Ground Systems Development and Operations Program, a space shuttle-era work platform is being moved to the floor high bay 3 of the VAB. GSDO is developing the ground systems, infrastructure and operational approaches to safely process, the next generation of rockets and spacecraft. Photo credit: NASA/Jim Grossmann
- 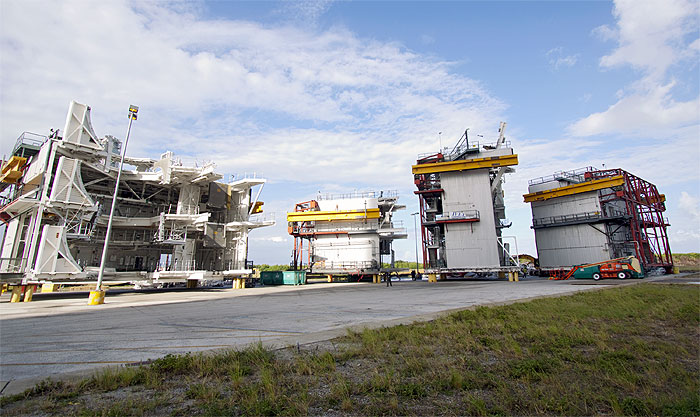 Several large space shuttle-era work platforms have been removed from the VAB and moved outside. Each platform will be demolished and the debris hauled away. Photo credit: NASA/Jim Grossmann
-
Quelle: NASA
4249 Views
Created with page4