SpaceX ignited all nine engines on their Falcon 9 launch vehicle on Saturday, a key test ahead of what remains an October 7 launch from Cape Canaveral. The Falcon 9 will be tasked with lofting the Dragon spacecraft on its first Commercial Resupply Services (CRS) mission to the International Space Station (ISS), which has been busily preparing for its arrival.

The hot fire – otherwise known as a static fire – allows for engineering evaluations into the health of the nine Merlin 1C engines that will send the Falcon 9 uphill during launch from Cape Canaveral’s Space Launch Complex 40 (SLC-40).

This test also allows for SpaceX controllers to practise their countdown procedures for the launch vehicle, following on from the Wet Dress Rehearsal (WDR) that was conducted back at the end of August.

As is standard for SpaceX F9 launches, the business end of the countdown begins with polling to allow for the loading of Falcon 9′s RP-1 propellant with liquid oxygen oxidiser two hours and thirty five minutes before T-0.

The strongback was lowered at around the L-100 minute point. Fuel and thrust vector control bleeding on the second stage was then performed at T-1 hour. At T-13 minutes, a final flight readiness poll was conducted, which was followed by the final hold point at T-11 minutes.

Pressurization of the propellant tanks followed, and while the WDR countdown concluded at T-5 seconds, the static fire test continued through to ignition for a short burst to validate the condition of the engine set.

Detanking operations soon followed the test, ahead of its lowering and rollback to the hanger, allowing for integration with the CRS-1 Dragon, which was not part of the stack for the WDR or static fire test. SpaceX engineers will evaluate the engine data gathered from the test over the coming days, feeding into their readiness review ahead of launch.

This opening CRS launch is scheduled for 8:34 p.m. EDT on October 7. However, some discussions (L2 Link) were continuing with the Eastern Range over the potential for the United Launch Alliance (ULA) Delta IV to move up from its October 4 launch date, in order to allow Falcon 9 some flexibility in the event of scrubs.

The reason for the launch date interest relates to the timing of Dragon concluding its mission, specifically the allowance for daylight recovery of the capsule after splashdown. SpaceX are understood to have inquired about launching as early as October 5.

With no changes to the launch schedule by this weekend, following discussions that were classed as ongoing as late as September 26, it is likely SpaceX will have to keep to its October 7 date, pending the successful launch of the Delta IV – carrying the Block 2F navigation satellite – which booked the range before SpaceX.

Meanwhile, in space, the Expedition 33 crew are making good progress in preparing the orbital outpost for Dragon’s arrival.

Items of interest specific to Dragon’s mission – via L2′s ISS rolling update area (L2 Link) – included the Commercial Orbital Transportation Services (COTS) Ultra High Frequency (UHF) Communication Unit, or CUCU, which rode in the middeck stowage locker on Atlantis during STS-129 late in 2009, before being handed over to ISS crewmembers ahead of the demonstration flights.

The CUCU provides a bi-directional, half-duplex communications link between Dragon and ISS using existing ISS UHF Space to Space Station Radio (SSSR) antennas, which provides a communication path between MCCX (SpaceX) and Dragon during proximity operations and a command security between ISS and Dragon.

“COTS UHF Communications Unit Software Load (CUCU) – A software update for the CUCU was installed by the crew and checked out by the ground controllers successfully,” noted the update. “SpaceX reported a successful CUCU checkout. This satisfies Launch Commit Criteria for SpaceX-1.”

Although ISS crewmembers capture and berth the Dragon by using the Space Station Remote Manipulator System (SSRMS – or Canadarm2) via controls in the Cupola Robotic Work Station(RWS), a second system is available, known as the LAB RWS.

Status updates note that the Controller Electronics Unit (CEU)’s Remote Power Controller Module (RPCM) tripped on the LAB RWS on September 22. This is a note of interest for Dragon, given the LAB RWS is required to be operational per the Launch Commit Criteria (LCC).

The complex set of notes eventually concluded that the RPCM RPC 2 has failed, leading to the proposal the Type 5 RPCM be R&R (Removed and Replaced) and remain on-orbit as a degraded spare until it can be returned for further investigation and refurbishment.

Thanks to in-built redundancy, the LAB RWS is still operation and as such is within LCC requirements for Dragon to conduct its mission. 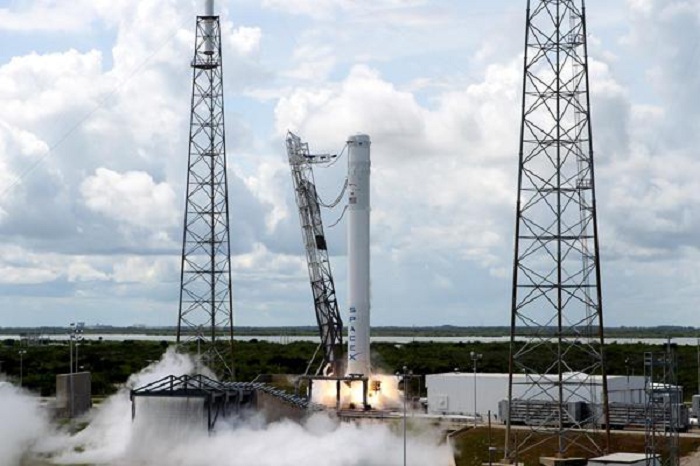 SpaceX's Falcon 9 rocket fires its engines on a Cape Canaveral launch pad during Saturday's successful static fire test, in preparation for an Oct. 7 launch to the International Space Station. 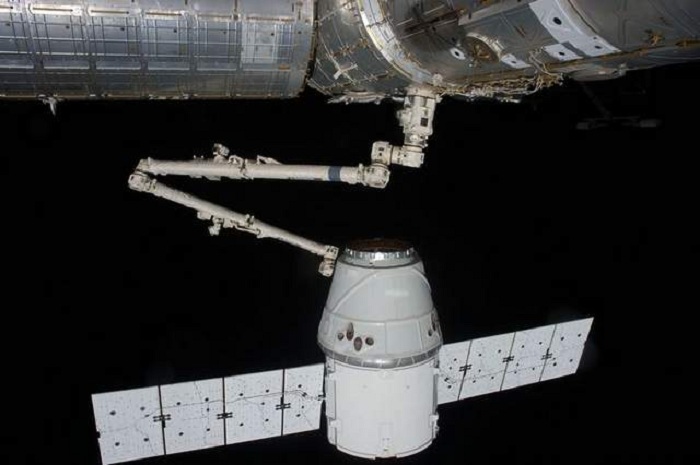 A week from Sunday, the Falcon 9 and a Dragon capsule loaded with about 1,000 pounds of cargo are scheduled to blast off to the space station. / NASA

A private rocket is set to launch toward the International Space Station next week, and viewers in Florida will have an awesome view.
The unmanned SpaceX Dragon capsule is due to lift off on the company's Falcon 9 rocket from Cape Canaveral Air Force Station Sunday (Oct. 7) at 8:35 p.m. EDT (0035 GMT Monday). The commercially built spacecraft will deliver food and supplies to the crew of the International Space Station in the first of 12 cargo missions SpaceX is contracted for by NASA.
The liftoff will be a night launch, one of the most impressive kinds of rocket launches to view, and should be visible across Florida's Space Coast and beyond. 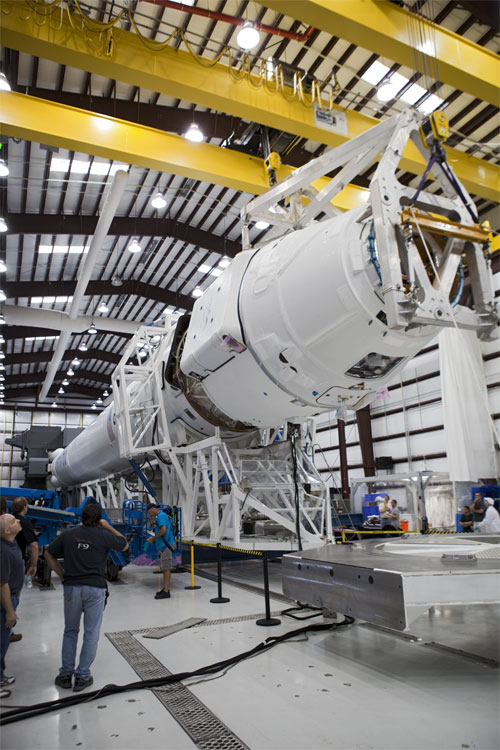 Technicians move a SpaceX Dragon capsule into place at the nose of the company's Falcon 9 rocket during preparations to launch the spacecraft on a cargo flight to the International Space Station. Credit: NASA
« Zum vorherigen Eintrag Zum nächsten Eintrag »
4105 Views
Created with page4