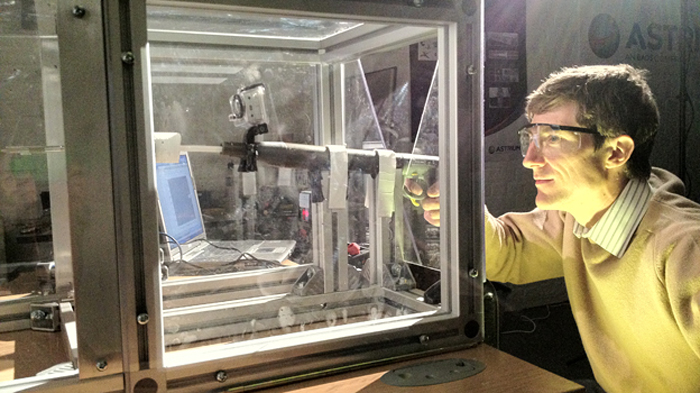 UK engineers are developing a system to harpoon rogue or redundant satellites and pull them out of the sky.
It is a response to the ever growing problem of orbital junk - old pieces of hardware that continue to circle the Earth and which now pose a collision threat to operational spacecraft.
The harpoon would be fired at the hapless satellite from close range.
A propulsion pack tethered to the projectile would then pull the junk downwards, to burn up in the atmosphere.
"Space has become a critical part of our infrastructure - from weather forecasting and Earth observation, to GPS and telecommunications," said the harpoon's designer, Dr Jaime Reed, from Astrium UK.
"Space junk poses a real threat to these vital services if we do nothing about it, and so it's very important we develop capture technologies to remove some of this material. Studies have shown that taking out just a few large items each year can help us get on top of the problem."
Dr Reed's proposal is for a barbed spear about 30cm in length. It would be mounted on a "chaser satellite" that would edge to within 100m of a junk object.
Pictures sent to the ground would then be used to assess the target, before the chaser was moved to within perhaps 20m to take a shot.
Once the harpoon is hooked through the skin of the rogue satellite or rocket stage, the chaser could either pull on a trailing polymer cord itself or deploy a separate thruster unit to do the job of dragging the aimless drifter towards Earth.
Explosive concern
The company, the largest space manufacturer in Europe, is also pursuing other ideas at its centres in France and Germany. These concepts involve nets and robotic grappling devices. All systems have their pros and cons.
Harpoons could deal well with a satellite that is tumbling, for example, but the approach has its critics because of the fear it could actually add to our problems in space.
"Historically, one of the great sources of debris has been the explosion of fuel tanks in spent rocket stages," explained Dr Reed.
"We obviously don't want to be the cause of that, so our harpoon has a crushable cylinder. It's like a piston, and as soon as the harpoon hits the satellite wall, it rapidly decelerates, ensuring we don't travel right through the spacecraft, puncturing the tanks."
More than 50 years of space activity have left a huge quantity of redundant hardware in orbit.
This includes not just whole satellites and the upper-stages of the rockets used to put them there, but also that debris from fuel tank explosions.
-

-
Today, it is said there are more than 22,000 objects actively being tracked.
These are just the big, easy-to-see items, however. Moving around unseen are an estimated 500,000 particles ranging in size between 1-10cm across, and perhaps tens of millions of other particles smaller than 1cm.
All of it is travelling at several kilometres per second - sufficient velocity for even the smallest fragment to do a lot of damage if it strikes an operational space mission.
Two events have really focussed the mind on this issue. The first was China's deliberate destruction of a decommissioned weather satellite using a missile in 2007. The second was the accidental collision in 2009 of the Cosmos 2251 and Iridium 33 satellites.
These two incidents produced hundreds of thousands of new fragments, negating all the mitigation gains that had been made over the previous decades.
Prof Richard Crowther is the UK Space Agency's chief engineer. He says there is a short window of opportunity to get on top of the issue before the number of collisions starts to increase and the problems associated with junk and debris begin to cascade. But he warns that any proposal for satellite removal requires international agreement because these systems could also be viewed as aggressive developments - as space weapons.
"If you've watched James Bond films over the years, you know that anything with a harpoon, with a laser, with a net in space has the potential to grab another spacecraft and destroy it," he told BBC News.
"So, we need to build reassurance within the space community and demonstrate that the systems being proposed are peaceful in their nature but also peaceful in the intent and the way in which they are going to be used."
The Astrium UK harpoon concept is being presented to the 63rd International Astronautical Congress in Naples on Wednesday.
- 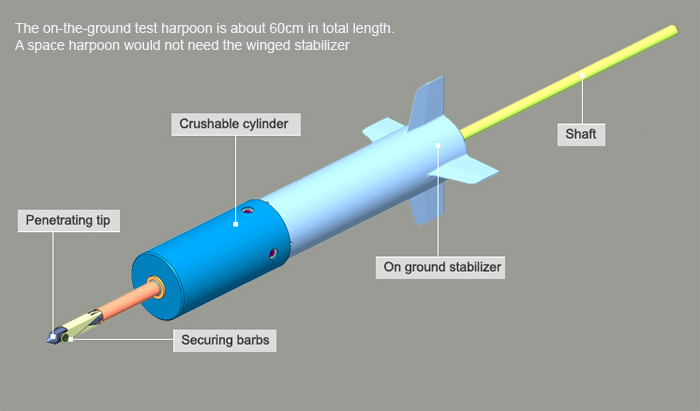