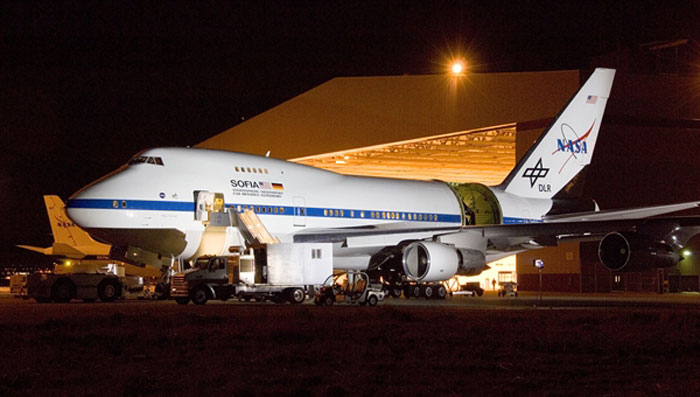 The Stratospheric Observatory for Infrared Astronomy, or SOFIA, a joint program between NASA and the German Aerospace Center DLR, is set tobegin its first full cycle of science flightsstarting in November 2012 andextending through December 2013.

SOFIA's Science Mission Operations Director Erick Young has announced the list of researchers who have been awarded time to study the universe with this unique infrared observatory. SOFIA is a heavily modified 747SP aircraft that carries a telescope with an effective diameter of 100 inches (2.5 meters) to altitudes above 39,000 feet (12 km),beyond the obscuring layer of water vapor in Earth's atmosphere.

In announcing the observing time awards, Young noted, "More than 1,000 hours of observing time were requested, five times the amount available, evidence of SOFIA's desirability to astronomers. The approved projects make good use of the observatory's capabilities to study objects ranging from Earth's solar system neighbors to galaxies hundreds of millions of light years away."

SOFIA's first airborne science observations were made in December 2010. During 2011, SOFIA accomplished 30 flights in the "Early Science" program, as well as a deployment to Germany from its base at NASA's Dryden Aircraft Operations Facility in Palmdale, Calif. The newly announced observing period, known as Cycle 1, includes 46 science flights grouped in four multi-week observing campaigns spread through a 13-month span.

The Cycle 1 science flights include approximately 330 research flight hours, about 200 hours of which have been awarded to guest investigators whose proposals to observe with SOFIA were evaluated by U.S. and German-chartered peer review panels.

In addition to the 46 science flights planned for Cycle 1, during the coming months SOFIA will undertake commissioning observations needed to make the first four of the observatory's seven first-generationscientific instruments ready for use by guest investigators.

These educators, including classroom teachers and science museum staff, were selected based on the quality of their plans to bring SOFIA training and flight experiences back to their classrooms and communities.

Six German Airborne Ambassador educators also are expected to participate in SOFIA flights during Cycle 1. "Last year, SOFIA demonstrated that it is well on its way to being a first-class asset to the world scientific community. Since then, the observatory staff has been working hard to complete integrated systems testing, fine-tuning of observatory performance and planning for international operations," said Pete Zell, NASA SOFIA science project manager.

"This SOFIA Cycle 1 announcement marks an important step in our progress. Infrared studies from these observations will enhance our knowledge of the life cycles of stars, how planets form, the chemistry of the interstellar medium and much more."

SOFIA is a joint project of NASA and the German Aerospace Center (DLR) based and managed at NASA's Dryden Aircraft Operations Facility in Palmdale, Calif. NASA's Ames Research Center at Moffett Field, Calif., manages the SOFIA science and mission operations in cooperation with the Universities Space Research Association (USRA) headquartered in Columbia, Md., and the German SOFIA Institute (DSI) at theUniversity of Stuttgart.