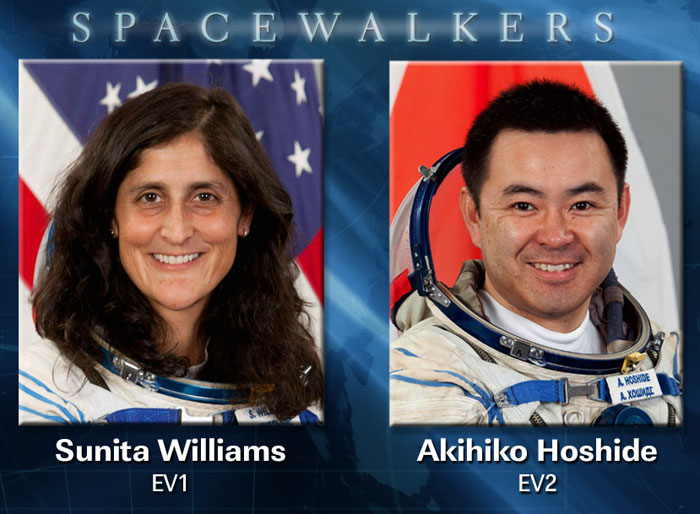 The Expedition 32 crew finalized preparations Tuesday for a second spacewalk in less than a week in the wake of an unsuccessful attempt to install a replacement power-switching unit on the International Space Station’s truss Thursday.
Flight Engineers Suni Williams and Aki Hoshide, who spent the weekend studying revised procedures and fabricating an array of new tools, finished configuring the Quest airlock for a spacewalk beginning at 7:15 a.m. EDT Wednesday to complete the installation of a spare Main Bus Switching Unit (MBSU). The MBSU is a boxy, 220-pound component that relays power from the station's solar arrays to its systems. A marathon 8-hour, 17-minute spacewalk Thursday -- the third longest in history -- ended with the spacewalkers unable to attach the switching unit into its housing on the truss.
Engineering teams at the Johnson Space Center in Houston have worked around the clock since Thursday to troubleshoot the problem that prevented the spare MBSU from being installed. The most probable cause is likely a combination of a slight misalignment in the positioning of the spare unit for its installation prior to bolting and possible damage to the threads of the receptacle posts on the S-zero truss to which the MBSU must be bolted in place.
Wednesday’s spacewalk is scheduled to last 6.5 hours. If by the 4-hour mark the spacewalkers are still unable to install the MBSU, they will begin the process of cleaning it up and bringing it back inside the Quest airlock for further analysis and troubleshooting within the pressurized, shirt-sleeve environment of the station.
NASA Television coverage of the spacewalk begins at 6 a.m.
-