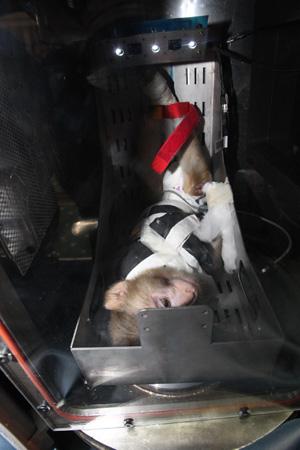 Foto: ISA - A successful return for a primate payload would be a feather in Iran's cap 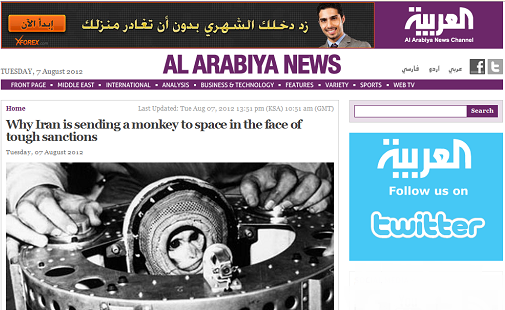 The rhesus monkey is undergoing special training for its upcoming mission aboard a Kavoshgar-5 rocket, said director of the Iranian Space Agency, Hamid Fazeli last week at a press conference. The plan involves keeping the monkey alive in a specially-designed capsule.

“At the moment, the launch of a spaceship which will carry a monkey is on the agenda, and I hope this will be done after the holy month of Ramadan,” Fazeli said.

Jokes about “monkeying around” aside, if the endeavor is successful, with the rhesus returned safely to Earth, it would be a great boost to its space program.

Brian Weeden, technical advisor at the Secure World Foundation, which promotes sustainable use of outer space, said the mission would not orbit Earth like a satellite. The monkey would follow a flight path similar to a ballistic missile, being launched into sub-orbit and then come back into the atmosphere, in a flight lasting around 20 minutes, he said.

Weeden told Al Arabiya English it is much more difficult to place something into orbit, but a successful monkey mission would still be a step forward for the Iranian space program. Iran is a long way from being able to send humans into space, he said, but the upcoming launch is a necessary step on the path to developing a human space flight program.

The Islamic Republic announced in February last year that it would conduct the monkey mission as a prelude to launching a man into space by 2020 and landing an astronaut on the moon by 2025. However, prior attempt to launch a craft carrying a monkey failed last October, stalling those space ambitions.

Iran, which launched its first satellite into orbit in 2009, previously sent a rat, turtles and worms into space aboard a Kavoshgar-3 rocket in 2010.

The country is also reported to be putting the finishing touches on a secret new facility to launch satellites -- a step some analysts fear will move Iran closer to developing intercontinental ballistic missiles.

It is widely believed that the new complex, to be named after Islamic Republic founder Ayatollah Ruhollah Khomeini, is being constructed in the southeastern province of Sistan and Baluchistan, near Pakistan. Iran has repeatedly denied any military intentions behind its space program, saying it is motivated instead with reasons such as earthquake monitoring and imaging and development of telecommunications.

But as seen with Iran’s efforts to develop nuclear technology, other countries can have serious doubts about its motives.

Iran’s recent announcement of its monkey plans comes amid new economic sanctions against its oil export sector and a pair of Chinese and Iraqi banks accused of doing business with Tehran.

The United States and the European Union have already imposed several rounds of sanctions targeting Iranian oil sales, as part of a drive to increase international pressure on Tehran to halt its nuclear program ambitions.

As the West argues Iran is building a nuclear weapons capacity, Tehran insists it plans to carry out uranium enrichment for purely peaceful purposes.

In the meantime, prices of meat, rice, bread and other food staples have spiraled in Iran, as its currency the rial has lost a third of its value against the U.S. dollar on the open market since November. The International Monetary Fund also recently forecast unemployment in the country to rise over the next two years.

But while other governments try to curb its nuclear program, the Secure World Foundation’s Weeden said the seriousness that Iran has displayed with its space program by launching animals out of the atmosphere has stopped other nations from trying to end its rocket-launching efforts.

As a counter-point, he talks about alarm over North Korea’s past rocket launches. In that case, there was a general belief Pyongyang’s was using a space program in attempt to legitimize the development of its ballistic missile technology.

The 1967 Outer Space Treaty allows all countries to use space in a peaceful manner and, Weeden said, and so far Tehran has been doing that with its space program.

Many ask what drives Tehran to choose to spend millions of dollars on sending a monkey into space amid this financial mayhem.

Weeden said the motivation is most likely prestige. It is much easier for the public to identify with a living creature sent into space than a robot, and if it is brought down safely it will be much easier to publicize.

He also believes the government is trying to demonstrate technological progress and power to the Iranians under sanctions, whilst showing the international community a space program is solely for peaceful purposes. That would undermine any political or legal attempts to hinder the program, and allow for the regime to also improve its ballistic missile capabilities, Weeden concluded.

Iran analyst and head of the London-based Center for Arab and Iranian Studies, Dr. Alireza Nourizadeh, believes Tehran has more sinister motives. According to him, millions of Iranians are dreaming of being able to afford regular food items, but are instead being forced to watch “millions of dollars being wasted just to show [Supreme Leader Ayatollah] Khamenei is conquering the sky.”

Nourizadeh told Al Arabiya English that the space program is nothing but a distraction to continue developing ballistic missiles. He believed Iran would use two identical monkeys for its launch -- one sent to space ends up dead, with the other one shown to the public as “proof” of a successful mission.

“All this game is to raise national pride, as the Soviet Union did in the 1960s and 70s; they think by this fake space program, they will show how advanced they are,” said Nourizadeh.

“But the USSR collapsed even with the most advanced missiles and space program when the social and economic system collapsed. It is the same in Iran even if they send Khamenei to space.”