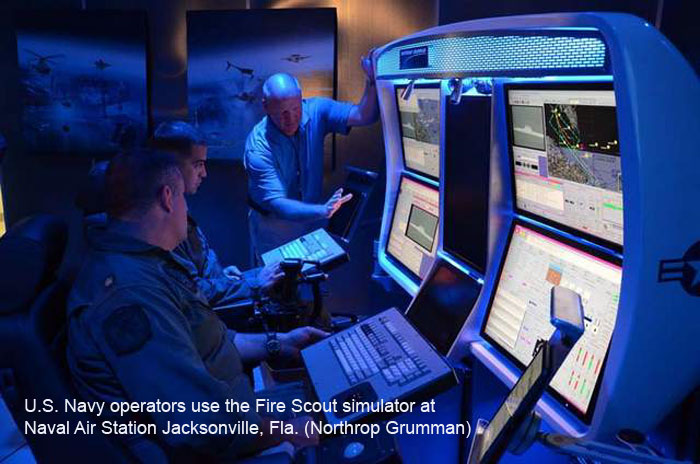 It is difficult to train a UAV crew when its simulator is several states away. However, the U.S. Navy has opened a training center for MQ-8B Fire Scout operators and maintainers where they can conduct home station training at one location. The facility uses existing space and equipment, so costs were minimal, according to Fire Scout manufacturer Northrop Grumman.
The training center at Naval Air Station Jacksonville, Fla., is housed in an existing building used for H-60 helicopter training, Northrop Grumman spokesman Warren Comer said. During the Fire Scout’s development, its flight simulator was built at Naval Air Station Patuxent River, Md. The problem was that Fire Scout crews didn’t use it often on account of being some 700 miles away. As a result, training was conducted on an ad hoc basis in the H-60 building.
The Navy’s solution was to truck the simulator down to Jacksonville and carve simulator and classroom space out of the H-60 facility. The simulator can train two two-man Fire Scout crews simultaneously, each consisting of an operator and payload specialist.
The new training facility offers several advantages, according to Capt. Doug Ten Hoopen, commander of Helicopter Maritime Strike Wing Atlantic, which operates the Fire Scout along with manned helicopters. The Navy will be spared travel costs between HSMWL’s Mayport, Fla., base and Pax River, while easy access to simulators also means that pilots can conduct proficiency training as needed without having to travel to Maryland.
The Fire Scout is a 24-foot-long, 2,100-pound unmanned helicopter that is controlled by operators aboard Navy ships. Teamed with H-60 helicopters, the UAV has been used for ISR missions and can be equipped with radar, mine detection and other payloads. Northrop Grumman has produced 31 Fire Scouts for the Navy under a limited-production contract.
Quelle: US-NAVY/Northrop-Grumman
« Zum vorherigen Eintrag Zum nächsten Eintrag »
4398 Views
Created with page4