NAVAL AIR STATION PATUXENT RIVER, Maryland — If you saw it in person, you’d probably think it was a UFO, too.
That’s what happened when the Navy trucked its batwing-shaped drone of the future from California to its new testing bed here in Maryland. Across the country, 911 switchboards lit up with reports that mysterious trucks were hauling a spaceship. In truth, it was a demonstration model for something the Navy desperately wants: to launch an armed, spying, stealthy drone from an aircraft carrier, one of the hardest maneuvers in aviation, conducted with the click of a mouse. But up close, you can see why people freaked out.
Not many people have seen the X-47B, as the Navy calls it, up close: its Northrop Grumman manufacturers and its remote Navy test pilots, mostly. Until Tuesday, when the Navy program executive office in charge of developing what will be known as the UCLASS — for Unmanned Carrier Launched Airborne Surveillance and Strike System — let reporters see the X-47B in the metallic flesh.
First impression: It’s a lot bigger than the photos and music videos have made it out to be. Its 62.1 feet of bat-shaped wingspan look even larger in person. When it stands on its landing gear, you get the sense that a human being could actually crawl into the X-47B — they’d need a ladder — even though that would defeat the purpose. After all, the X-47B is designed to be one of the most autonomous drones the U.S. military has.
- 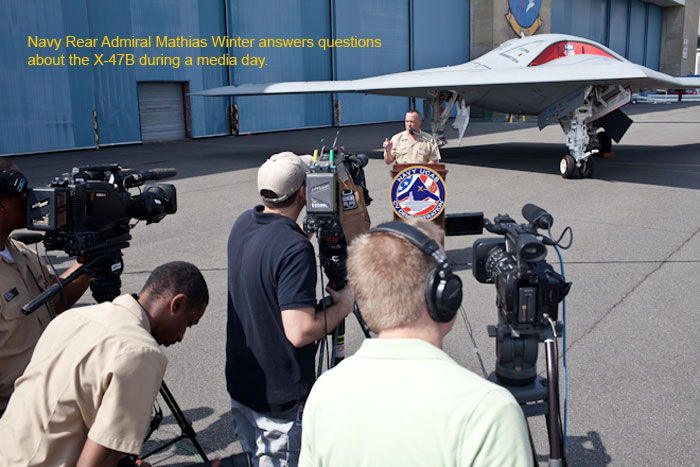 -
The idea behind UCLASS — of which the X-47B is merely the demonstration model — involves doing away with the joysticks and computer banks that most remote operators use to control their drones. Instead, Northrop’s proprietary software lets drone pilots program where they want the drone to fly. Then they can go get a sandwich. “It’s smart enough for you to put really interesting contingencies” in the X-47B’s way, says Capt. Jaime Engdahl, the Navy’s program manager for its flying drones. “It has the smarts to react to that condition.”
The Navy doesn’t really want to elaborate, beyond saying that “precision GPS” helps the drone understand where its aircraft carrier mothership is. The Navy is quick to remind reporters, however, that the X-47B is just a demonstrator, unarmed and carrying no sensors yet. It’s at Pax River, home to catapults and trapping wires that simulate what’s necessary for an aircraft launch, to test the proposition that the Navy really can launch a drone from a carrier and bring it safely back. The drone took its first flight from Pax River on Sunday, a 35-minute flight over the Chesapeake Bay at 7,500 feet and a 180-knot clip.
Next year, the Navy plans to actually launch the X-47B from Pax River to the deck of an aircraft carrier — with the aforementioned mouse click. The plan is to bring UCLASS into the Navy’s air fleet by 2019 (the date recently slipped a year).
That said, not even a drone as autonomous as the X-47B is without human companionship. A Northrop test pilot named Gerrit Everson can prove it: on his forearm is a white box called the Control Display Unit. Packed with six buttons and cabled to a battery pack strapped to the small of Everson’s back, it’s kind of like if Nintendo created a Power Glove for flight-deck operations. The control unit can power the drone up once it’s latched to a carrier catapult and take control of it once it lands and needs to be moved elsewhere on the carrier. Everson grips a handle and flicks his wrist; if the X-47 was powered up, its nose would along with his wrist.
Another thing the Navy’s got to test is just how an aircraft carrier’s crew works with a robotic plane. There’s little margin for error in flight deck operations, and so far, sailors only know how to interact with human pilots. At Pax, a commander named Jeff Dodge explains how the Navy has “digitized an aircraft carrier” so the X-47B can better understand all the other stuff that occurs on the flight deck, in order to integrate it with manned flights. There’s even a dongle that Dodge calls a “Pickle Stick”: something that can send wave off the X-47B if the robot looks like it’s not going to land on the carrier at the right angle.
Which is an indicator that a lot can go wrong with an autonomous drone above the waves. The Navy says it’s not concerned about them — yet. Engdahl concedes that for the time being, the Navy isn’t testing how the X-47B protects against spoofing, which may have been how the Iranians brought down the CIA’s RQ-170 Sentinel drone last year. And since the X-47B isn’t strapped with any weapons or cameras — yet — the Navy hasn’t figured out exactly how the human being who will decide when to use its deadly force fits into the drone’s autonomous operations. “We’re in the crawl-walk-run stage of autonomous systems,” Engdahl says. But underneath the bulbous, beak-like nose cone — what you might call the jowls of the drone, there’s a second set of doors behind the landing gear. That’s the payload bay, where the drone can carry two 2,000-pound bombs.
The rest of the drone is weirder than meets the eye. Calling it a mini-stealth bomber, a common description, doesn’t really do it justice. It’s got something of a pot belly and a hunched back. Its wings don’t taper flat, they bulge out like a flexed bicep and out a second time near the wingtips. In place of a cockpit is a red slit — an air intake — that makes the machine look like a Cylon Raider from Battlestar: Galactica. It may be on an aircraft carrier before the decade ends, but it’s not crazy to think the X-47B seems otherworldly.
- 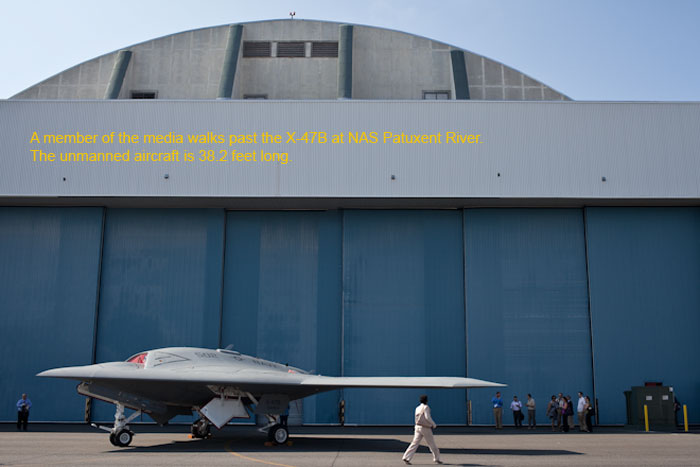 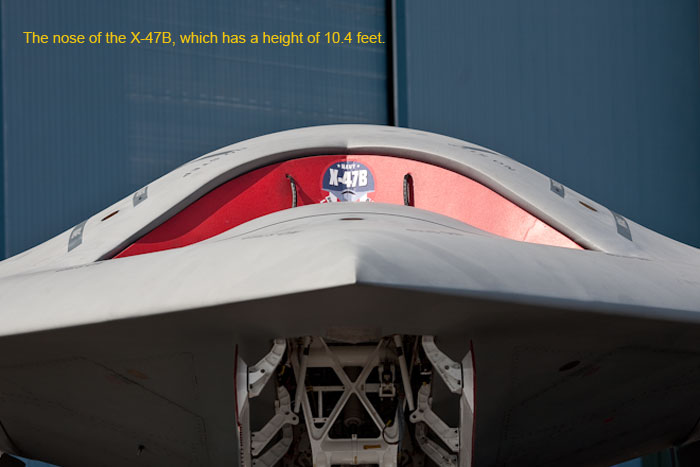 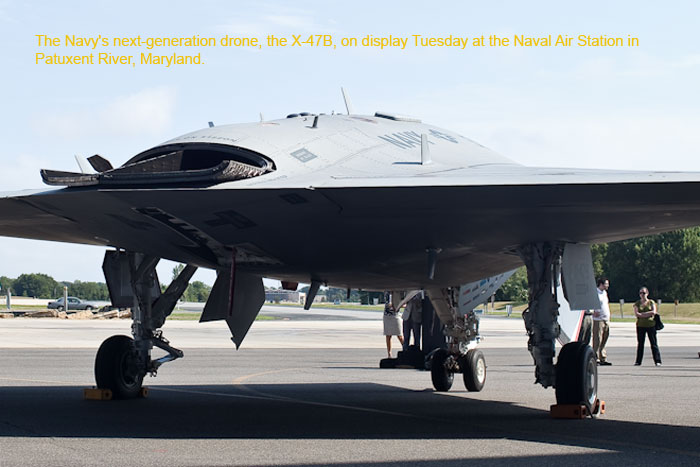 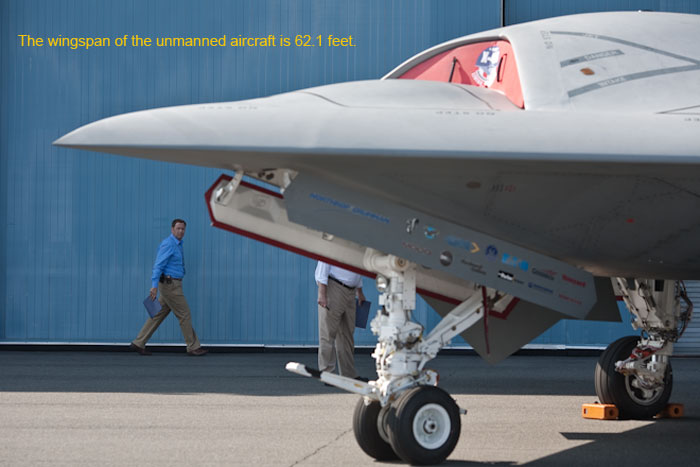 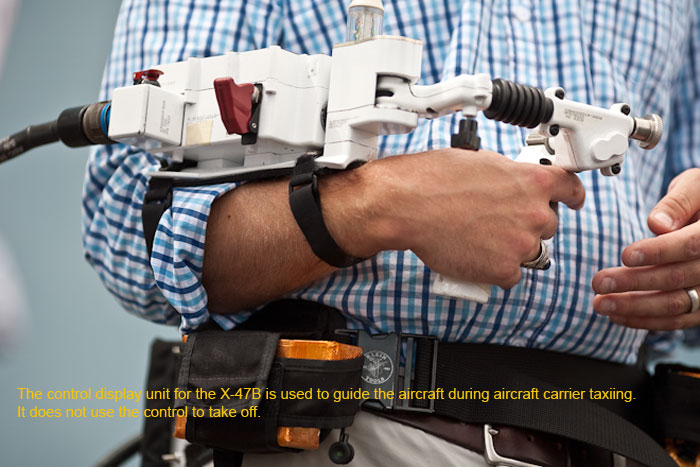 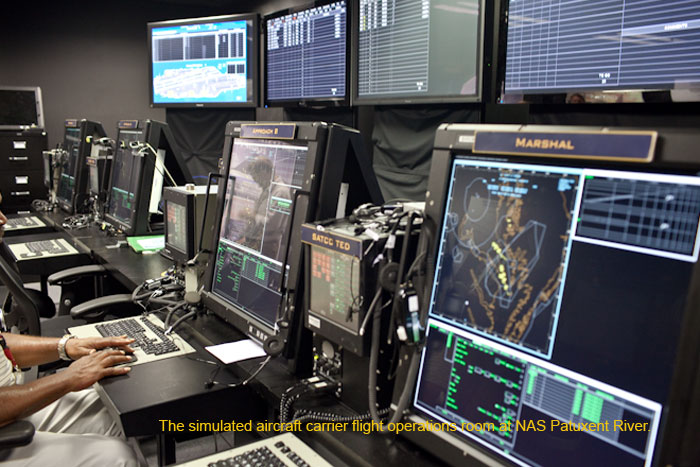