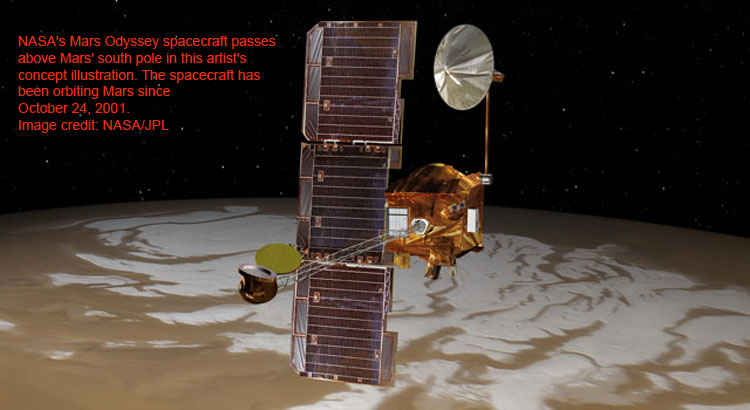 Mission Status Report
PASADENA, Calif. -- NASA's Mars Odyssey orbiter has resumed its science observations and its role as a Mars rover's relay, thanks to a spare part that had been waiting 11 years to be put to use.
Odyssey's flight team returned the orbiter to full service this week after a careful two-week sequence of activities to recover from a fault that put Odyssey into reduced-activity "safe" mode. Odyssey switched to safe mode when one of the three primary reaction wheels used for attitude control stuck for a few minutes on June 8, Universal Time (June 7, Pacific Time).
Engineers assessed the sticking wheel as unreliable and switched the spacecraft from that one to a spare that had been unused since before the mission's April 7, 2001, launch.
"Odyssey is now back in full, nominal operation mode using the replacement wheel," said Steve Sanders, lead engineer for the Odyssey team at Lockheed Martin Space Systems, Denver. Lockheed Martin collaborates with NASA's Jet Propulsion Laboratory, Pasadena, Calif., in operation of Odyssey, which has worked at Mars longer than any other Mars mission in history.
Observations of Mars resumed June 25 with Odyssey's Thermal Emission Imaging System and its Gamma Ray Spectrometer. As a relay, Odyssey received data from NASA's Mars Exploration Rover Opportunity today, June 27, and transmitted the data to Earth. Other priority activities include preparing Odyssey to serve as a communications relay for NASA Mars Science Laboratory mission.
Odyssey uses a set of three reaction wheels to control its attitude, or which way it is facing relative to the sun, Earth or Mars. Increasing the rotation rate of a reaction wheel causes the spacecraft itself to rotate in the opposite direction. The configuration in use from launch until this month combined the effects of three wheels at right angles to each other to provide control in all directions. The replacement wheel is skewed at angles to all three others so that it can be used as a substitute for any one of them. Odyssey can also use thrusters for attitude control, though that method draws on the limited supply of propellant rather than on electricity from the spacecraft's solar array.
Quelle:NASA
« Zum vorherigen Eintrag Zum nächsten Eintrag »
4598 Views
Created with page4