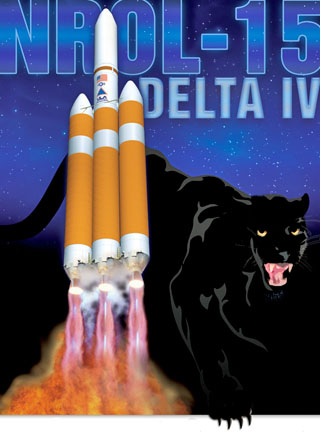 About a month before its scheduled launch, a classified satellite payload already encapsulated in the lengthy nose cone is hoisted into the mobile service gantry and placed atop the United Launch Alliance Delta 4-Heavy rocket at Cape Canaveral's Complex 37.
The bullet-shaped shroud protects the satellite during ascent through Earth's atmosphere and then gets jettisoned to uncover the craft after the threshold the space is reached.
The payload is known only as NROL-15 for the National Reconnaissance Office.
See our Mission Status Center for the latest news on the launch.
Photo credit: United Launch Alliance 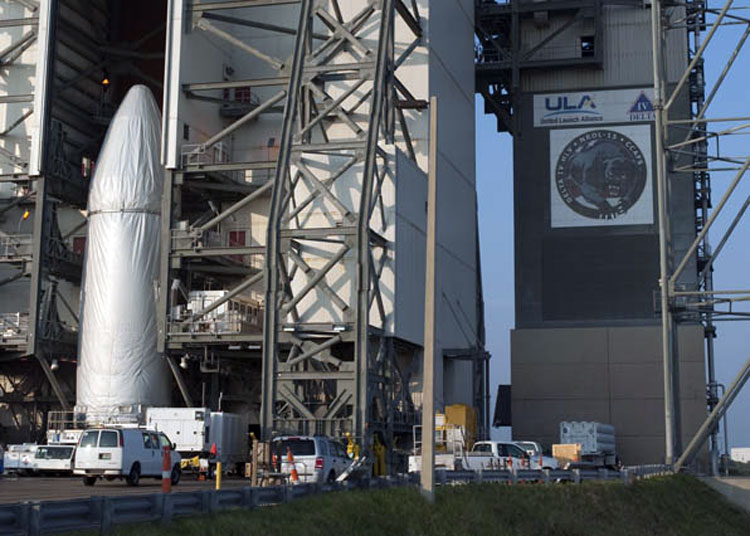 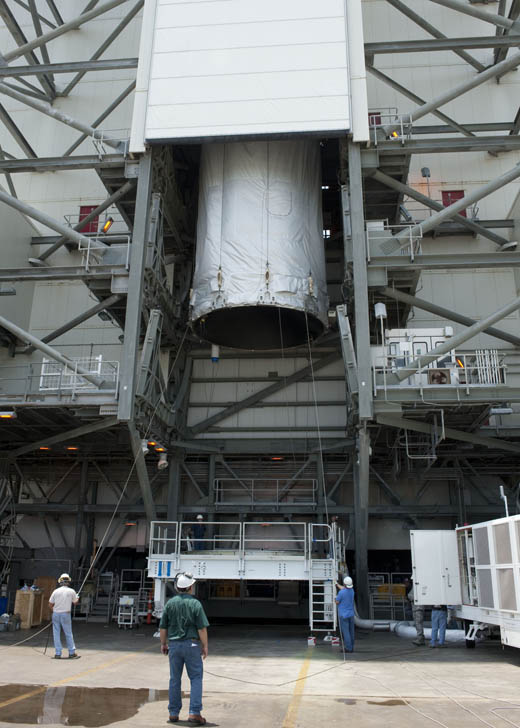 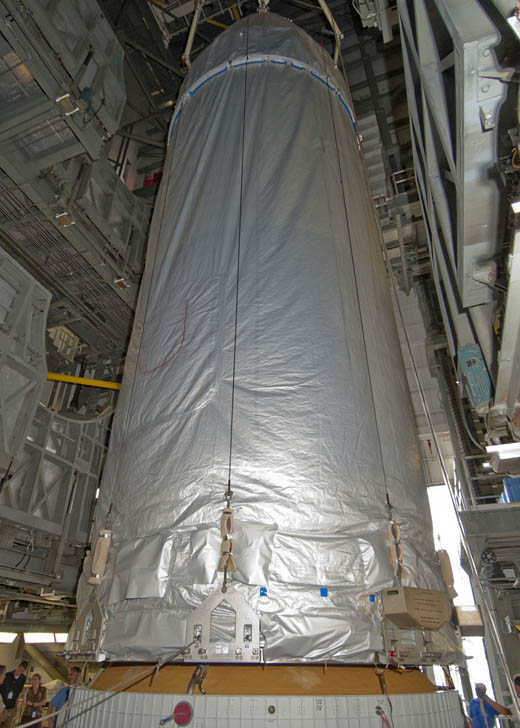 Mission-Status:
MONDAY, JUNE 25, 2012
Thursday's launch of the Delta 4-Heavy rocket carrying a clandestine payload from Cape Canaveral Air Force Station is targeted to occur at 6:16 a.m. EDT (1016 GMT). The duration of the morning's launch window remains a secret.
Officials previously announced that liftoff would happen some time between 5:30 and 10:30 a.m. EDT (0930-1430 GMT).
Update 26.06.2012:
The forecast doesn’t look great for Thursday morning’s planned launch of a classified satellite atop a Delta IV Heavy rocket.
There’s only a 30 percent chance of conditions good enough for a planned 6:16 a.m. liftoff from Launch Complex 37 at Cape Canaveral Air Force Station, according to the Air Force’s 45th Weather Squadron.
Heavy clouds and strong ground winds could pose problems during a launch planning period that extends to 10:30 a.m.
The forecast improves slightly on Friday, to a 40 percent chance of favorable weather.
The National Reconnaissance Office mission would be the sixth by United Launch Alliance’s Delta IV Heavy, which features three first-stage boosters strapped together.
It would be the first launch using Pratt and Whitney Rocketdyne’s upgraded RS-68A main engines, the most powerful hydrogen-fueled liquid rocket engines ever built.
The launch is planned just eight days after an Atlas V lifted another NRO satellite to orbit from the Cape.
ULA plans to begin a launch broadcast at 5:56 a.m.
Update 27.06.2012
Debby has forced United Launch Alliance officials to delay Thursday’s scheduled launch of a Delta IV rocket.
The rocket is carrying a national security payload for the National Reconnaissance Office.
The launch is now scheduled for Friday, June 29 at 6:13 a.m. Count on News 13 to bring you LIVE coverage of the launch.
Update: 28.06.2012
Launch forecasts currently call for a 70% chance of favorable conditions expected at T-0 Friday morning, with the primary concern being a chance of violating the cumulous and thick clouds rule over the launch site.  Forecasts call for much of the same for a second launch attempt June 30, if needed.  Having passed a Launch Readiness Review earlier this week, teams will begin final operations to ready the rocket for launch Thursday evening beginning with moving the Mobile Service Tower away from the Delta-IV Heavy.  Launch was scheduled for Thursday morning, but tropical storm Debby has been drenching the state with several inches of rain over the last several days and forced teams to delay at least 24 hours.  The storm has now picked up speed as it moves offshore and is expected to clear the area this evening.  Due to the secretive nature of the mission there are no official details available concerning the payload or the mission itself.  Launch coverage will only be provided through the first few minutes of flight, as is standard for all NRO launches.
« Zum vorherigen Eintrag Zum nächsten Eintrag »
4222 Views
Created with page4