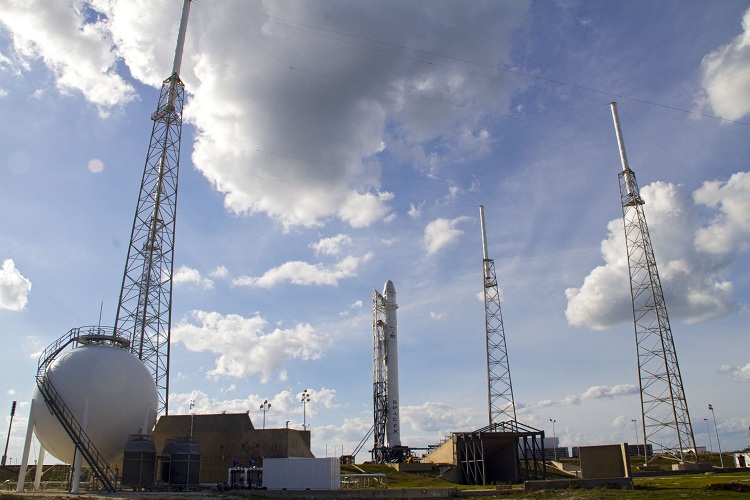 Space Exploration Technologies, or SpaceX, of Hawthorne, Calif., on Friday targeted May 19 for the launch of its upcoming demonstration mission to the International Space Station.

This follows a launch dress rehearsal April 30 by the SpaceX launch team that concluded with a brief engine firing to verify the company's Falcon 9 rocket is ready to launch. The practice countdown also tested some of the systems on the Dragon spacecraft that will fly to the space station.

"Woohoo, rocket hold down firing completed and all looks good!" reported Elon Musk on his Twitter account. Musk is the owner and chief designer for SpaceX, or Space Exploration Technologies. The company's engineers are reviewing data from the test, SpaceX reported.

SpaceX is preparing for its second Commercial Orbital Transportation Services, or COTS, demonstration to show that private industry can build and launch spacecraft on regular cargo resupply missions to the station. This rocket and spacecraft will not carry people, but will have about 1,200 pounds of supplies onboard for the six astronauts and cosmonauts working on the space station.

The flight is an ambitious test for the company and the agency as they work through a new spacecraft, rocket and rework the fundamental approach to spaceflight. Even if problems develop on this particular mission, NASA officials say the agency will keep the effort going and work to resolve any issues.

Mission plans call for an extensive set of tests in space requiring the Dragon spacecraft to show that it can move precisely in orbit and approach the space station carefully. Only after these tests are successful will the spacecraft be allowed to approach the orbiting laboratory close enough to be grappled and berthed by the station's robotic arm.

Originally, this mission was to include only the launch and tests in orbit rather than physically connecting to the station. If the Dragon is unable to complete its tests successfully, NASA expects to work with SpaceX to resolve whatever issues develop and accomplish a rendezvous and docking on the third demonstration mission. That would not set back any of NASA's plans for future cargo missions to the station because it would be following the parameters the agency originally established for the COTS contract with SpaceX

As SpaceX continued its launch preparations at Space Launch Complex 40 at Cape Canaveral Air Force Station in Florida, the static test firing gave the launch team a good indication of its readiness. The ignition for the static fire test took place at 4:15 p.m., about 45 minutes after a last-minute technical issue scrubbed the first attempt. After troubleshooting, the launch team recycled the countdown. While good practice for a launch scenario, the issue would have scrubbed the day's opportunity on a real launch day because the rocket has an instantaneous window in order to catch the space station.

The Falcon 9 is powered by nine Merlin engines, and SpaceX reports that all nine were lit and run at full power for two seconds during the test The rocket's second stage is powered by a Merlin vacuum engine, which runs on refined kerosene and liquid oxygen, the same fuel and oxygen combination that was used on NASA’s Saturn V moon rocket first stage.

The SpaceX mission will be a landmark for the privately run company that used the same rocket/spacecraft combination in December 2010, to become the first private organization to launch and recover a spacecraft from Earth orbit.

This time, SpaceX’s Dragon capsule is scheduled to operate in space for about three weeks, including an unprecedented rendezvous and berthing to the space station. If successful, the mission will give the company another place in the record books.

NASA wants private industry to deliver cargo to the orbiting laboratory on a regular basis. NASA awarded COTS space act agreements to SpaceX and Orbital Sciences Corp. of Dulles, Va., to help them develop their rockets and spacecraft.

NASA engineers and flight controllers are closely working with SpaceX ahead of this flight to coordinate the intricate approach, rendezvous and birthing plans needed for this historic demonstration mission to the International Space Station.