NASA’s stalwart Mars helicopter is back and better than ever

Cumulatively, Ingenuity has now flown more than 3 km across the surface of Mars. 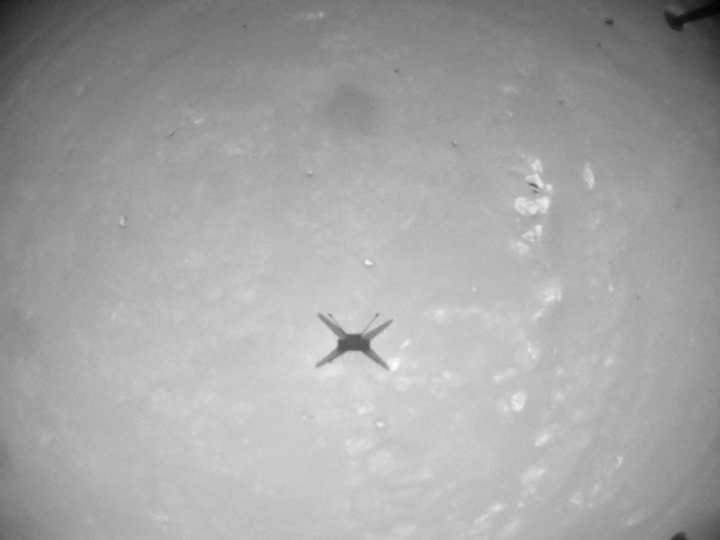 Nearly seven months have passed since NASA's Ingenuity helicopter made its first groundbreaking flight on Mars.

Since that initial tentative hovering above the surface of Mars, Ingenuity has flown a progression of longer, more significant, and scientifically important flights. It has flown as far as 625 meters in a single flight, as high as 12 meters, and for a duration of as long as 169.5 seconds.

But in September the small flying vehicle faced a growing threat from a thinning atmosphere due to seasonal variation. NASA's Perseverance mission had landed in Jezero Crater, in the northern hemisphere of Mars, during the planet's late winter in February. But since then summer has come on, and the density of Mars' atmosphere has fallen from about 1.5 percent that of Earth's atmosphere to 1.0 percent. For a helicopter already pushing the limits of flying in a thin atmosphere, this represented a significant decline.

NASA engineers devised a plan to compensate by increasing the rotation rate of Ingenuity's blades from a little more than 2,500 rpm to about 2,800 rpm. An initial flight test at a higher rotation rate, in September, raised concerns after Ingenuity failed to take off. Was this the end for a helicopter that had already survived far longer than its design life?

No, it was not. After engineers diagnosed a problem with the helicopter's small flight control motors and implemented a solution, Ingenuity was ready to try again. On October 24, Ingenuity executed a short flight at 2,700 rpm, rising about 5 meters and moving a horizontal distance of about 2 meters. This successful test gave engineers more confidence in trying a longer flight in Mars' thinner atmosphere at a higher rpm.

That happened this week, when Ingenuity completed its 15th overall flight on Mars, flying 128.8 seconds and about 400 meters across the surface of Mars. This flight proves that Ingenuity is capable of flying on Mars even in the thinnest atmosphere and sets the stage for future low-density-atmosphere scouting missions to check out scientifically interesting areas.

Cumulatively, Ingenuity has now flown more than 3 km across the surface of Mars—more than five times farther than NASA had hoped to demonstrate with this technology. It's safe to say that flying on other worlds, with atmospheres, will be more than just a passing fad for future exploratory missions. Rather, it likely represents the future.
Quelle: arsTechnica
----
Update: 21.11.2021
.

Here’s the best video yet of Ingenuity flying across Mars

The mission's planners don't know how long the plucky vehicle will last. 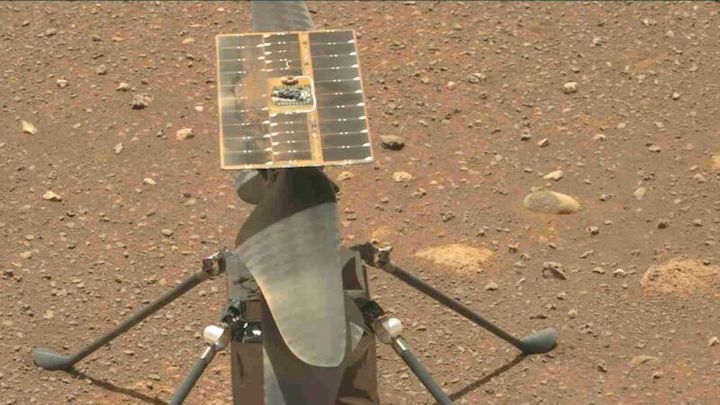 A close-up view of Ingenuity on Mars, as seen by the Perseverance rover, in April.

Back in early September the small Ingenuity helicopter that NASA sent to Mars along with the Perseverancerover made its 13th flight on the red planet.

It was a technically demanding flight, traversing nearly 210 meters across rocky terrain largely impassable to the rover. Ingenuity reached a maximum altitude of about 8 meters before landing safely again. But what makes this flight truly special is that Perseverance was able to track the helicopter's takeoff and flight.

Imagery from this flight was only recently relayed back to Earth, and the Mars rover team at NASA's Jet Propulsion Laboratory has compiled the data into a video showing nearly the entire flight. This footage offers by far the best view we've ever seen of Ingenuity flying across the surface of Mars.

At the time of the flight, Ingenuity was about 300 meters away from the rover. But fortunately Perseverancehas the most advanced pair of eyes ever sent to Mars. Located on top of the rover, the "Mastcam Z" instrument—the "Z" stands for zoom—has two cameras designed to provide the clearest possible imagery from Mars and make 3D imagery possible.

The un-zoomed footage shows this contrast nicely, with Ingenuity visible only as a tiny speck in the distance.

After this flight in September Ingenuity has taken things a little bit easier. It stood down for about six weeks during the Mars solar conjunction, when the red planet and Earth are on opposite sides of the Sun, making communications difficult. Ingenuity's engineers also had to deal with a problem affecting the helicopter's small flight control motors, and then a thinning atmosphere during the Mars winter.

To compensate for a thinner atmosphere, Ingenuity had to prove it could spin its blades faster than they were designed for. After a short test flight in late October, Ingenuity made a triumphant return on November 6 with a 407-meter flight across a wintry Martian surface, ascending to an altitude of 12 meters. Its next flight, the autonomous helicopter's 16th overall, could take place as soon as this Saturday.

The mission's planners don't know how long the plucky vehicle will last, because it has far out-lived its design lifetime, so they're just enjoying the ride. Thanks to this new video, we can as well.

The little Mars helicopter that could is pushing the limits of Martian flying. 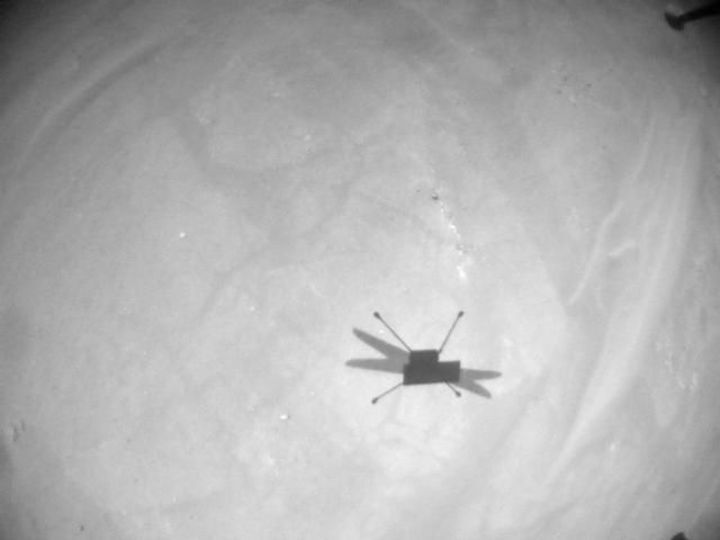 A photograph of the Ingenuity helicopter's shadow on the Martian surface captured during the chopper's 16th flight, on Nov. 21, 2021. (Image credit: NASA/JPL-Caltech)

The Mars helicopter Ingenuity made its latest hop on Sunday (Nov. 21), about two weeks after its previous flight. According to a description of plans for the flight published on Nov. 16, the sortie was designed to carry Ingenuity one step closer to its original airstrip, dubbed Wright Brothers Field.

"#MarsHelicopter continues to thrive!" mission personnel wrote in a tweetposted Monday (Nov. 22). "The mighty rotorcraft completed its 16th flight on the Red Planet last weekend, traveling 116 meters northeast for 109 seconds. It captured color images during the short hop, but those will come down in a later downlink."

Ingenuity's first four flights on Mars, way back in April, all began and ended from Wright Brothers Field. And as originally designed, the mission was not meant to do much more: Ingenuity launched as a technology demonstration mission meant to fly only five times within a month.

But the chopper's early flights went so smoothly that NASA decided to extend its mission and send the little helicopter to scout out ahead of its larger companion, the Perseverance rover. Recent flights have seen Ingenuity cover regions dubbed Raised Ridges and South Séítah, which feature quite rough terrain for the rover to tackle but are particularly intriguing to geologists, hence the use of the airborne scout.

Ingenuity's current series of flights is hopping the little helicopter back to the Perseverance rover's landing site at Octavia E. Butler Landing in preparation for making a new excursion to a location dubbed "Three Forks" for the rover's second science campaign, according to a NASA plan published in June.

Although Ingenuity is showing no signs of flagging, the helicopter's journey has become more difficult during recent flights. The chopper, along with the rest of NASA's Mars fleet, was grounded for a few weeks earlier this autumn as the sun interrupted communications between Earth and the Red Planet.

Meanwhile, as the Martian seasons change, the atmosphere around Ingenuity is thinning, forcing the helicopter crew to increase the spin rateof the chopper's blades.

The new sample comes from the same rock Perseverance sampled earlier this month. 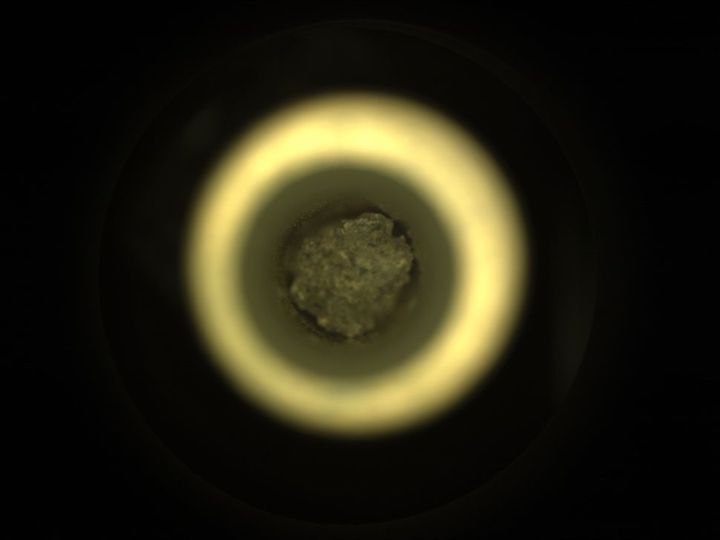 The car-sized robot just snagged its fourth Red Planet rock sample, drilling another core from an intriguing stone that it first sampled a little over a week ago.

"A rock so nice, I sampled it twice! Just capped and sealed my fifth sample tube, with another piece from this interesting rock. I'm doubling up on samples at some high-priority targets like this one," Perseverance rover team members wrote Wednesday (Nov. 24) via the mission's official Twitter account, posting two photos of the sampling operation as well. 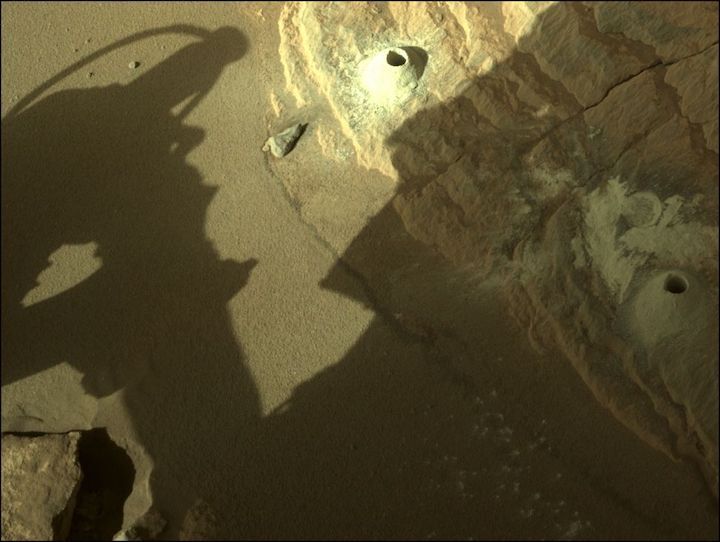 Perseverance landed in February on the floor of Mars' Jezero Crater, which hosted a big lake and a river delta billions of years ago. The rover is hunting for signs of ancient Mars life and collecting dozens of samples, which a joint NASA-European Space Agency campaign will haul to Earth, perhaps as early as 2031.

Perseverance has sealed five sample tubes to date, as the above tweet notes. But one of those tubes is empty: The first rock the robot tried to sample, back in August, proved to be exceptionally soft, crumbling to bits that didn't make it into the designated titanium tube.

The newly collected sample comes from the same rock that Perseverance drilled on Nov. 15. That stone is rich in the greenish mineral olivine, a magnesium iron silicate that makes up most of Earth's upper mantle.

"There are several ideas among my science team about how it got there. Hypotheses are flying! Science rules," the Perseverance team tweeted on Nov. 16, when it announced the successful collection of sample number three.

Perseverance may be millions of miles from its home planet, but it's not alone. The rover landed with a tiny robotic partner, a 4-pound (1.8 kilograms) helicopter named Ingenuity, which has demonstrated that aerial exploration is possible on Mars.

Ingenuity is now performing scouting work for Perseverance. The little chopper has racked up 16 Red Planet flights to date, the most recent of which took place on Sunday (Nov. 21).