Engineers at NASA’s Langley Research Center in Hampton, Virginia begin a new series of four water impact drop tests with a test version of the capsule for NASA’s Orion spacecraft to better understand what Orion and its crew may experience when landing in the Pacific Ocean after Artemis missions to the Moon.
Credits: NASA

The test will air live on NASA Television, the NASA app and the agency’s website, and will livestream on multiple agency social media platforms, including the Facebook channels for Orion and Langley.

The public may ask questions on social media using #AskNASA.

This series of drop tests began March 23 to finalize computer models for loads and structures prior to the Artemis II flight test, NASA’s first mission with crew aboard Orion. Artemis II will carry astronauts around the Moon and back, paving the way to land the first woman and next man on the lunar surface and establish a sustainable presence at the Moon under the Artemis program. The current test series builds on previous tests and uses a configuration of the crew module based on the spacecraft’s final design. 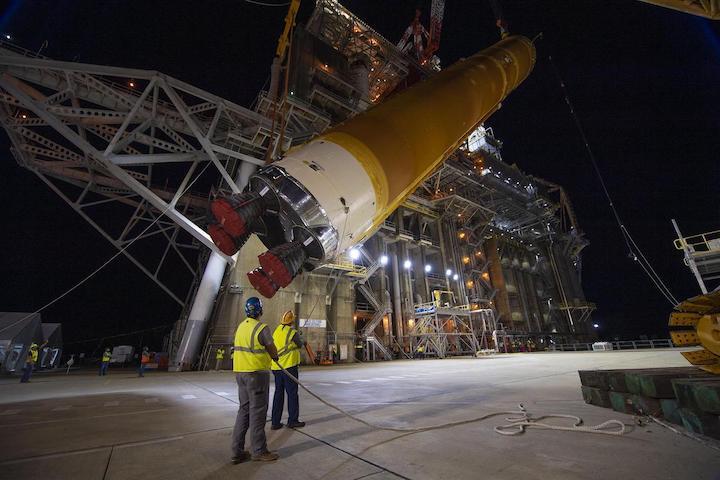 Teams at Stennis Space Center in Mississippi removed the core of NASA’s first Space Launch System heavy-lift rocket from a test stand earlier this week for loading onto a barge to carry it to Kennedy Space Center in Florida, where the rocket stage is due to arrive by the end of the month to start final preparations for a test flight around the Moon.

NASA managers are still hoping to launch the first Space Launch System test flight with an unpiloted Orion crew capsule by the end of the year. Steve Jurczyk, NASA’s acting administrator, told Spaceflight Now earlier this week that the mission — known as Artemis 1 — could launch as soon as the end of October if all the final preparations go perfectly.

But that is rarely the case for new rockets, and has not been the history of NASA’s long-delayed SLS program. Jurczyk acknowledged it will be “very challenging” to have the rocket ready to go in the October or November timeframe.

A more realistic schedule shows the Artemis 1 mission launching in the first quarter of 2022, officials said.

The SLS is central to NASA’s plans to return humans to the Moon. NASA will use the gigantic rocket to launch astronauts toward the Moon aboard Orion spacecraft. The agency is also developing a mini-space station to put into orbit around the Moon, and NASA announced last week it selected SpaceX to build the lander to ferry the astronauts to and from the lunar surface on the first Artemis landing mission.

The hot fire test was the culmination of the so-called Green Run test campaign at Stennis. With the eight-minute test-firing complete, ground crews at Stennis dried and cleaned the rocket’s Aerojet Rocketdyne RS-25 main engines, and inspected the rocket’s sheath of orange insulating foam.

The next step was to begin disconnecting the propellant and gas lines leading to the rocket. After some weather delays, ground teams finally lift the core stage out of the test stand Monday as crews removed it from the facility’s structural support brackets.

Photos released by NASA showed the Boeing-built core stage being raised out vertically of the massive test stand — once used to test-fire Apollo-era Saturn 5 rocket boosters — and then rotated on its side for placement into a cradle. The SLS team at Stennis planned to load the rocket into NASA’s Pegasus barge by the end of the week to start the journey to Florida’s Space Coast.

The Green Run checkout campaign at Stennis was the only time NASA plans to send an SLS core stage to the Mississippi test complex. Future SLS core stages, which will launch people, will ship directly from their factory in New Orleans to Florida aboard the Pegasus barge.

The Pegasus barge, once used to transport space shuttle fuel tanks, was specially modified to accommodate the even larger SLS core stage. The vessel will travel down the Pearl River from Stennis, through the Gulf of Mexico, around the southern tip of Florida, then up the Atlantic coast to reach NASA’s launch base.

Officials at Kennedy are eager to start working with the core stage. The two 177-foot-tall (54-meter) solid rocket boosters for the first SLS test flight, supplied by Northrop Grumman, are fully stacked on the rocket’s mobile launch platform in High Bay 3 inside the Vehicle Assembly Building.

“The team has been very excited to finally get the real hardware in our hands,” said Cliff Lanham, senior vehicle operations manager for Kennedy’s exploration ground systems program. “We’ve seen drawings. We’ve seen PowerPoints for the last many years, and to see the real hardware, it really gives everybody kind of a jolt of energy.”

Lanham said the core stage is the “next big piece of the puzzle.” All other components of the Space Launch System and the Orion spacecraft for the Artemis 1 mission are already delivered to Kennedy.

“Part one is getting these boosters stacked, and getting Orion prepared, and we’re working that,” Lanham said. “But now, with the core stage, that makes the big boosters dwarfed because now you’ve got a 212-foot stage that’s coming. That’s going to to re-energize us as well.

“We can really start saying, ‘Hey, we’re going to get there. We’re going to launch this rocket,'” Lanham said.

Teams will offload the core stage from the Pegasus barge in the Kennedy Space Center’s Turn Basin, then roll the rocket on a horizontal transport to the nearby VAB, where it will enter the south door and remain in the transfer aisle — the cavernous passageway in between the rocket assembly bays — for several weeks of work.

“The minute that barge shows up out here at the Turn Basin, we’re ready to go,” Lanham said. “We’ve got to take it off the barge, we’ve got to bring it into the low bay up here.”

Technicians will work on the rocket’s thermal protection system foam and begin installing pyrotechnic charges for the core stage’s range safety destruct system. Then ground crews aim to be ready by mid-May to rotate the rocket vertical and lift it by crane into High Bay 3. The crane operator will carefully lower the core stage in between the two SLS solid rocket boosters.

Workers will connect the core stage with each booster with braces at forward and aft attach points. Next will be stacking of the SLS upper stage, derived from the second stage used on United Launch Alliance’s Delta 4-Heavy rocket, and an adapter that will support the Orion spacecraft.

The rocket will be crowned with a mass model of the Orion spacecraft for structural resonance testing of the fully-stacked launch vehicle. Once that is complete, teams will move the real Orion spacecraft — already integrated with its launch abort system — to the VAB for attachment to the top of the Space Launch System.

The fully-assembled Space Launch System and Orion spacecraft will stand 322 feet (98 meters) tall. During launch, the rocket’s four RS-25 engines and twin solid rocket boosters will generate 8.8 million pounds of thrust. It can send about 59,500 pounds (27 metric tons) of mass to the Moon, more than any rocket operating today.

NASA plans to roll the Space Launch System out of the Vehicle Assembly Building for the first time as soon as August — but more likely in the fall — to travel to pad 39B for a countdown rehearsal. The launch team will load super-cold liquid hydrogen and liquid oxygen propellants into the rocket and practice countdown procedures.

After that is done, the rocket will return to the VAB for final checkouts and preparations, then will roll out to pad 39B again for launch.

“It’ll be very challenging to meet the … end of calendar year target date,” Jurczyk said in an interview earlier this week. “We have a schedule. We know what needs to happen when with respect to integrating the vehicle, and then integrating the launch vehicle with Orion and everything, and we’ll be tracking that.

“As long as we keep hitting those milestones, we have a shot, but as soon as we see we’re missing those two or three milestones, then we’ll probably take a look at the schedule and really take a hard look at whether November is possible.”