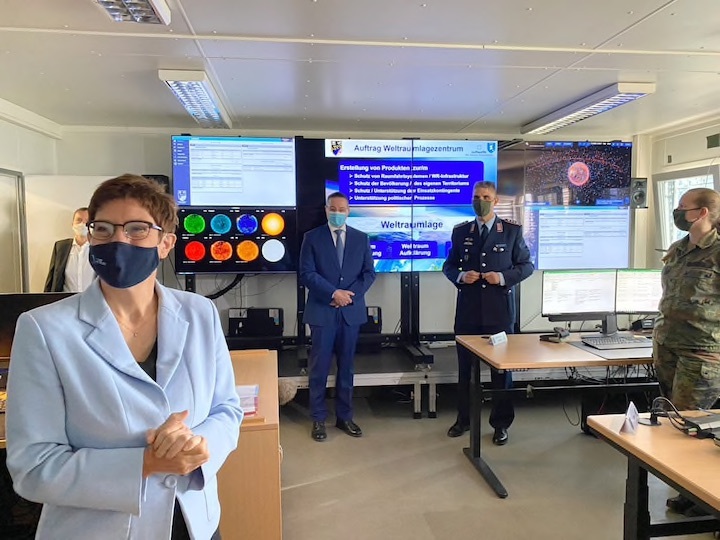 PASING, Germany — On a balmy June afternoon, members of the defense and space industries, regional lawmakers, and other observers gathered just outside of Munich, Germany, to witness the opening of new space company Mynaric’s first serial production facility.

The company, which launched in 2009 as a spinoff from the German Aerospace Center, will build laser communication equipment at scale out of its 1,600-square-meter facility. Per the company, Mynaric’s announced contracts for hardware delivery are currently all for U.S.-based customers, including the Defense Advanced Research Projects Agency and the Space Development Agency. A few memoranda of understanding have been signed with customers in Europe and the rest of the world, a spokesperson said.

That situation is illustrative of many “new space” companies based in Germany. NATO allies like the United States and France are dedicating evermore resources to military space assets; notably, both Washington and Paris have separated some of their space-related bureaucracies away from their airborne military branches, with the new U.S. Space Force and the French Space Command, respectively.

Germany, on the other hand, has articulated the importance of space, but has yet to put many actual euros behind the statement, observers say. That comes in part from Berlin’s longstanding investments in the automotive and machining sector — where much of the government’s research and development funds go — and an ongoing reluctance to dedicate more resources to the country’s military budget.

But German-based companies like Mynaric and microsatellite launcher Isar Aerospace are betting that, in the long run, Germany and other European governments will understand the value of their products — not just for the commercial market but also for government and defense uses.

“Google is easy to use. Using satellites isn’t quite as easy, yet,” Mynaric CEO Bulent Altan said at the opening event of the production facility.

Mynaric is counting on that bet: Officials announced plans to produce 2,000 units per year by using a diversified supply of commercial off-the-shelf components as well as specific proprietary, built-to-print components selected for their scalability and redundancy.

The company is currently providing its optical cross-link terminals for DARPA’s Blackjack program, which seeks to prove the viability of a proliferated small satellite constellation in low Earth orbit. Mynaric also worked with other cross-link providers as well as the Space Development Agency to develop an interoperability standard to ensure laser cross-links on the U.S. military’s small satellites can communicate effectively with commercial constellations in development by Amazon, SpaceX, OneWeb, Telesat and more.

The “new space” sector arrived with a bang in the last half decade, thanks to rapid developments in launch capability, reduced launch costs and the business case for small-satellite technology showing promise. While there is currently an appetite for these companies to work on both American and European commercial programs aimed at creating major space-based constellations, the vast majority of government-funded programs still reside in the United States.

Some European government leaders want to get more involved. Space has been a traditional driver for many large nations’ militaries, but the “new space” technology sector may be more appropriate for Germany since it applies to smaller use cases, said Thomas Sattelberger, a member of the German Bundestag from the state of Bavaria and a member of the nation’s Free Democratic Party.

Speaking on a panel at Mynaric’s facility opening ceremony, Sattelberger noted that Germany could find a viable business model in being “hidden deep-tech champions.”

Defense projects are fighting for research dollars against the long-established automotive industry, Sattelberger said. “The country has long rested on the laurels of building cars and machinery,” but if those funds were put toward space technology efforts, that could push those efforts through the often fatal “investment valley of death.”

A worker is pictured inside Mynaric's new serial production facility at the Oberpfaffenhofen special research airport outside Munich, Germany. The company is one of a raft of "new space" startups looking to connect with government markets in Germany and Europe. (Mynaric)

Many companies could benefit from such a shift in resources. A 2020 report commissioned by the aerospace trade support group Bundesverband der Deutschen Industrie, or BDI, showed that 92 related companies were founded in Germany over the past 20 years. More than one-third of those companies launched in the last five years.

Many of these companies are using venture capital to build themselves up. Mynaric was formerly VC-backed before going public in 2017.

Isar Aerospace, which emerged in 2018 out of a student research group at the Technical University of Munich, has raised more than $100 million in venture capital, said CEO Daniel Metzler.

However, it has been difficult for Isar to receive European or German government funding, he said.

“When we have applied for European grants, for example, we’ve just always been told that it’s too easy for us to get venture capital,” meaning government funding would be deemed needless, he explained.

Much of German government funding goes toward the automotive industry because it is “by far the biggest job-creating industry,” Metzler noted. Another challenge is that many government officials don’t fully understand the space industry, he added. Meanwhile, “in the U.S., we were seeing billions and billions [of dollars] flowing into U.S. companies developing launchers, developing satellite constellations.”

Germany risks losing these new space companies to neighbors like Luxembourg and Switzerland if the government doesn’t start investing itself in “anchor contracts” or additional research grants, Sattelberger said. An anchor contract involves a government agreeing to procure certain quantities of a commercial product or system that meets mission requirements, allowing the commercial venture to remain viable and keep the product cost effective.

Traditionally, even when Germany has allocated space contracts, they have all gone to the major prime contractors like Airbus, Thales and OHB.

“Germany and Europe in general need a system change in space based on the American model. Instead of developing and implementing space projects on their own, governments should purchase services and award more contracts to especially innovative ‘new space’ companies,” said Matthias Wachter, BDI’s head of international cooperation, security policy, raw materials and space. “The best way to strengthen the dynamic ‘new space’ ecosystem is through more government anchor contracts.”

So far, it’s been particularly difficult for these new space companies to break into the German defense sector. German Navy Rear Adm. Christian Bock, director of NATO’s Center of Excellence for Operations in Confined and Shallow Waters, acknowledged during the panel that the government has been slow to accept military space applications, which made it difficult to develop the optimistic spirit needed to advance the sector.

“As the military, we’re not exactly sexy,” he noted.

Space is “somehow pretty far away for the German military,” Wachter added. “That’s a big mistake because without space, future wars are definitely lost.”

While Isar Aerospace doesn’t have any military-related contracts, Metzler sees defense becoming “more and more important,” as platforms such as the Franco-German-Spanish Future Combat Air System will rely significantly on in-space connectivity, and agencies like NATO are placing a greater emphasis on space capabilities.