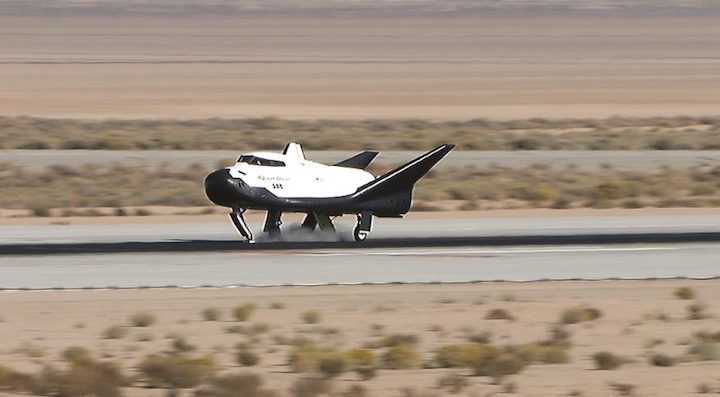 WASHINGTON — Sierra Space, the new space subsidiary of Sierra Nevada Corporation, announced June 9 that it signed an initial agreement with a British spaceport that could lead to landings of the company’s Dream Chaser vehicle there.

The MOU came after Sierra Space performed a study, supported by the U.K. Space Agency, evaluating the feasibility of using the spaceport for Dream Chaser landings. The lifting body vehicle is designed to glide to a landing on runways, and the initial study concluded the spaceport is “a suitable and viable return location for the orbital return” for Dream Chaser, Sierra Space said in a statement.

The MOU is not a final agreement regarding hosting Dream Chaser at the spaceport. Instead, Sierra Space said it will lead to more detailed studies “for potentially naming Spaceport Cornwall as an approved orbital return location for the company’s Dream Chaser spaceplane missions in the future.” The company didn’t announce a timeline for that study or approving Spaceport Cornwall for spaceport landings.

“In the backdrop of the G7 Summit, Sierra Space is pleased to announce the ongoing progress we are making with Spaceport Cornwall as a viable site for Dream Chaser,” Fatih Ozmen, chief executive of Sierra Nevada Corporation, said in the statement. The G7 summit is taking place in Cornwall June 11–13.

Sierra Space is the second company to announce plans to use Spaceport Cornwall. Virgin Orbit has an agreement to conduct flights of its air-launch LauncherOne system from the spaceport, with the first such mission no earlier than 2022.

“Spaceport Cornwall is a multi-user spaceport and it’s a great achievement to add an additional launch partner to our consortium a year ahead of first launch from the site in 2022,” Melissa Thorpe, head of Spaceport Cornwall, said in the statement.

Sierra Nevada Corporation has long touted the ability of Dream Chaser to land at a wide range of airports and has worked on studies with several airports. However, all the missions it currently has under contract through NASA’s Commercial Resupply Services program involve landing the Dream Chaser at Space Florida’s Launch and Landing Facility, the former Shuttle Landing Facility runway at the Kennedy Space Center.

The announcement is one of the first for Sierra Space since it was established as a subsidiary of Sierra Nevada Corporation. That move, announced in April, was intended to allow it to better capture the growth it foresees in commercial space using Dream Chaser and, later, commercial space stations.