NASA plans to launch Dragonfly to Titan in 2027 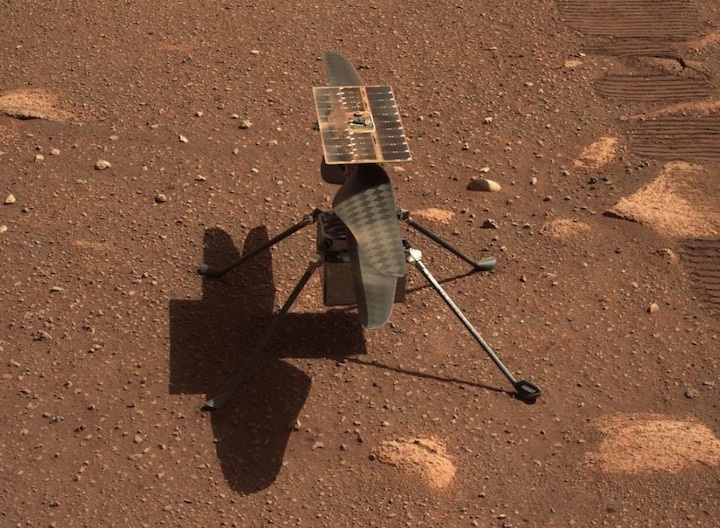 NASA made history last month after pulling off the first-ever controlled flight of an aircraft on another planet. The success is good news for engineers working on NASA’s next drone helicopter mission on another world: flying an 8-bladed rotorcraft dubbed Dragonfly over the surface of Saturn’s largest and richly organic moon, Titan.

The 4-pound Ingenuity Mars helicopter has successfully carried out four flights since it arrived on the red planet aboard the Perseverance rover in February, and is set to fly for the fifth time Friday.If all goes well, it will reach a new height record of about 33 feet and land in a new location.

“Ingenuity’s experience flying autonomously on Mars will be very valuable, we’ll learn from the challenges they face and how to solve them,” Mehta said during a Q&A.

NASA plans to launch Dragonfly in 2027, with arrival expected in 2034. The rotorcraft, which flies like a drone and will be the size of a car, will fly to dozens of locations on the icy moon to analyze samples in search for the building blocks of life. The conditions on Titan could provide clues to how life may have arisen on Earth.

Just last fall, NASA scientists identified a molecule in the moon’s atmosphere, C3H2, a carbon-based molecule that researchers say may be a precursor for more complex organic molecules that could lead to life on Titan.

While flight on Mars is challenging due to the planet’s thin atmosphere, Titan’s very dense atmosphere and low gravity are favorable for Dragonfly to lift off.

“Titan is very far from Earth. It takes over an hour to send data to Titan, and over an hour to get that data back. Because of that we can’t simply have someone driving or flying from Earth. We need Dragonfly to be able to go place to place on its own like Ingenuity,” he said.

“These missions provide inspiration. They’ll inspire future ideas for interplanetary exploration and certainly help us push our boundaries even further.”