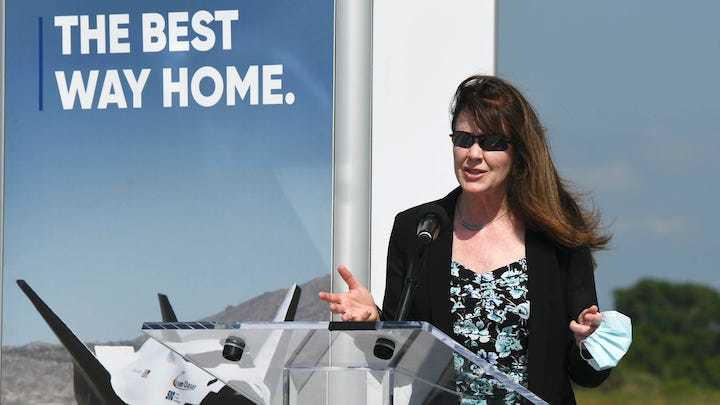 The Dream Chaser spaceplane, which resembles a mini space shuttle, is officially approved to land at the shuttle’s old runway at Kennedy Space Center.

Officials, including KSC Center Director Bob Cabana, gathered at the Launch and Landing Facility operated by Space Florida with an inflatable mock-up to announce the FAA’s recent approval.

“I landed here last, I think, in 2001 and have great memories. I landed here all three times, so I love this place,” said former shuttle astronaut Janet Kavandi who is now executive vice president of Space Systems at Sierra Nevada Corp.  “This inflatable looks a lot like the real thing although the real thing is a bit bigger than that.”

The Dream Chaser is a reusable, space utility vehicle capable of transportation services to and from low-Earth orbit and is capable of a runway landing.

Under a contract with NASA, the plane is now slated to launch atop United Launch Alliance’s Vulcan rocket from KSC and deliver cargo to the International Space Station in 2022.

Kavandi said the company intends to fly humans on the Dream Chaser at some point.

“You will someday see this vehicle land on this runway and people walk right off of it, and that will be a wonderful day, she said.

The manufacturer of the plane, Sierra Nevada Corporation, recently created a separate space company, Sierra Space to accelerate progress and take advantage of the investment boom in commercial space.

The company is looking to expand in Brevard, which may include contracting out some additional engineering design and manufacturing but for now the focus is on spacecraft processing for the future flights.

“We’re actually here today to look for increased processing capability because we’re going to need some significant square footage to take care of the processing of these vehicles.”

She said they plan on hiring a significant number of people in the area to support that effort.