Skywatchers can expect an exciting few nights when the Eta Aquarids meteor shower peaks this week. The meteor shower is expected to begin Tuesday and last until Thursday, with the most meteors being visible Wednesday before dawn, according to EarthSky.org.

The best viewing location will be in the southern hemisphere — and all you need to do is look up.

What are the Eta Aquarids?

The Eta Aquarids meteor shower peaks each year during early May as Earth passes through the debris trail from Halley's Comet (1P/Halley). The Orionids meteor shower in October also originates from this comet.

The famous Halley's Comet is visible from Earth about every 76 years. It was last seen in 1986 and won't be visible again until 2061.

Each year, when Earth collides with the comet's orbit, vaporizing debris comes flying into our atmosphere at a whopping 148,000 miles per hour, according to NASA, making the meteors well known for their speed. Fast meteors tend to leave glowing dust "trains" behind them, producing magnificent "shooting stars."

Under normal conditions, the annual meteor shower typically produces about 30 meteors per hour. It's named for its radiant, or direction of origin, which appears to come from the constellation Aquarius.

The Eta Aquarids are one of the best meteor showers of the year for people in the Southern Hemisphere, because Aquarius is higher in the sky there — but it's visible in the northern hemisphere, too. 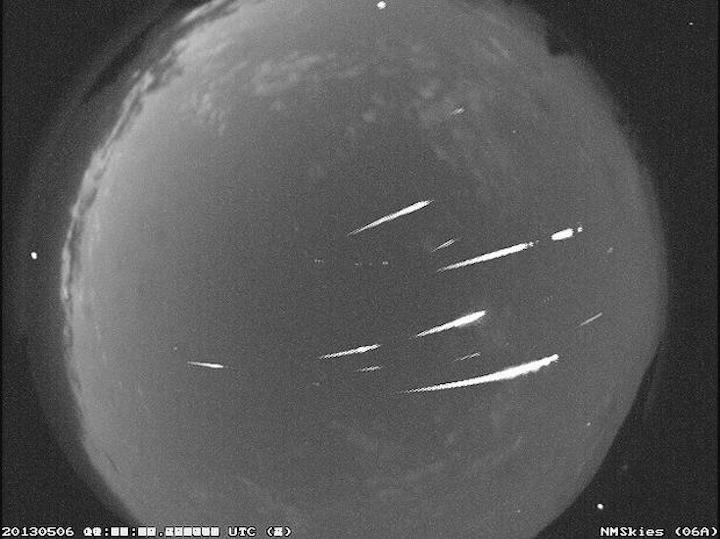 When and where to watch the Eta Aquarids

The shower is visible in both hemispheres, with the best viewing occurring just before dawn on Wednesday. Locating the radiant point is not necessary for viewing — all you need to do is look up.

Viewing in the southern hemisphere is preferable, but not necessary. From the northern hemisphere, the shooting stars often appear as "earth grazers": Long meteors that appear to skim the surface of the Earth near the horizon.

To view any meteor shower, it's advised to escape harsh city lights and find an open area. Lie flat on your back with your feet facing east and look up, allowing about 30 minutes in the dark for your eyes to adjust.