The description by Sparks is essentially the same.

The file is faded and difficult to read. It only contains a five page Air Intelligence report filed by the investigating officer from the 4602nd Air intelligence service squadron. While it gathered information from the witness, the investigating officer did nothing further to see if there was a solution. He simply concluded that the “turn” was unlike any sighting seen before and suggested it might have been an optical illusion due to the witness intensely concentrating on the object.

According to the record card, the event lasted 12 minutes and was visible in the Western and Southwestern sky. The object changed shape from being diagonal to horizontal. It was also initially a long thin line but then changed to a shorter and fatter shape. During the observations, the object changed color from white to pink to red. The object was initially at 270 degrees azimuth and 30 de- grees elevation. The witness also described a change in shape of the object where the “north end” bent such that the north end became the south end. This took about 30-60 seconds. Finally, the witness mentioned seeing a “dark tip” on the original “north end” of the object.

The witness included a sketch showing the path of the object and how it changed shape.4 I took some effort to clip and enhance the faded document. While this reproduction is not the best, it does convey what the witness described. 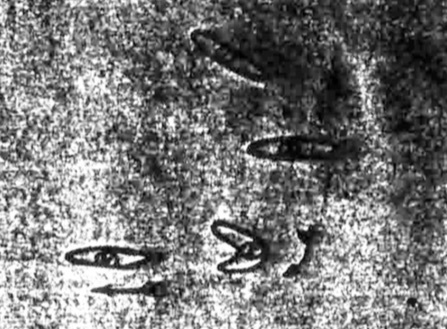 The witness was the only observer and saw it through a second story window. The sun was behind a cloud bank but the object ap- peared to have been visible in a clear portion of sky since the witness stated it never passed in front of a cloud. In fact, the witness indicated it had passed behind a small cloud at one point. He added that it could have been an aircraft or natural object.

Sunset time was 4:41 PM PST, which means the sun was only 3-4 degrees above the southwest horizon. The object was obvious some distance away since it passed behind a cloud and it appears to have been fairly small in angular size. Speed appears to have been slow but this is probably an illusion due to the distance from the observer to the object.

The description of the object is not that impressive. Other than the changing shape, it has the indications of being a contrail visible during dusk. The color change, duration, and direction of travel all seem to conform to this hypothesis. Even the sighting of a dark object at one end of the UFO indicates he might have seen the aircraft that created the contrail. One must remember that this is 1954, when jet contrails were something of a novelty as this newspaper story from 1954 indicates. 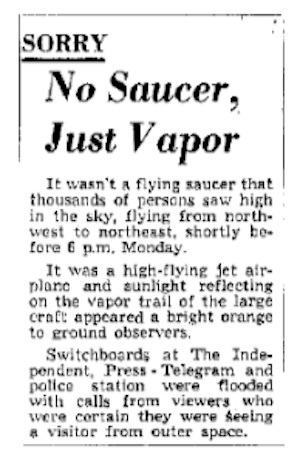 The shape change could have been a perception issue due to the witness looking through a win- dow or it may have appeared that way as the aircraft conducted a turn from going west to the south. One cannot say for sure but I don’t consider it a serious issue with the contrail explanation.

In my opinion, I think this should be reclassified as probably an airplane contrail. I would not be surprised if it were a military air- craft out over the ocean. It is too bad that the investigating officer did not bother to do any further investigation to see if there was any military air activity to the west. Had he done so, it might have been solved in 1954.