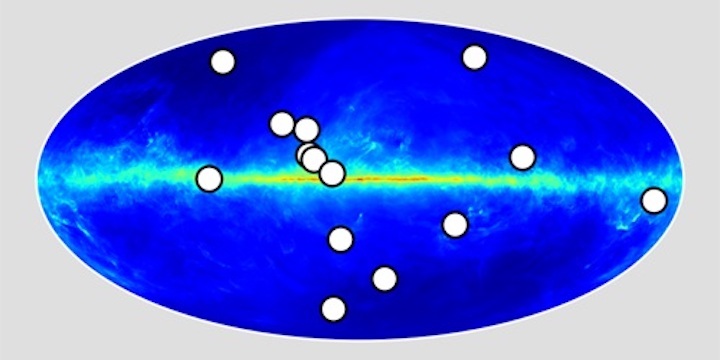 Fourteen possible antimatter stars (“antistars”) have been flagged up by astronomers searching for the origin of puzzling amounts of antihelium nuclei detected coming from deep space by the Alpha Magnetic Spectrometer (AMS-02) on the International Space Station.

Three astronomers at the University of Toulouse – Simon Dupourqué, Luigi Tibaldo and Peter von Ballmoos – found the possible antistars in archive gamma-ray data from NASA’s Fermi Gamma-ray Space Telescope. While antistars are highly speculative, if they are real, then they may be revealed by their production of weak gamma-ray emission peaking at 70 MeV, when particles of normal matter from the interstellar medium fall onto them and are annihilated.

Antihelium-4 was created for the first time in 2011, in particle collisions at the Relativistic Heavy Ion Collider at the Brookhaven National Laboratory. At the time, scientists stated that if antihelium-4 were detected coming from space, then it would definitely have to come from the fusion process inside an antistar.

However, when it was announced in 2018 that AMS-02 had tentatively detected eight antihelium nuclei in cosmic rays – six of antihelium-3 and two of antihelium-4 – those unconfirmed detections were initially attributed to cosmic rays colliding with molecules in the interstellar medium and producing the antimatter in the process.

Subsequent analysis by scientists including Vivian Poulin, now at the University of Montpellier, cast doubt on the cosmic-ray origin, since the greater the number of nucleons (protons and neutrons) that an antimatter nucleus has, the more difficult it is to form from cosmic ray collisions. Poulin’s group calculated that antihelium-3 is created by cosmic rays at a rate 50 times less than that detected by the AMS, while antihelium-4 is formed at a rate 105 times less.

The mystery of matter and antimatter

The focus has therefore turned back to what at first may seem an improbable explanation – stars made purely from antimatter. According to theory, matter and antimatter should have been created in equal amounts in the Big Bang, and subsequently all annihilated leaving a universe full of radiation and no matter. Yet since we live in a matter-dominated universe, more matter than antimatter must have been created in the Big Bang – a mystery that physicists have grappled with for decades.

“Most scientists have been persuaded for decades now that the universe is essentially free of antimatter apart from small traces produced in collisions of normal matter,” says Tibaldo.

The possible existence of antistars threatens to turn this on its head. “The definitive discovery of antihelium would be absolutely fundamental,” says Dupourqué.

The 14 candidates were identified from a total of 5787 gamma-ray sources catalogued over 10 years by Fermi’s Large Area Telescope, and have allowed Dupourqué, Tibaldo and von Ballmoos to calculate constraints for the possible populations of antistars in the Milky Way.

If antistars formed in the spiral disc of the galaxy alongside normal stars, then they calculate that there is one antistar for every 400,000 ordinary stars. If, on the other hand, antistars are primordial, dating from the early universe when the Milky Way was just forming, meaning that they are located in the oldest part of the Milky Way (the galactic halo), then as many as a fifth of the stars there could be antistars.

“Locking up antimatter in antistars would be a plausible way to spare antimatter from being annihilated,” says von Ballmoos. “Particularly if they hide away in regions of relatively low densities of normal matter, like the galactic halo.”

Poulin, who was not involved in the detection of these 14 candidates, agrees that if antistars are real, then a primordial origin is most likely, since clouds of antihydrogen “would have annihilated on very short time scales,” he says. Instead, “they would have formed in the very early universe.”

Given the speculative nature of antistars, it is quite possible that all 14 candidates will turn out to be something more mundane. Dupourqué, Tibaldo and von Ballmoos suggest that a possible next step should be to check whether the 14 candidates emit electromagnetic radiation at other wavelengths that could reveal them to actually be active galactic nuclei or pulsars.

Meanwhile, the GAPS experiment, a balloon mission set to launch later this year, will join the search for antimatter cosmic rays. One of its aims is to independently confirm the AMS’ antihelium detections, which for now should be treated with caution because they are a statistically low sample, say Dupourqué, Tibaldo and von Ballmoos.

“The conventional claim is that the detection of antihelium-4 is a smoking gun for new physics, and the existence of antistars,” says Poulin. If antistars can be shown to be real, then they promise to alter our view of cosmology, astrophysics and particle physics.