ALAMEDA, California — Rocket builder Astra wants to simplify the launch business, with the soon-to-be-public company on a quest to both cut manufacturing costs while dramatically increasing the number of launches to a daily rate.

Astra is preparing to go public by the end of June through a merger with SPAC Holicity, in a deal that will infuse as much as $500 million capital into the company. In the meantime, Astra is expanding its headquarters on the San Francisco Bay while the company prepares for its next launch this summer.

A SPAC, or special purpose acquisition company, raises capital in an initial public offering and uses the proceeds to buy a private firm and take it public.

CNBC toured Astra’s growing facility earlier this month, a visit which was joined by chairman and CEO Chris Kemp and vice president of manufacturing Bryson Gentile.

The company’s leadership features a variety of backgrounds from the space and tech industries: Kemp from NASA and cloud software provider OpenStack, and Gentile from SpaceX. Meanwhile Lyon came from Apple, Gonzalez from Tesla, and Dahm from electric vehicle maker NIO. 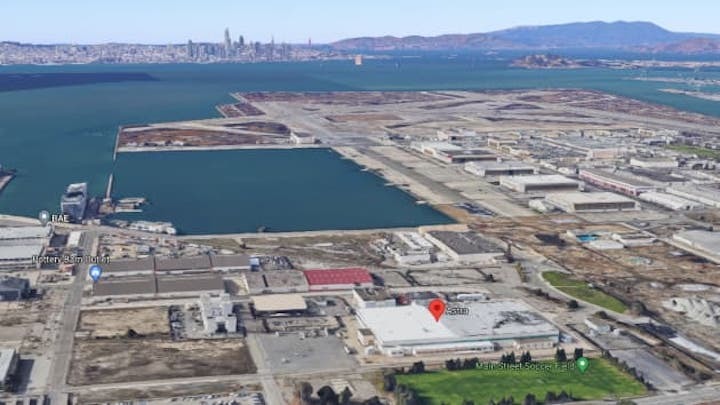 An overview of Astra headquarters’ location on the San Francisco Bay in Alameda, California.
Google Maps

Astra’s facility uses infrastructure left over from the U.S. Navy’s former Air Station Alameda. The company first started out with about 30,000 square feet. It’s now expanding into about 250,000 square feet of space – including all the way out to the edge of the bay, where a newly built city ferry terminal connects Alameda to downtown San Francisco, a 10-minute ride away.

The main area of the company’s headquarters, about 25% of its footprint, features an open space for much of its rocket development and assembly.

Astra has also put all its equipment on wheels, with the company’s leadership emphasizing the flexibility it wants to maintain as it builds out its production capabilities.

Its near-term goal is to reach orbit, the next hurdle after its most recent launch broke the barrier to space in December. The next Astra launch is planned for this summer, which will also be the first to generate revenue for the company.

Astra’s rocket stands 40 feet tall, and is capable of carrying up to 100 kilograms to low Earth orbit – putting it in the category of small rockets, a category currently led by Rocket Lab.

A closer look at half an Astra rocket nosecone, also known as a fairing.
Michael Sheetz | CNBC

The company emphasized the cost-cutting methods its implemented into its approach, with Astra believing that it’s feasible to get to a production rate of one rocket per day within a few years. The company’s staff compares its rocket to building a small Cessna aircraft.

One example of that Astra showed off during the tour was how it builds it fairings – the nosecone of the rocket that protects satellites during launch.

The company said the first fairing it used was made of composite carbon fiber, which is typical in the space industry given how light and stiff the material is. But the carbon fiber fairing cost $250,000, necessitating a different solution since the company wants to eventually get the total cost of its rocket down to less than $500,000.

Astra chose to build its second fairing out of metal, which it got down to about $130,000. Yet the company needed to go further.

Vice president Gentile explained how the company now uses aluminum tubing to give the fairing its strength, combining that with a dozen petals, which are thin, curved pieces of metal. That’s reduced the cost of the fairings to $33,000.

Astra plans to get under $10,000 per fairing, by stamping it rather than riveting it together.

Another long-term hurdle for the company will be working with regulators to quickly get licenses for launches if it’s able to reach a daily rate. Astra’s leadership said it is working very closely with the Federal Aviation Administration on how to streamline the licensing process, and noted that it wants to have a dozen or more spaceports around the world as well.

Astra is also streamlining the operational aspect of its launches, reducing the number of people in its mission control to less than 10 and only needing six people for setting up the rocket at the physical launch site.

Its goal is to reduce the number of people in mission control to just two, effectively a pilot and a co-pilot, by automating most of its processes.

Its rocket system, including the strongback which lifts the vehicle vertical for a launch, all packs into a few shipping containers.

First, Astra rolls a strongback out of the container and into the factory. Then, an overhead crane drops the rocket straight onto the strongback. Finally, the whole system is rolled into a container and then shipped off.

Astra has three strongbacks in assembly, with more to come.

The thick doors that lead to one of Astra’s rocket engine testing bays, which previously was a U.S. Navy engine testing facility.
Michael Sheetz | CNBC

The evening before the CNBC tour Astra conducted testing on the upper stage of a rocket. This made the engine bay a chilly spot to visit, thanks to the below-freezing temperatures of a liquid oxygen tank.

Inside an Astra testing bunker, where senior manager Andrew Pratt shows a pair of fuel tanks connected to a rocket upperstage from testing the night before.
Michael Sheetz | CNBC

During a hot fire test, when one of Astra’s Delphin rocket engines is fired up, the inside of the chambers reaches 1,200 degrees Fahrenheit. Astra representatives said the company can conduct as many as 10 to 15 tests of a rocket’s first stage in a day, or more than 30 upper-stage tests in a day.

Looking back down the exhaust tunnel of Astra’s testing bay.
Michael Sheetz | CNBC

Astra will continue to expand its current footprint in Alameda, including a lease for a 500-foot pier and plans for an ocean launch platform that it would be able to load up with a rocket in the bay.

The view behind Astra’s headquarters in Alameda, California, looking out across the San Francisco Bay.
Michael Sheetz | CNBC

Kemp told CNBC in February that Astra’s plan for “daily space delivery” is fully funded through 2025, thanks to the SPAC capital.