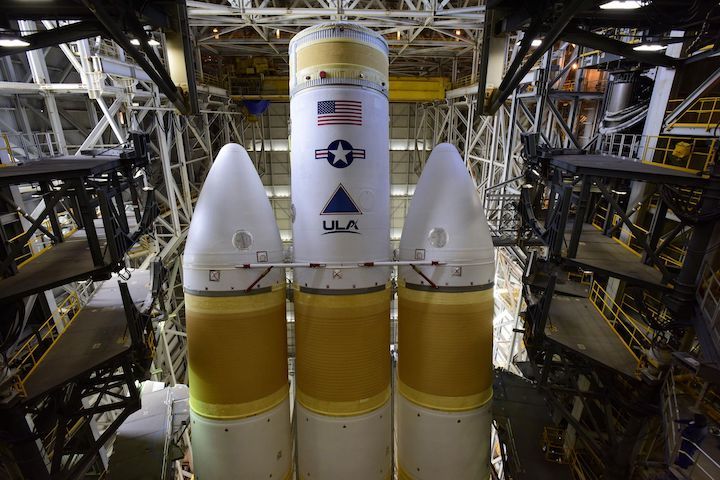 Standing upright at Space Launch Complex-6 at Vandenberg Air Force Base, the Delta IV Heavy rocket awaits the arrival of its cargo, a top secret payload for the National Reconnaissance Office, and nose cone ahead of the planned launch this spring. (Contributed photo)

A short trip for a Delta IV Heavy rocket served as the prelude for a much longer trek this spring at Vandenberg Air Force Base.

Stretched out on its transporter trailer equipped with 36 wheels, the United Launch Alliance booster recently traveled from the Horizontal Integration Facility to its stand at Space Launch Complex-6 on South Base.

Upon arrival, the hulking rocket was raised into a standing position in anticipation of its blastoff later this spring.

The Delta IV Heavy employs three common booster cores side by side to give the rocket more power for carrying monstrous-sized payloads into space.

The trip to the launch pad was one of many key milestones before the rocket’s countdown to zero and its longer trip to place a top-secret payload in space for theNational Reconnaissance Office for a mission dubbed NROL-82.

The Delta IV Heavy's components have spent the past 10 months readying for the trek to the launch pad.

Following a sea-faring voyage from its Decatur, Alabama, manufacturing plant to the Central Coast, the Delta IV Heavy arrived at Vandenberg last spring, according to ULA.

Unloading the vessel dubbed R/S RocketShip took a bit longer than planned due to an uncooperative ocean.

Since then, the rocket components have undergone assorted tests to prepare for flight.

Still to come is installation of the cargo — typically the size of a bus — scheduled to ride inside the rocket’s nosecone, or payload fairing.

The behemoth Delta IV Heavy rocket arrives at Space Launch Complex-6 at Vandenberg Air Force Base so crews can finish readying the booster for its launch this spring to carry a National Reconnaissance Office payload into orbit. (Contributed photo)

Once fully assembled, the Delta IV Heavy rocket will stand some 23-stories tall.

After the payload completes processing, the spacecraft will be placed atop the rocket and the nosecone will be snapped into place.

That step won’t occur until after the launch team completes “a wet dress rehearsal,” which involves conducting a practice that includes loading fuel and achieving other pre-launch milestones, but remaining in place once the countdown reaches zero.

This will be ULA’s 13th Delta IV Heavy and the fourth from Vandenberg.

The West Coast’s previous Delta IV Heavy rocket blasted off in January 2019, also to carry an NRO payload into space.

After a light year in 2020 due to few satellites needing rides to space aboard rockets launched from Vandenberg, the pace will pick up in 2021. This spring also may bring the debut of a booster built by a fledgling firm, Firefly Aerospace.

Vandenberg recently kicked off its 2021 launch year with the first test of an unarmed Minuteman III intercontinental ballistic missile. 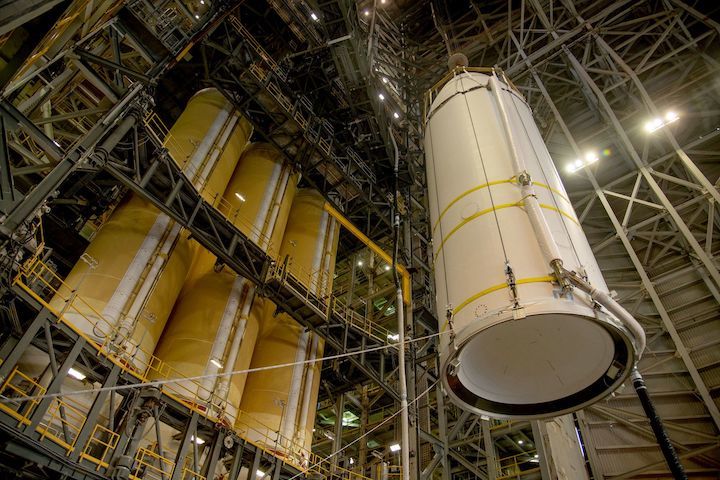 A Delta IV Heavy rocket and its top-secret cargo at Vandenberg Air Force Base now have been united ahead of their targeted departure date.

United Launch Alliance recently announced that the 233-foot-tall rocket will aim for an afternoon blastoff on April 26.

The Delta IV Heavy already sits at Space Launch Complex-6, once planned to be the home of the West Coast space shuttle program, on South Base.

Crews recently placed the payload, only identified as key for national security, atop the booster as one more vital step to ready for launch.

Since the rocket will carry spacecraft for the National Reconnaissance Office, the targeted launch time and actual launch window for the rocket have not been released for the mission dubbed NROL-82.

However, on Monday NRO officials said the launch opportunity would stretch from 12:39 p.m. to 3:57 p.m. The planned launch time will be released closer to the liftoff date.

While some launch sites can be seen from off-base viewing sites, SLC-6 sits in a valley as one of the most southern launch facilities at Vandenberg.

Spectators must await the rocket’s rise above the hills to see the flight — as long as Mother Nature keeps the marine layer away.

Before mating the payload to the rocket, the Delta IV Heavy team recently conducted a “wet dress rehearsal” in which they performed a mock countdown, including key pre-launch milestones such as fueling the rocket, which remained on the pad after reaching zero.

The practice session allowed the team to test various systems to spot any potential issues that could cause delays on launch day.

For the exercise, the rocket’s cargo and its 63-foot-long nosecone or payload fairing had not been attached yet as a precaution.

This will be ULA’s 13th Delta IV Heavy launch and the fourth from Vandenberg.

The West Coast’s previous Delta IV Heavy rocket blasted off in January 2019, also to carry an NRO payload into space. 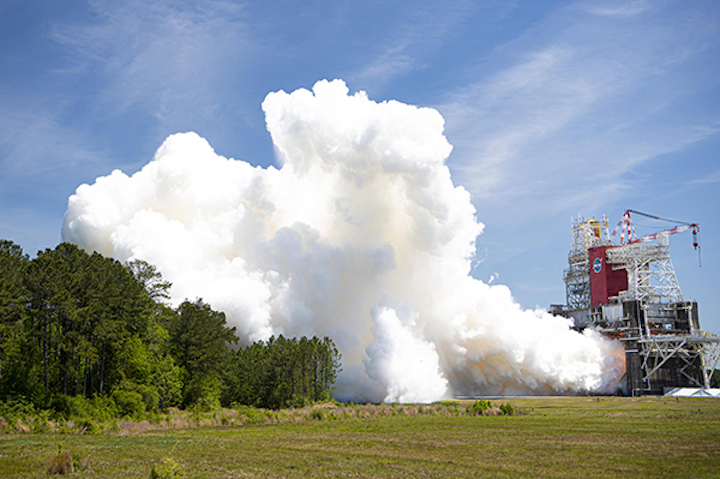 Today, the world’s most powerful hydrogen-fueled rocket engine built by Aerojet Rocketdyne, the RS-68A, completed its final hot-fire acceptance test for use on the United Launch Alliance (ULA) Delta IV Heavy launch vehicle on the B-1 Test Stand at NASA’s Stennis Space Center in Mississippi.

ULA’s Delta IV Heavy rocket uses three Aerojet Rocketdyne RS-68A engines; one on each of its three common booster cores to launch the nation’s most critical spacecraft into orbit. The three RS-68A engines combine to generate more than two million pounds of thrust for the Delta IV Heavy.

“The throttleable RS-68A engine has been the centerpiece of the Delta IV Heavy rocket for more than 15 years,” said Eileen P. Drake, Aerojet Rocketdyne CEO and president. “We are very proud of the 65 engines flown to date and their flawless performance record.”

Conceived using a simplified design approach to lower cost while maintaining its overall reliability, the original variant of the engine, the RS-68, was first tested at Edwards Air Force Base in California; testing later moved to Stennis in 2000. The RS-68 powered Delta IV made its inaugural flight in 2002.

“We’ve continued to improve the RS-68 engine, which today remains the most powerful hydrogen-fueled rocket engine in the world,” said Jim Maser, Aerojet Rocketdyne senior vice president of Space. “This engine was developed entirely with company funds to be a very cost competitive and extremely reliable booster engine.”

The upgraded RS-68A, which generates 705,000 pounds of thrust at sea level, completed its first test firing in September 2008, was certified in April 2011 and made its inaugural flight in June 2012.

“Our RS-68 test partnership with Aerojet Rocketdyne spans more than 20 years and the final RS-68 hot-fire test closes out a historic chapter in propulsion testing at Stennis Space Center,” said NASA’s Stennis Space Center Director Richard Gilbrech. “The RS-68 was the first engine to be both assembled and tested at Stennis. While this particular test project is ending, we look forward to continued work with Aerojet Rocketdyne on future endeavors.”

In addition to launching numerous payloads supporting the U.S. Air Force Space Command and the National Reconnaissance Office, the Delta IV Heavy carried NASA’s Orion spacecraft on the EFT-1 mission in December 2014, and launched the Parker Solar Probe on its mission to unlock the mysteries of the Sun in August 2018. The Delta IV Heavy, powered by the RS-68A engine, continues to be the primary heavy-lift launch vehicle for the United States.

Aerojet Rocketdyne’s work at NASA’s Stennis Space Center continues with final assembly and test of the RS-25 engine that powers the core stage of America’s next super heavy-lift rocket, the Space Launch System (SLS). The most powerful rocket ever built, SLS will send humans to explore the Moon as part of the NASA’s Artemis program.