Never-before-seen particles called axions could be behind the mysterious X-rays. 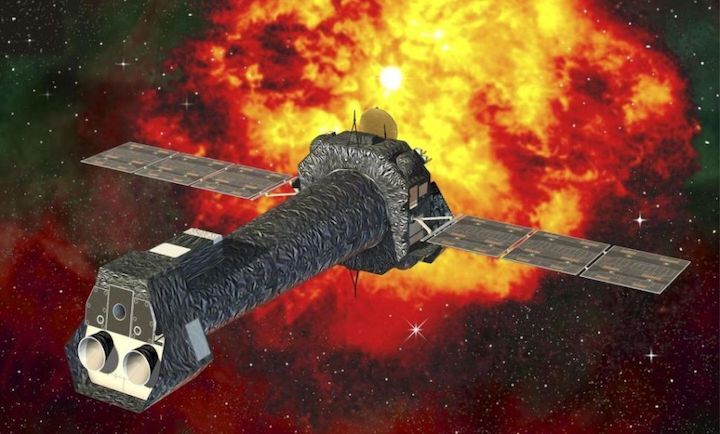 An artistic rendering of the XMM-Newton (X-ray multi-mirror mission) space telescope. A study of archival data from the XMM-Newton and the Chandra X-ray space telescopes found evidence of high levels of X-ray emission from the nearby Magnificent Seven neutron stars, which may arise from the hypothetical particles known as axions.

More than 400 light-years from Earth, there is a cluster of young neutron stars that are too hot for their age. These stars, known as the "Magnificent Seven," emit a stream of ultra-high-energy X-rays that scientists haven't been able to explain.

Now, scientists have proposed a possible culprit: axions, theoretical particles that turn into light particles when they are in the presence of a magnetic field.

In a new study, published Jan. 12 in the journal Physical Review Letters, Lawrence Berkeley National Laboratory physicist Benjamin Safdi and colleagues used supercomputers to model the idea that axions produced inside the stars could convert to X-rays in the magnetic fields outside the stars. Axions have never been observed directly, but they were first theorized to exist in the 1970s. It's too soon to say for sure whether axions exist or whether they're the true culprit for the weird X-rays, Safdi said, but researchers hope the new computer modeling may point to something outside the Standard Model of physics, which describes known subatomic particles.

"We are pretty confident this [X-ray] excess exists and very confident there's something new among this excess," Safdi said in a statement. "If we were 100% sure that what we are seeing is a new particle, that would be huge. That would be revolutionary in physics."

Given their age and type, the Magnificent Seven should be emitting only low-energy X-rays and ultraviolet light. But astronomers have observed something they can't explain: high-energy X-rays coming off the stars. Neutron stars are the leftovers from giant stars that have exhausted their fuel and collapsed; one type of neutron star, called a pulsar, gives off emissions across the electromagnetic spectrum, including high-energy X-rays. But the Magnificent Seven aren't pulsars.

Scientists have also searched behind the neutron star cluster for other objects that could be emitting the mysterious X-rays, but neither the European Space Agency's XMM-Newton telescope nor NASA's Chandra X-ray telescope has turned up anything that could be the culprit.

Axions have also been proposed as a solution to the mystery. But could axions really be produced inside a neutron star? To find out, Safdi and his colleagues turned to supercomputers at the University of Michigan and Lawrence Berkeley National Laboratory.

"There is a lot of data processing and data analysis that went into this," Safdi said. "You have to model the interior of a neutron star in order to predict how many axions should be produced inside of that star."

An axion, if it exists, is an elementary particle with a very low mass. Axions might be a component of dark matter, the unobserved stuff that seems to make up over a quarter of the universe's mass, based on its gravitational effects.

Safdi and his team found that axions might work a lot like neutrinos, another extremely light subatomic particle that has been shown to exist. Neutrinos are produced inside neutron stars when neutrons bump into one another; axions could be produced in the same way.

Given their low mass and weak interactions with other matter, axions could easily escape the cores of neutron stars and zip out into space. Extremely strong magnetic fields surround neutron stars. In the presence of these fields, axions would convert into photons, or light particles. Traveling at wavelengths shorter than visible light, these light particles would register as high-energy X-rays on astronomical instrumentation.

"We're not claiming that we've made the discovery of the axion yet, but we're saying that the extra X-ray photons can be explained by axions," Raymond Co, a postdoctoral researcher at the University of Minnesota who collaborated on the study, said in the statement. "It is an exciting discovery of the excess in the X-ray photons, and it's an exciting possibility that's already consistent with our interpretation of axions."

The next step, Safdi said, is to look for axions in white dwarfs, another set of stars that shouldn't emit X-rays.

"This starts to be pretty compelling that this is something beyond the Standard Model if we see an X-ray excess there, too," he said.