SpaceX has placed more than 1,000 Starlinks in orbit, and other companies are following suit. Here’s the latest on what’s being done to protect astronomy. 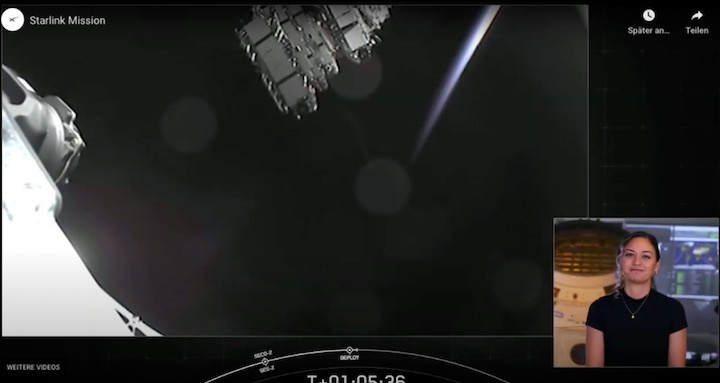 On January 20th, SpaceX sent yet another volley of satellites into low-Earth orbit. This latest launch continues to build the company’s Starlink network, which aims to provide broadband internet in hard-to-reach places around the world. Despite recent developments, the growing number of satellites still deeply troubles astronomers.

Starlink now has 952 satellites in operational orbit (out of 1,015 launched), according to spaceflight observer Jonathan McDowell, which makes it the leader of a growing pack when it comes to large satellite constellations. At the same time, Starlink has also led the way in engaging with astronomers and voluntarily reducing the satellites’ impact on astronomy.

At the 237th meeting of the American Astronomical Society (AAS), SpaceX representative Patricia Cooper presented improvements to the original Starlink design, reducing the brightness of all satellites launched since July 2020 using a sunshade. SpaceX also implemented changes to all of the operational satellites’ orientations to minimize reflection.

Astronomer Patrick Seitzer (University of Michigan, Ann Arbor) confirmed these mitigations have dimmed the so-called “VisorSats” to about a third the brightness of the original satellites, a significant improvement. As Cooper put it, “What a difference a year makes.”

Even with the VisorSat design, though, the Starlink satellites are still brighter than the recommended 7th-magnitude limit, which would put all satellites out of range of unaided eyes. “The 7th-magnitude brightness target is enormously helpful,” Cooper said. “Now we have something to drive toward.”

At the same time, Cooper suggested there might be a limit to what the company can do. “We’re going to come to a point of — not the end of creative brainstorming, but some lead prospects that we want to put more effort and emphasis on,” she said.

Even if SpaceX manages to dim its satellites to 7th magnitude, though, chief scientist Tony Tyson of the Vera Rubin Observatory pointed out that a Starlink streaking across a single exposure taken by the observatory’s sensitive, wide-field camera would still be 40 million times brighter than the typical galaxy in the image.

“There’s an impact there that is impossible to remove,” Tyson said. When a telescope reaches down to 25th magnitude, simple rejection algorithms, such as those that suffice to clean most amateur astrophotos, don't work.

The 7th-magnitude recommendation came as part of SATCON1, a conference that took place from June 29 to July 2, 2020. The conference recognized that SpaceX, while a leader, is far from the only player in the game: Other participants included OneWeb and Amazon’s Project Kuiper, both of whom also had representatives at the AAS panel event, as well as professional and amateur astronomers and dark-sky advocates.

Participants assembled guidelines for both satellite and telescope operators to mitigate the threat that numerous, bright satellites would pose to astronomy, wide-field astrophotography, and stargazers.

For satellite operators, in addition to the blanket 7th-magnitude limit, the group also proposed an altitude-dependent brightness limit, and it recommends satellites fly no higherthan 600 km.

OneWeb’s 74 satellites are above that limit, at 1,200 km. They’re correspondingly fainter than Starlinks at first glance, with a median magnitude of 7.9. But due to their greater distance, OneWeb satellites travel at slower speeds and appear more in focus to telescopes. According to Tyson, the surface brightness of a 7.9-magnitude, 1,200-km OneWeb satellite streaking across an image is actually the same as a 7th-magnitude Starlink satellite at 500 km.

Despite the recommendation, OneWeb is unlikely to change altitude; it already has approval from the Federal Communications Commission (FCC) to fly there. And while it has recently streamlined its constellation plans (in part due to new ownership following a Chapter 11 reorganization), the company still ultimately plans to put 6,372 satellites in the sky.

Project Kuiper also has FCC approval for 6,236 satellites, though at the lower altitude of 600 km. Combined with the 12,000 in Starlink’s final constellation (which could go up to 42,000, if a 2019 filing wins approval), that’s more than 24,000 satellites and possibly up to 54,000 satellites from just three companies. And there are smaller companies looking to edge in, too. So it’s not surprising that astronomers and even satellite operators agreed that depending on the goodwill of individual companies would not suffice in the long-term.

“We have dealt primarily with the big three constellations,” Seitzer said. “But sliding under the telescope cover, so to speak, there are many smaller constellations of 30 to 50 satellites. My concern is that we will get blindsided by them as their numbers grow and grow and grow.”

International regulation will be key, they agreed — in part to prevent companies from simply moving to countries with more lax restrictions.

To that end, Connie Walker (NSF’s NOIRLab) and colleagues have recently written up a report to be submitted the United Nations Committee on the Peaceful Uses of Outer Space outlining recommendations to protect dark skies, including guidelines for satellite operators. The UN is not a regulatory body, so if the plan is ultimately approved, it would then go to member nations for policy and enforcement.

While academia, federal agencies, and international bodies move along at an “Entish” pace, as panel participant Aparna Venkatesan (University of San Francisco) put it for the Tolkien fans, the satellite-constellation industry continues to develop on a fast clip. SpaceX aims to provide global service by the end of the year; meanwhile, OneWeb plans to have its first-generation network of 648 satellites aloft by mid-2022.

Also in 2022, the Rubin Observatory is due to start operations, beginning full-sky observations intended to generate a decade-long movie of the night sky. But it will have to do so while dealing with satellites too numerous to dodge and too bright as yet to completely remove from observations.

“This notion of future-proofing is a charming idea,” Tyson said, referring to the idea that observatories can take actions now to protect themselves as near-Earth space becomes more crowded. “But very frankly, we did a lot of simulations and found that there is no combination of mitigations that we know of that can correct for the lost science — particularly the discovery of the unexpected.”