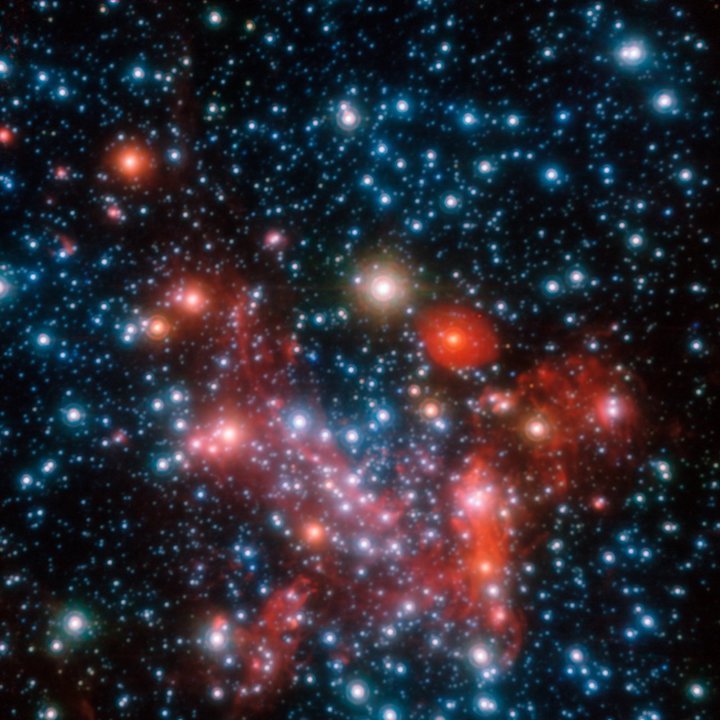 A series of mysterious events recorded by a cosmic-ray observatory a decade ago could be the signature of an unusual form of dark matter called “axion quark nuggets” – according to Ariel Zhitnitsky of the University of British Columbia in Canada. These nuggets are hypothetical bundles of antiquarks (or quarks) wrapped inside a layer of axions that would only reveal their presence when passing through dense regions of the universe such as stars and planets.

Zhitnitsky proposed axion quark nuggets in 2003 to explain a property of dark matter that otherwise requires artificial tuning of certain physical parameters – the fact that the densities of dark matter and visible matter in the universe are very nearly the same, when they could in principle be completely different.

Axion quark nuggets are an adaptation of the idea of strange matter, put forward by Edward Witten in 1984. Particles containing up, down and strange quarks are usually unstable and decay rapidly, but the Pauli exclusion principle leaves open the possibility that a large enough number of such quarks could create dense stable entities known as stranglets – since more of the quarks would occupy lower energy states than is the case in normal matter containing only up and down quarks.

Zhitnitsky built on this by encasing these particles with a layer of axions. Axions are hypothetical particles postulated in the late 1970s to ensure that neutrons could be described in terms of the strong force without breaking charge-parity (CP) symmetry. Later, axions became a candidate for dark matter. In the case of axion quark nuggets, they would enclose dark matter made up of quarks rather than forming the dark matter themselves.

The idea is that the universe would contain equal quantities of matter and antimatter at all times. Early on in cosmic history, CP-violating axions would have led to the creation of more nuggets containing antiquarks than those containing quarks. Conversely, there would have been more quarks available for nucleosynthesis than there were antiquarks. The net result would be a visible universe dominated by quark matter while most of the mass inside nuggets – the dark matter – would consist of antiquarks.

With the density of nuclear matter, these nuggets could have macroscopic masses — perhaps about 10 g — while measuring less than a thousandth of a millimetre across. They would interact extremely weakly with other matter and in the rarified environment of deep space would remain almost entirely inert. Only in the presence of more dense matter, such as at the centre of galaxies or in planetary atmospheres, could they reveal their presence.

According to Zhitnitsky, the Telescope Array in Utah, US, might have seen such interactions. The observatory, run by an international collaboration, uses hundreds of scintillation detectors spread out over nearly 700 km2 to detect the air showers produced when very high-energy cosmic rays interact with nuclei in the Earth’s atmosphere. However, a small part of the data collected by the array between 2008 and 2013 appears anomalous.

In 2017, the collaboration reported having observed what it described as 10 short bursts of detections that looked different to normal cosmic-ray air showers. It calculated that there was less than a one in 10,000 chance that these bursts, involving the recording of at least three microsecond-long air shower events within a millisecond, could have been due to the random coincidence of individual air showers. What is more, all of those events took place during thunderstorms – the bursts being strongly correlated with lightning strikes in both time and space.

In a paper accepted for publication in Journal of Physics G, Zhitnitsky explains that these events can be very naturally explained by axion quark nuggets. He says that some of the antiquarks inside nuggets streaming in from outer space would annihilate with atmospheric quarks, generating a range of particles including positrons. He argues that is only when the nuggets pass through the strong electric fields beneath thunderclouds that these positrons would be liberated in sufficient quantities and then accelerated to the high energies that allow them to travel several kilometres through the atmosphere and into the detectors on the ground.

As to why the nuggets lead to clusters of detections, he says that the thunderclouds’ electric fields fluctuate continuously. In other words, a nugget must pass through a region of the field aligned with the detector array to yield detectable positrons. From other regions there will be no signal.

In his paper, Zhitnitsky lists several other characteristics of the bursts that he claims point to their being generated by axion quark nuggets. These include the fact that the bursts originate at much lower altitudes than conventional cosmic-ray showers. In addition, he says, the measured energies of the individual events are five to six orders of magnitude higher than would be expected from their rates – given that more energetic cosmic rays tend to be rarer.

Beyond the anomalies seen by the Telescope Array, Zhitnitsky argues that a range of other astrophysical and experimental data also point to this type of nugget. These include a very pronounced, but much debated seasonal variation in events recorded by the DAMA/LIBRA detector in the Gran Sasso National Laboratory in Italy – which he reckons could be due (indirectly) to the nuggets rather than weakly interacting massive particles.

Establishing whether these particles really are responsible for the strange-looking air showers should be relatively straight forward, he reckons. For one thing, he says, tens of kilometres of optical fibre could be used to try and pick up the acoustic and seismic signals that would accompany any incoming nuggets. Another tell-tale sign would be a very short radio pulse with a frequency of up to a few hundred megahertz that would be generated alongside the accelerated positrons.

Others, however, doubt that the Telescope Array has seen axion quark nuggets. Pace VanDevender, who leads the MQN Collaboration also investigating quark-nugget dark matter, reckons that the positrons would be annihilated long before they could reach the detectors on the ground – estimating their range in the atmosphere to be about 1 mm rather than several kilometers. He thinks that seismic detectors could potentially pick up a signal from nuggets reaching Earth but cautions that event rates “will need to be carefully calculated” before setting up an array of such sensors.