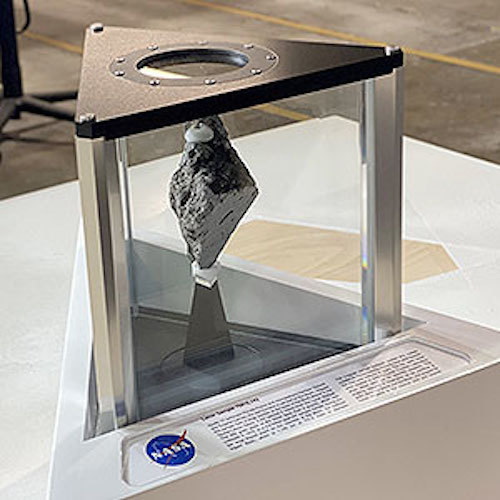 Joe Biden was three weeks from taking office as a freshman U.S. senator when the moon rock that is now newly on display in the White House was collected by astronauts on the lunar surface.

Six terms in Congress, two terms as the Vice President of the United States and one presidential inauguration later, Biden and the lunar sample 76015,143 will now share the Oval Office.

The Biden Administration requested an Apollo-recovered moon rock for display as "a symbolic recognition of earlier generations' ambitions and accomplishments, and support for America's current moon to Mars exploration approach," according to NASA. The 0.7-pound (333-gram) rock, held by a metal clamp and encased in glass, sits on the bottom shelf of a recessed bookcase beside a painted portrait of Ben Franklin and adjacent to the Resolute desk.

"Thank you to the President of the United States for putting a NASA moon rock in the Oval Office — look at what we can do together as a country when we are united," Ellen Stofan, director of the Smithsonian National Air and Space Museum in Washington, D.C., wrote on Twitter, responding to a photo of the newly-redecorated room as published by The Washington Post on Wednesday (Jan. 20).

From the moon to the room (by way of Berlin)

A descriptive plaque on the base of the White House moon rock display explains that the 3.9-billion-year-old sample was chipped "from a large boulder at the base of the North Massif in the Taurus-Littrow Valley" by Apollo 17 astronauts Eugene Cernan and Harrison Schmitt, the last (to date) humans to walk on the moon.

Once delivered to the Lunar Receiving Laboratory at NASA's Manned Spacecraft Center (today, Johnson Space Center) in Houston, Texas, the parent 6.2-pound (2,819-gram) rock was cut into smaller pieces, including number 143, the irregular shape sample now in the Oval Office.

Prior to arriving in the Biden White House, the same moon rock was exhibited at the German Museum of Technology (Deutsches Technikmuseum) in Berlin.

"We chose this sample as a good representation of both the uniqueness of lunar samples, the tiny craters made by micrometeorites that can be seen on one side, and the evidence of scientific research being done on the sample that can be seen in the flat, sawn sides," a NASA spokesperson told collectSPACE.

Biden is the first president to request a moon rock be on display in the Oval Office from his first day in office, but 76015,143 is the second lunar sample to be on long term loan to the White House.

On the 30th anniversary of the first moon landing in 1999, Apollo 11 crewmates Neil Armstrong, Buzz Aldrin and Michael Collins visited with then-President Bill Clinton in the Oval Office, when NASA loaned the White House a moon rock from the mission, lunar sample 10057,30. The rock, at Clinton's request, remained on display in the room until he left office in January 2001.

"The most valuable thing I had for perspective in politics in the White House was a moon rock," Clinton said in an interview for National Geographic's "StarTalk" in 2015. "I put the moon rock on the table and for the next two years, when we had Republicans and Democrats in, or people on two sides of any issue, and they'd start really, really getting out of control, I'd say, 'Wait, wait, wait — you see that moon rock, it is 3.6 billion years old. Now we're all just passing through here and we don't have very much time, so let's just calm down and figure out what the right thing to do is.' And it worked every single time."

"They were looking at an object that existed at a time they could hardly imagine and it just gave them that little bit of space in their mind and spirit to try to figure out, okay, let's go at this one more time," said Clinton.

At least one other moon rock has visited the White House, although it was only on loan from NASA for a day and was displayed in the Roosevelt room, outside of the Oval Office.

One of only 10 "touchstones" — exposed pieces of sample 70215 mounted so the public can touch a piece of the moon — the Apollo 17 rock was present on Dec. 11, 2017 for the signing of Space Policy Directive 1, which instructed NASA to send astronauts back to the moon, and then on to Mars, setting the foundation for the space agency's current Artemis program.