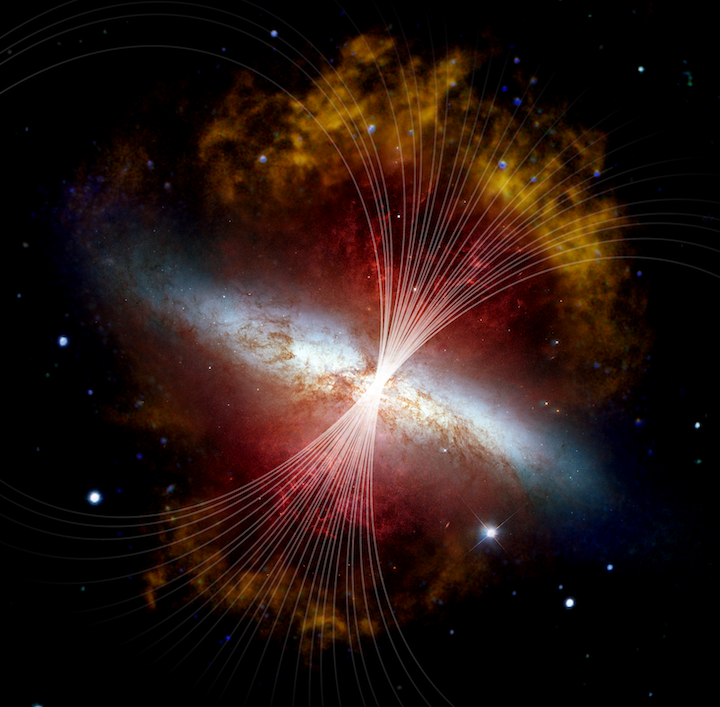 Magnetic fields in Messier 82, or the Cigar galaxy, are shown as lines over a visible light and infrared composite image of the galaxy from the Hubble Space Telescope and the Spitzer Space Telescope. Stellar winds streaming from hot new stars form a galactic super wind that is blasting out plumes of hot gas (red) and a huge halo of smoky dust (yellow/orange) perpendicular to the narrow galaxy (white). Researchers used the Stratospheric Observatory for Infrared Astronomy magnetic field data and tools that have been used extensively to study the physics around the Sun to extrapolate the magnetic field’s strength 20,000 lights-years around the galaxy. They appear to extend indefinitely into intergalactic space, like the Sun’s solar wind, and may help explain how the gas and dust have traveled so far away from the galaxy.
Credits: NASA, SOFIA, L. Proudfit; NASA, ESA, Hubble Heritage Team; NASA, JPL-Caltech, C. Engelbracht

What’s fueling the massive ejection of gas and dust out of the Cigar galaxy, otherwise known as Messier 82?

We know that thousands of stars bursting into existence are driving a powerful super-wind that’s blowing matter into intergalactic space. New research shows that magnetic fields are also contributing to the expulsion of material from Messier 82, a well-known example of a starburst galaxy with a distinctive, elongated shape.

The findings from NASA’s Stratospheric Observatory for Infrared Astronomy, or SOFIA, help explain how dust and gas can move from inside galaxies into intergalactic space, offering clues to how galaxies formed. This material is enriched with elements like carbon and oxygen that support life and are the building blocks for future galaxies and stars. The research was presented at the meeting of the American Astronomical Society.

SOFIA, a joint project of NASA and the German Aerospace Center, DLR, previously studied the direction of magnetic fields close to the core of Messier 82, as the Cigar galaxy is officially known. This time the team applied tools that have been used extensively to study the physics around the Sun, known as heliophysics, to understand the magnetic field’s strength surrounding the galaxy at a distance 10 times larger than before.

“This is old physics for studying the Sun, but new for galaxies,” said Joan Schmelz, a director at the Universities Space Research Association based at NASA’s Ames Research Center in Silicon Valley, and co-author of the upcoming paper about this research. “It’s helping us understand how the space between stars and galaxies became so rich with matter for future cosmic generations.”

Located 12 million light-years from Earth in the constellation Ursa Major, the Cigar galaxy is undergoing an exceptionally high rate of star formation called a starburst. The star formation is so intense that it creates a “super wind” that blows material out of the galaxy. As SOFIA previously found using the instrumented called the High-Resolution Airborne Wideband Camera, or HAWC+, the wind drags the magnetic field near the galaxy’s core so that it’s perpendicular to the plane of the galaxy across 2,000 light-years.

Researchers wanted to learn if the magnetic field lines would extend indefinitely into intergalactic space like the magnetic environment in the solar wind, or turn over to form structures similar coronal loops that are found in active regions of the Sun. They calculate that the galaxy’s magnetic fields extend out like the solar wind, allowing the material blown by the super wind to escape into intergalactic space.

These extended magnetic fields may help explain how gas and dust spotted by space telescopes have traveled so far away from the galaxy. NASA’s Spitzer Space Telescope detected dusty material 20,000 lightyears beyond the galaxy, but it was unclear why it had spread so far away from the stars in both directions instead of in a cone-shaped jet.

“The magnetic fields may be acting like a highway, creating lanes for galactic material to spread far and wide into intergalactic space,” said Jordan Guerra Aguilera, a postdoctoral researcher at Villanova University in Pennsylvania and co-author on the upcoming paper.

With rare exceptions, the magnetic field in the solar corona cannot be measured directly. So, about 50 years ago, scientists developed methods to accurately extrapolate magnetic fields from the Sun’s surface into interplanetary space, known in heliophysics as the potential field extrapolation. Using SOFIA’s existing observations of central magnetic fields, the research team modified this method to estimate the magnetic field about 25,000 light-years around the Cigar galaxy.

“We can’t easily measure the magnetic fields at scales this large, but we can extrapolate it with these tools from heliophysics,” said Enrique Lopez-Rodriguez, a Universities Space Research Association scientist for SOFIA based at Ames and lead author on the study. “This new, interdisciplinary method gives us the larger perspective that we need to understand starburst galaxies.”

SOFIA is a joint project of NASA and the German Aerospace Center. NASA’s Ames Research Center in California’s Silicon Valley manages the SOFIA program, science, and mission operations in cooperation with the Universities Space Research Association, headquartered in Columbia, Maryland, and the German SOFIA Institute at the University of Stuttgart. The aircraft is maintained and operated by NASA’s Armstrong Flight Research Center Building 703, in Palmdale, California. The High-Resolution Airborne Wideband Camera instrument was developed and delivered to NASA by a multi-institution team led by NASA’s Jet Propulsion Laboratory.