NASA has selected Carlos Vargas, a postdoctoral researcher in UArizona's Steward Observatory, to lead a $20 million mission to build a space telescope that will map vast regions of star-forming gas that have eluded observation for decades.

Led by UArizona's Carlos Vargas and funded with $20 million from NASA, the Aspera mission will launch a space telescope about the size of a mini fridge to observe galaxy processes that have remained hidden from view until now.

NASA has selected the University of Arizona to lead one of its four inaugural Astrophysics Pioneers missions. With a $20 million cost cap, the Aspera mission will study galaxy evolution with a space telescope barely larger than a mini fridge. The telescope will allow researchers to observe galaxy processes that have remained hidden from view until now.

Led by principal investigator Carlos Vargas, a postdoctoral researcher in UArizona's Steward Observatory, the Aspera mission seeks to solve a longstanding mystery about the way galaxies form, evolve and interact with each other. Intended for launch in late 2024, the space telescope is being specifically designed to see in ultraviolet light, which is invisible to the human eye.

The Aspera mission's goal is to provide the first-ever direct observations of a certain portion of the circumgalactic medium – vast "oceans" of low-density gas that permeate and surround individual galaxies and in some cases even connect them, bridging large distances across the universe.

The familiar pictures of galaxies as luminous archipelagos floating in space, filled with millions or billions of stars, tell only a small part of their story, Vargas said.

"As telescopes have become more sensitive and have allowed us to discover more exotic types of gases, we now realize there is tons of stuff in between galaxies that connects them," he said. "Galaxies are undergoing this beautiful dance in which inflowing and outflowing gases balance each other."

Processes such as supernova explosions blow gas out of the galaxy, and sometimes it rains back down onto the galactic disc, Vargas said.

Previous observations of the circumgalactic medium, or CGM, revealed that it contains several different populations of gas in a wide range of densities and temperatures astronomers refer to as phases. But one of these gas phases has eluded previous attempts at studying it, and Vargas said it's important because it is believed to host most of a galaxy's mass.

"There is this intermediate form we refer to as warm-hot, and that is particularly interesting because it provides the fuel for star formation," he said. "No one has been able to successfully map its distribution and really determine what it looks like."

The Aspera mission is designed to home in on that missing chunk of the CGM that astronomers know must be there but haven't been able to observe.

"Aspera is an exciting mission because it will lead us to discover the nature of mysterious warm-hot gas around galaxies," said Haeun Chung, a postdoctoral research associate at Steward Observatory.

"Though small, Aspera is designed to detect and map faint warm-hot gas, thanks to recent technological advancements and the increased opportunity that small-sized space missions provide," Chung said.

Because the portion of the CGM that researchers refer to as warm-hot is thought to host the lion's share of the mass that makes up a galaxy, it is a crucial piece of the puzzle for understanding how galaxies form and evolve, Vargas said.

The Aspera telescope will be the only instrument in space capable of observing in the ultraviolet spectrum, with the exception of the Hubble Space Telescope, which has surpassed its expected mission lifespan by many years.

Vargas said his team chose the mission's name, Latin for "hardship," to highlight the extraordinary difficulties that have needed to be overcome to observe and study the CGM.

"People have been going for this 'missing' gas phase for decades," he said. "We aptly named our telescope to honor their efforts."

"Being selected for the first iteration of NASA's Astrophysics Pioneers program is a testament to our excellent track record in space exploration – from providing the scientific approaches needed to tackle some of the most challenging questions in the universe, to developing innovative technology and providing successful management throughout the project," he said.

"Dr. Vargas's leadership on the Aspera mission reflects the excellent caliber of researchers attracted to the University of Arizona. We are particularly pleased because Dr. Vargas represents the exemplary nature of scientific inquiry at a Research 1 Hispanic-Serving Institution like the University of Arizona," she said. "To receive this prestigious award so early in his career demonstrates Dr. Vargas's incredible capability, and I am thrilled to see our researchers expanding our understanding of a subject as fundamental as galaxy formation and evolution."

Cantwell added that the newly launched University of Arizona Space Institute provided the research team with support, and it will be building support for other large and impactful space initiatives as the institute grows.

"I'm tremendously proud to be part of a university that encourages and supports early career scientists like Carlos Vargas and Haeun Chung – both post-doctoral researchers – and the faculty members and engineers in their team, to successfully compete for ambitious missions like Aspera," said Steward Observatory Director Buell Jannuzi. 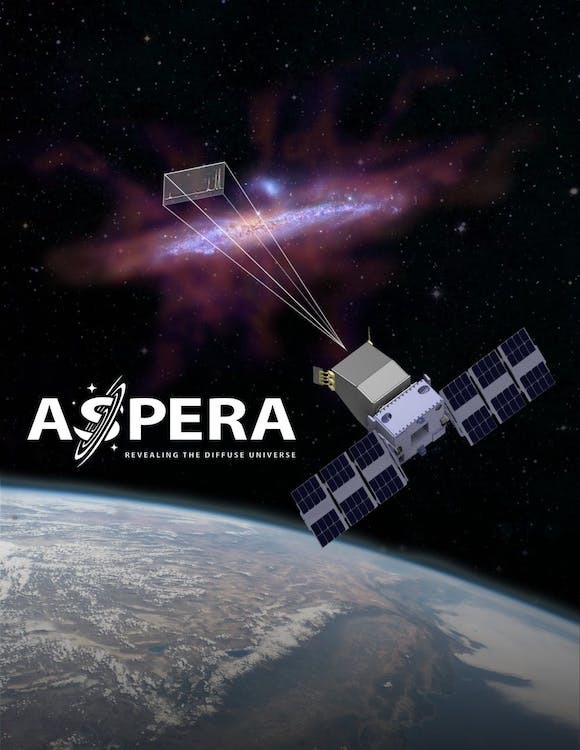 The University of Arizona will lead NASA's Aspera Mission. Photo courtesy of Carlos Vargas, who is a postdoctoral researcher in the UA’s Steward Observatory. According to Vargas, the Aspera mission will produce the world’s first maps of the mysterious "warm-hot" phase of gas that surrounds galaxies.

The University of Arizona will lead the NASA Aspera mission, which seeks to solve the mystery about the way galaxies form.

The mission will be led by Carlos Vargas, as principal investigator, who is a postdoctoral researcher in the UA’s Steward Observatory. According to Vargas, the Aspera mission will produce the world’s first maps of the mysterious "warm-hot" phase of gas that surrounds galaxies.

This phase contains gas at an estimated 300,000 degrees and accounts for more mass than all of the stars within the parent galaxy. This phase has been extremely difficult to study in the past due to technological limitations, and the need to go into space to observe things in the ultraviolet. Vargas explained that the need to go to space is because the ozone layer of the Earth’s atmosphere blocks ultraviolet photons.

The telescope they are developing works by collecting photons in the far ultraviolet, kind of like a light bucket.

“We will point the telescope at our targets and stare for weeks at a time to collect enough ultraviolet photons to produce maps of the warm-hot phase of gas,” Vargas said.

The biggest challenge they have faced so far has been designing a space telescope on an extremely tight budget. Vargas explained that while $20 million is a lot of money, it’s extremely small when you need to use it to build something that will need to operate in space.

Therefore, Vargas and his team have put a ton of time and effort into making sure Aspera will be possible to build on a tight budget. Vargas also explained that they are ready for any unforeseen challenges.

“The team is extremely adaptable and able to react to whatever may come our way,” Vargas stated.

The most surprising part of this mission so far has been the technological advancements that led to them being able to develop Aspera. Vargas explained that the general consensus in the field was that mapping warm-hot gas in the way they do with Aspera would be impossible for at least another decade.

There had been some recent improvements in ultraviolet technology in the last few years, so Vargas and his team decided to crunch the numbers again a few years ago to see if it would be possible for a small telescope. They were excited to see that it was now possible to build Aspera.

This project is expected to span five years into 2026, according to Vargas. The first phase of the project is a six-month concept study, Vargas and his team will be doing with NASA. Once given the green light, they will move forward with the 12-month "Formulation" phase, where they will finalize the design of the telescope down to each individual nut and bolt, Vargas explained. Lastly, the "Implementation" phase will take over three years. In that phase, Vargas and his team, will build the instrument and deliver it to NASA for launch. Their planned launch date is in November of 2024.

Vargas said that he had always been interested in space and it was those experiences he had when he was younger that led to him going into this research. He had grown up watching Star Trek with his mom. They would always have Star Trek reruns playing when he was a kid.

“I remember wanting to go into space and studying the stars since I was very young. It sort of just stuck ever since,” Vargas said.

Vargas also explained that he was lucky to have a high school physics teacher who went above and beyond in making sure he had access to extra materials.

“We would go to lecture series at the Princeton Plasma Physics Lab and he even helped me sign up for a four-college-credit class at Rutgers when I was in high school,” Vargas said.

Those interests Vargas had in space as a kid have led to him leading this mission which marks a new milestone in the UA’s history of space exploration.