A new set of U.S. postage stamps will soon shine light on a NASA mission exploring our nearest star.

The United States Postal Service (USPS) on Friday (Jan. 15) announced "Sun Science," a set of ten different stamps that will celebrate the ongoing study of the Sun using digital images from NASA's Solar Dynamics Observatory (SDO). The Forever-denomination stamps will be released later this year.

"I have been a stamp collector all my life and I can't wait to see NASA science highlighted in this way," Thomas Zurbuchen, associate administrator for NASA's Science Mission Directorate, said in a statement. "I feel that the natural world around us is as beautiful as art."

The "Sun Science" stamps depict the Sun in bold colors based on the different wavelengths that reveal or highlight specific features of its activity. The images display common events on the Sun, such as solar flares, sunspots and coronal loops.

NASA's Solar Dynamics Observatory was the agency's first mission dedicated to its "Living With a Star" program, which focuses on increasing our understanding of the causes of solar variability and its impacts on Earth. Launched into an inclined geosynchronous orbit in February 2010, SDO has been able to make continuous observations of the Sun while transmitting its data to a dedicated ground station in New Mexico.

The 15-foot-tall by 6.5-foot-wide (4.5-meter by 2-meter) spacecraft is outfitted with equipment and instruments to capture images of the Sun in multiple wavelengths of visible, ultraviolet and extreme ultraviolet light. SDO has gathered hundreds of millions of images during its more than a decade-long tenure, helping scientists to learn about how our star works and how its constantly churning magnetic fields produce the solar activity that we see.

The study of the Sun and its influence on the planets and space surrounding it — a field of research known as heliophysics — holds implications for the understanding of our solar system and the thousands of solar systems that have been discovered beyond our own.

As the closest star to Earth, the Sun is the only nearby star that scientists have been able to study in great detail, making it a vital source of data. Solar activity can drive space weather closer to our planet, which can interfere with technology and radio communications in space.

"It's inspiring to be able to share the import and excitement of studying the Sun with people around the country," said Zurbuchen of the new stamps.

The "Sun Science" stamps were designed by USPS art director Antonio Alcalá. Each of the ten stamps feature a single image of the Sun set against a black background. The format matches three previous USPS releases — "Views of Our Planets" (2016), "New Horizons and Pluto" (2016) and "1969: First Moon Landing" (2019) — also designed by Alcalá. 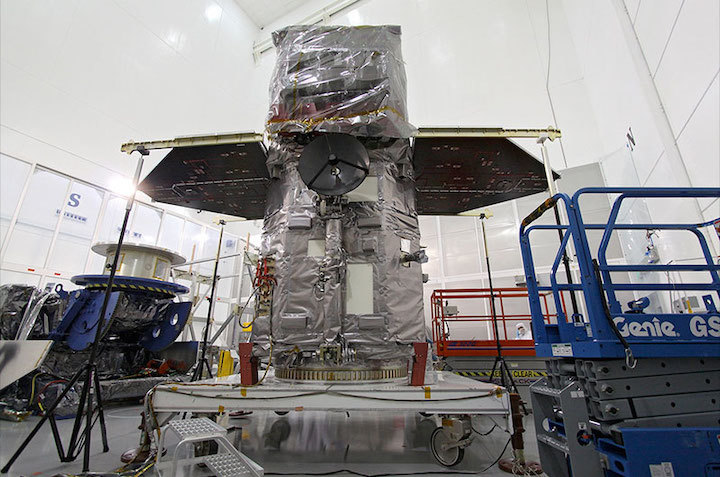 NASA's Solar Dynamics Observatory (SDO), with its solar arrays deployed, is tested prior to its February 2010 launch into orbit. (NASA/Jack Pfaller)