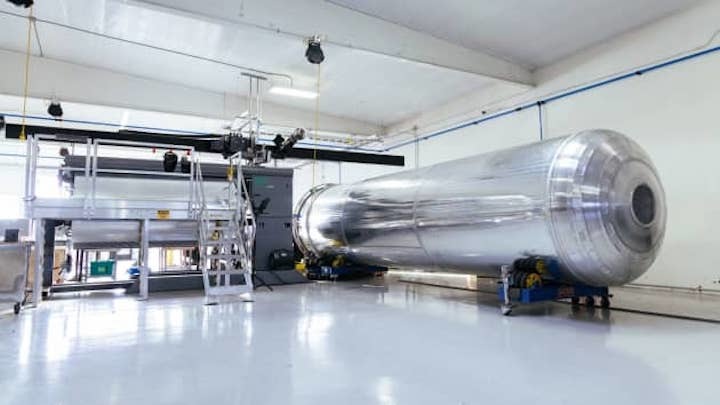 The first stage of the company’s RS1 rocket after completing welding.
ABL Space

EL SEGUNDO, California — Rocket building startup ABL Space, founded by veterans of SpaceX and Morgan Stanley, is in the final stretch of preparations for its inaugural launch from Vandenberg Air Force Base.

“We’re tracking toward vehicle readiness in March,” ABL president and CFO Dan Piemont told CNBC on Monday during a tour of the company’s Los Angeles-area facilities.

“We’re working on the last bits of scheduling with the [Vandenberg launch] range. We do think that could push us into Q2, so right now no earlier than March but no later than June is the plan,” Piemont added.

ABL’s first launch represents the latest company that is close to offering another option for satellites and spacecraft to get to orbit, in the increasingly competitive space sub-sector of private rocket builders. ABL would enter the market as an option in between Elon Musk’s SpaceX and small launcher Rocket Lab, and the timing of its inaugural attempt comes as several other companies race to reach orbit for the first time.

ABL has raised $49 million to date in venture capital funding, with investors including Venrock, New Science Ventures, Lynett Capital and Lockheed Martin Ventures. Additionally, ABL previously announced it has won contracts from the Air Force Research Laboratory and AFWERX, with the awards worth $44.5 million over three years.

“We consider the program fully funded well beyond the first launch, and into launching our sixth, seventh and eighth missions and beyond,” Piemont said.

ABL CEO Harry O’Hanley said that in the past few months the company has focused on completing integrated tests of the upper stage of its RS1 rocket at Edwards Air Force Base, tests which included firing the in-house developed E2 engine. One of the key remaining milestones is a full duration test firing of the upper stage, which O’Hanley said is “the next big one on the roadmap” to launch.

A fully-integrated RS1 second stage in test firing at Edwards Air Force Base in 2020.
ABL Space

ABL’s RS1 rocket stands at 88 feet tall, and is designed to launch as much as 1,350 kilograms (or nearly 1½ tons) of payload to low Earth orbit – at a price of $12 million per launch. That puts RS1 in the middle of the commercial launch market, between Rocket Lab’s small Electron for $7 million and SpaceX’s heavy Falcon 9 for $62 million.

It also pits ABL against several other companies developing “medium-lift” rockets that are aiming to reach orbit this year, such as Richard Branson’s Virgin Orbit, Relativity Space and Firefly Aerospace.

RS1 is made of an aluminum alloy and, when ABL first set out designing the rocket, Piemont said the company got quotes from suppliers on how much it would cost using traditional manufacturing processes for each part.

But then ABL set about vertically integrating as many parts of RS1′s manufacturing as possible, such as designing the E2 engines to be 3D-printed in three pieces, so as to fit in readily available metal printers.

“With the verticalization we’ve done — as well as the process improvements we found in the primary structures, turbopumps, engines, avionics and elsewhere — we’re looking at about 25% of th

at quoted cost,” Piemont said, or “about a 75% cost savings based on that portfolio of improvements.”

O’Hanley and Piemont met as undergraduates at MIT, before the former went to work at SpaceX for nearly six years and the latter started his career with Morgan Stanley’s institutional finance group. But in mid-2017, O’Hanley began bouncing ideas off of Piemont about starting a new rocket company and the pair decided to found it together, officially incorporating ABL in August 2017.

“The way we’ve built our company in every domain has always been bottoms up, we’ve never hired a VP,” O’Hanley said. “When we realized we needed to have machine shop, we hired a machinist and bought one machine.”

Piemont said ABL’s “second hire was actually a web developer,” because “all the software we use to run our processes is custom.” He and O’Hanley wanted even ABL’s manufacturing software to be built in-house, so that “before we even started designing the vehicle, we’re entering software systems of use for purchasing inventory, filing work orders and build orders, run test operations and collect data for review.”

“We’ve been building that side of our infrastructure, along with the vehicle itself, which is I think been an underrated aspect of how we stay nimble and move fast,” Piemont added.

ABL now has about 105 employees, with about 90,000 square feet of space in several buildings in El Segundo, as well as testing facilities at Edwards Air Force Base and at Spaceport America in New Mexico.

“We can build and ship a launch vehicle about every 30 days, based on infrastructure we have now,” Piemont said. “We’re tracking towards eight or nine [rockets] a year based on existing infrastructure.”

While ABL has significant contracts and relationships with the Pentagon, Piemont said the company’s customer pipeline is 60% private, or commercial, versus 40% government payloads. The company has customers lined up to launch payloads on its first few missions, although ABL may fly mass simulators, which are often a slab of concrete to represent a spacecraft’s weight, for the first RS1 launch.

Spending $100 million has been the benchmark for a 21st century rocket builder to reach orbit for the first time. SpaceX and Rocket Lab, the two private companies currently flying regularly, each spent roughly that much — and even Astra, which came just shy of reaching orbit with its first space launch last month, had raised about $100 million from investors.

But ABL thinks it will reach orbit in under four years since its founding, and for less.

“Our total expenditures through the day we ran the integrated stage test in October was $25 million, which gives us the high confidence that we will complete the orbital program for well under $100 million,” Piemont said.

One of the shipping containers that holds the GS0 deployable launch system infrastructure.
ABL Space

Beyond the rocket itself, ABL also touts the efficiency of its GS0 deployable ground system. It’s essentially the barebones of a launch facility — the erector, fueling, electrical, control center and more — all packed into a few standard-sized shipping containers.

“The GS0 system give us some huge advantages, because infrastructurally all we need is a flat concrete pad and everything else we can build here at El Segundo and then deliver to the site,” Piemont said.

The system’s development is complete, with ABL now constructing GS0. In addition to flexibility and simplicity, ABL sees GS0 as enabling “responsive launching,” O’Hanley explained — a feature the U.S military is interested in utilizing.

“We’ve actually got a contract with the Space Force to demonstrate some of those activities on the ground, where we’re basically working with them to bring a rocket vertical and see how quickly we can fill it and prepare for launch operations,” O’Hanley said.

“Short call time is a huge sublime business for what we’re doing, and we have a set of concepts for the DOD where you can have RS1s stored on base, ready to launch for this rapid call up time. Part of having the lightweight launch infrastructure, the mobile launch site, is to enable that,” he added.

He noted that ABL will be conducting that demonstration for the Space Force later this year.

A composite image showing a Falcon 9 rocket booster lifting off and a few minutes later landing back near the launchpad.
SpaceX

The practice, and not just the theory, of reusing rockets to save money and time has gained steady traction in the past few years, in large part due to SpaceX’s success landing its rocket boosters.Rocket Lab has also begun to attempt to recover its Electron rocket, despite originally designing the boosters to be expendable.

While RS1 is designed to be expendable, O’Hanley and Piemont stressed that ABL has not ruled out working to upgrade the rocket to be reusable in the future.

“Economically, if we throw these away every time, that’s totally fine for our purposes and the books look great,” O’Hanley said. “If we did a reusable rocket, it would likely be motivated by logistics and cycle time, manufacturing, more so than cost.”

Rocket Lab CEO Peter Beck has similarly cited production speed as a primary reason for reusing rockets, rather than the cost savings advantage that SpaceX leadership frequently points to as its motivation.

O’Hanley said ABL is not thinking about reuse ahead of its first launch, as “right now it’s minimize scope, get to the pad, be successful.”

“I think as we scale up we will evaluate it after first launch,” O’Hanley said.

He added that ABL has the right team to add reusability to its rockets, as he led work on the “grid fin” system that SpaceX uses to control its Falcon 9 rockets during return through the atmosphere. Other employees having similar strong reusability pedigrees — such as members of the team that did the first refurbishment of a Falcon 9.

“So reuse is not in the current near-term plans, but it’s something that we probably are set up for in the future,” O’Hanley said.