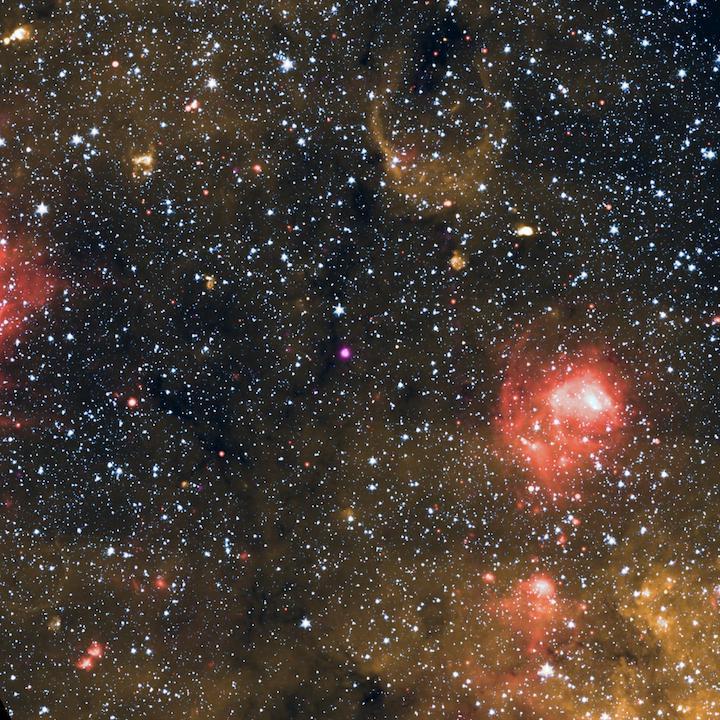 This image contains an exceptional magnetar, a type of neutron star with very powerful magnetic fields. Astronomers have found evidence that this object may be the youngest known magnetar (about 500 years old in Earth's timeframe). It is also the fastest rotating one yet discovered (spinning about 1.4 times per second). This image shows the magnetar in X-rays from Chandra (purple) at the center of the image in combination with Spitzer and WISE infrared data showing the wider field of view. Magnetars form when a massive star runs out of nuclear fuel and its core collapses onto itself.

In 2020, astronomers added a new member to an exclusive family of exotic objects with the discovery of a magnetar. New observations from NASA's Chandra X-ray Observatory help support the idea that it is also a pulsar, meaning it emits regular pulses of light.

Magnetars are a type of neutron star, an incredibly dense object mainly made up of tightly packed neutron, which forms from the collapsed core of a massive star during a supernova.

What sets magnetars apart from other neutron stars is that they also have the most powerful known magnetic fields in the universe. For context, the strength of our planet's magnetic field has a value of about one Gauss, while a refrigerator magnet measures about 100 Gauss. Magnetars, on the other hand, have magnetic fields of about a million billion Gauss. If a magnetar was located a sixth of the way to the Moon (about 40,000 miles), it would wipe the data from all of the credit cards on Earth.

On March 12, 2020, astronomers detected a new magnetar with NASA's Neil Gehrels Swift Telescope. This is only the 31st known magnetar, out of the approximately 3,000 known neutron stars.

After follow-up observations, researchers determined that this object, dubbed J1818.0-1607, was special for other reasons. First, it may be the youngest known magnetar, with an age estimated to be about 500 years old. This is based on how quickly the rotation rate is slowing and the assumption that it was born spinning much faster. Secondly, it also spins faster than any previously discovered magnetar, rotating once around every 1.4 seconds.

Chandra's observations of J1818.0-1607 obtained less than a month after the discovery with Swift gave astronomers the first high-resolution view of this object in X-rays. The Chandra data revealed a point source where the magnetar was located, which is surrounded by diffuse X-ray emission, likely caused by X-rays reflecting off dust located in its vicinity. (Some of this diffuse X-ray emission may also be from winds blowing away from the neutron star.)

Harsha Blumer of West Virginia University and Samar Safi-Harb of the University of Manitoba in Canada recently published results from the Chandra observations of J1818.0-1607 in The Astrophysical Journal Letters.

This composite image contains a wide field of view in the infrared from two NASA missions, the Spitzer Space Telescope and the Wide-Field Infrared Survey Explorer (WISE), taken before the magnetar's discovery. X-rays from Chandra show the magnetar in purple. The magnetar is located close to the plane of the Milky Way galaxy at a distance of about 21,000 light-years from Earth.

Other astronomers have also observed J1818.0-1607 with radio telescopes, such as the NSF's Karl Jansky Very Large Array (VLA), and determined that it gives off radio waves. This implies that it also has properties similar to that of a typical "rotation-powered pulsar," a type of neutron star that gives off beams of radiation that are detected as repeating pulses of emission as it rotates and slows down. Only five magnetars including this one have been recorded to also act like pulsars, constituting less than 0.2% of the known neutron star population.

The Chandra observations may also provide support for this general idea. Safi-Harb and Blumer studied how efficiently J1818.0-1607 is converting energy from its decreasing rate of spin into X-rays. They concluded this efficiency is lower than that typically found for magnetars, and likely within the range found for other rotation-powered pulsars.

The explosion that created a magnetar of this age would be expected to have left behind a detectable debris field. To search for this supernova remnant, Safi-Harb and Blumer looked at the X-rays from Chandra, infrared data from Spitzer, and the radio data from the VLA. Based on the Spitzer and VLA data they found possible evidence for a remnant, but at a relatively large distance away from the magnetar. In order to cover this distance the magnetar would need to have traveled at speeds far exceeding those of the fastest known neutron stars, even assuming it is much older than expected, which would allow more travel time.