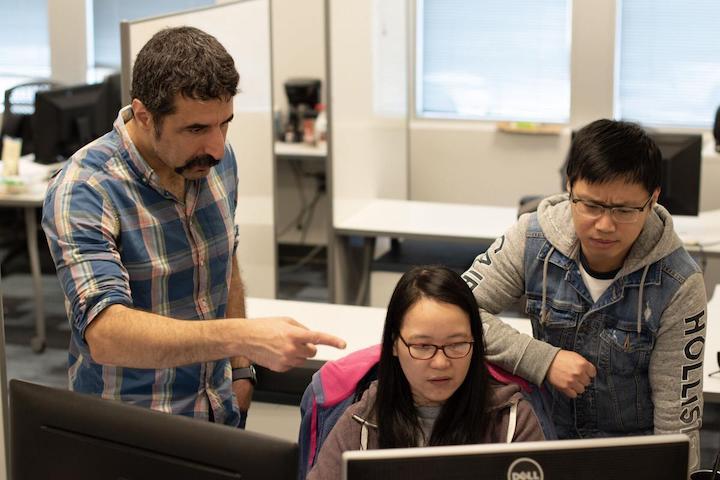 COLUMBIA — For NASA, studying the outermost reaches of space will require the help of robots. But distance can lead to communication problems between the robots and the scientists controlling them.

That’s why a University of South Carolina artificial intelligence researcher is working with NASA scientists to teach the machines to make crucial in-the-moment decisions, putting his mark on mankind’s endless pursuit to discover life beyond our own planet.

Pooyan Jamshidi, USC assistant professor of computer science and engineering, and his team were one of two groups to receive a two-year, $250,000 grant from NASA to develop machine learning technology for deep space missions.

It can take several hours for data from rovers to reach control stations on Earth and vice versa. That’s an issue when the machines need to react to unexpected changes in radiation, weather or surface conditions, Jamshidi said.

“Scientists have very limited knowledge of the kinds of things that can go wrong,” he said. “Imagine that the lander would be doing some science experiment, like drilling ice to get a core sample. Some of these instruments are very sensitive to radiation level. Without stopping the experiment and reconfiguring itself, the lander my lose the instruments.”

Losing those instruments or the lander itself is costly, putting government scientists out of billions of dollars in equipment.

“The real-time decision making is the key for some of these situations,” Jamshidi said.

With limited exposure to the sunlight that powers the rovers, the machine also needs to be able to make the most of its battery life. Making the rovers smart enough to recognize certain compounds means they could autonomously decide to run an experiment on the material without waiting for an Earth-based scientist’s instruction to do so.

The research project is in the early stage and would have to overcome several large hurdles before it could be implemented, including virtual simulation tests, as well as physical simulations using an actual rover at NASA’s California-based Jet Propulsion Laboratory.

If successful, NASA hopes in the coming decades to install the software on rovers launched to places like Europa and Titan, two of the oceanic moons of Jupiter and Saturn. According to NASA’s website, scientists would like to look for microbial life in the liquid subsurfaces of these moons.

Jamshidi is working with researchers from Carnegie Mellon University and the University of York and doctoral candidates from the University of Arkansas, as well as other USC researchers, on the project. They are also working in conjunction with the other grant recipient, Honeybee, a private robotics company based in New York City.

Jamshidi came to USC from Carnegie Mellon in 2018, where he first helped develop the autonomous software that the team hopes to advance with this new grant. He’s also been studying autonomous systems since graduate school, enabling mobile robots to self-adapt to environmental changes.

This grant marks the first time USC computer scientists will be working directly with NASA scientists, rather than their research being confined to a lab setting, Jamshidi said.

“We’re proud of our faculty who continue to secure research grants bestowed only to a select few teams,” Caslen said. “We are uniquely positioned to make a big impact with our AI capability.”

Beyond applications in space, Jamshidi believes if the technology is proven, it could serve earthly adaptations, such as the development of self-driving cars.