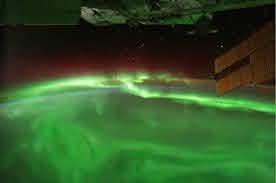 Computer simulations explain how electrons with wide-ranging energies rain into Earth's upper and middle atmosphere during a phenomenon known as the pulsating aurora. The findings, published in the journal Geophysical Research Letters, suggest that the higher-energy electrons resulting from this process could cause destruction of the part of the ozone in the mesosphere, about 60 kilometres above Earth's surface. The study was a collaboration between scientists in Japan, including at Nagoya University, and colleagues in the US, including from NASA.

The northern and southern lights that people are typically aware of, called the aurora borealis and australis, look like coloured curtains of reds, greens, and purples spreading across the night skies. But there is another kind of aurora that is less frequently seen. The pulsating aurora looks more like indistinct wisps of cloud strumming across the sky.

Scientists have only recently developed the technologies enabling them to understand how the pulsating aurora forms. Now, an international research team, led by Yoshizumi Miyoshi of Nagoya University's Institute for Space-Earth Environmental Research, has developed a theory to explain the wide-energy electron precipitations of pulsating auroras and conducted computer simulations that validate their theory.

Their findings suggest that both low- and high-energy electrons originate simultaneously from interactions between chorus waves and electrons in the Earth's magnetosphere.

Chorus waves are plasma waves generated near the magnetic equator. Once formed, they travel northwards and southwards, interacting with electrons in Earth's magnetosphere. This interaction energizes the electrons, scattering them down into the upper atmosphere, where they release the light energy that appears as a pulsating aurora.

Miyoshi and his team suggest that the high-energy electrons of pulsating auroras are 'relativistic' electrons, otherwise known as killer electrons, because of the damage they can cause when they penetrate satellites.

"Our theory indicates that so-called killer electrons that precipitate into the middle atmosphere are associated with the pulsating aurora, and could be involved in ozone destruction," says Miyoshi.

The team next plans to test their theory by studying measurements taken during a space rocket mission called 'loss through auroral microburst pulsations' (LAMP), which is due to launch in December 2021. LAMP is a collaboration between NASA, the Japan Aerospace Exploration Agency (JAXA), Nagoya University, and other institutions. LAMP experiments will be able to observe the killer electrons associated with the pulsating aurora.

The paper, "Relativistic Electron Microbursts as High‐Energy Tail of Pulsating Aurora Electrons," was published online in Geophysical Research Letters on October 13, 2020, and is available at DOI: 10.1029/2020GL090360.

Astronomie - Killer electrons in strumming sky lights Wisps of pulsating aurora lights are a rare, yet magical sight. Now, scientists suggest they could be associated with destruction of part of the o
« Zum vorherigen Eintrag Zum nächsten Eintrag »
133 Views
Created with page4