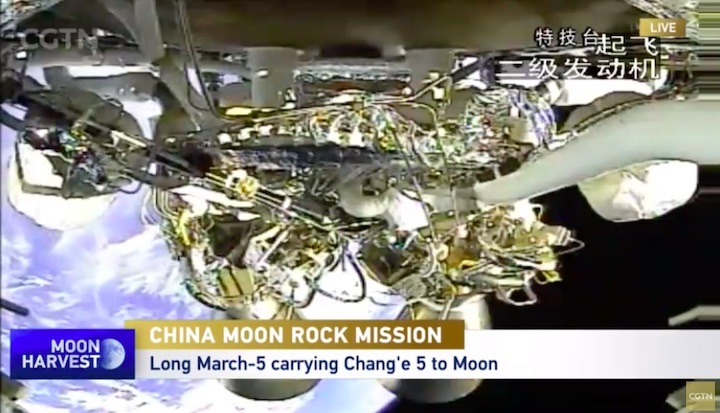 China plans to build a prototype for a lunar scientific research station in the fourth phase of the country's lunar exploration program, said Wu Weiren, chief designer of the program.

The prototype, which will consist of multiple detectors operating in lunar orbit and on the lunar surface, will be capable of conducting scientific and technological research on the moon, as well as technical verification of lunar resource exploration and utilization, said Wu at the Wenchang International Aviation & Aerospace Forum, which concluded Wednesday in Wenchang City, south China's island province of Hainan.

With the planned prototype, Chinese scientists will seek cooperation with their international counterparts to build an international lunar scientific research station, said Wu, also an academician of the Chinese Academy of Engineering.

On Tuesday, China launched the Chang'e-5 spacecraft to collect and return samples from the moon, the country's first attempt to retrieve samples from an extraterrestrial body. It marked the end of the third phase of China's lunar exploration program.

According to the plan of the fourth phase of the program, the Chang'e-7 spacecraft will conduct a comprehensive exploration of the moon's Antarctic topography, material composition and space environment, said Wu.

The Chang'e-8 spacecraft will be tasked with conducting further scientific tests as well as the verification of key technologies, the scientist added. Enditem

Experts and media worldwide have hailed China's latest lunar mission as a "revolutionary" step forward for deepening humanity's understanding of the lunar history.

A Long March-5 rocket, carrying the Chang'e-5 spacecraft, blasted off from the Wenchang Spacecraft Launch Site on the coast of China's southern island province of Hainan at 4:30 a.m. Beijing Time (2030 GMT) two days ago.

Chang'e-5 is one of the most complicated and challenging missions in China's aerospace history, according to the China National Space Administration (CNSA). Its landing site will be in the northwest region of Oceanus Procellarum, also known as the Ocean of Storms, on the near side of the Moon.

James Head, a planetary geoscientist at Brown University, said that this area is of particular interest to scientists because it could confirm whether the Moon was still volcanically active some 1 billion to 2 billon years ago.

The CNSA said the craft plans to bring about 2 kg of lunar samples back to Earth.

The samples, when returned and analysed, will give us a "treasure trove of new information" that will "revolutionize our understanding of lunar history," Head added.

Clive Neal, a geoscientist at the University of Notre Dame in Indiana, the United States, said if successful, the mission "marks the beginning of a new era of robotic sample returns from the Moon that will undoubtedly change scientists' understanding of the planetary body."

Patrick Michel, planetary scientist at France's National Center of Scientific Research's Cote d'Azur Observatory, believed that an analysis of the lunar soil samples is like delving into the ancient memories of the solar system.

Every sample brought back to Earth, from whether the Moon or asteroids, helped us better understand the universe, Michel said.

On Tuesday, the European Space Agency tweeted its "best wishes for a successful mission" of China's Chang'e-5 spacecraft.

Describing the program as the "latest milestone in China's space missions," the Associated Press on Tuesday briefly looked back on China's "cautious and incremental" space endeavors starting this century.

"China prides itself on arriving at this point (launch of Chang'e 5) largely through its own efforts," it said.

"Pulling off the Chang'e-5 mission would be an impressive feat for any nation," the press quoted Florida-based expert Stephen Clark of the publication Spaceflight Now as saying.

The probe conducted the orbital correction at 10:06 p.m. (Beijing Time), when its two 150N engines were operational for about six seconds.

Prior to the orbital correction, the lunar probe had traveled for roughly 41 hours in orbit, and was about 270,000 km away from Earth. All of the probe's systems were in good condition.

The CNSA said that the tracking of the probe by ground monitoring and communication centers and stations is going smoothly.

China launched the lunar probe Tuesday to collect and return samples from the moon. It is the country's first attempt to retrieve samples from an extraterrestrial body. Enditem

Chang'e-5 probe, which was launched Tuesday to collect and return moon samples, is expected to achieve multiple breakthroughs in its journey.

The lunar mission is comprised of an orbiter, a lander, an ascender and a returner. After it enters lunar orbit, the lander-ascender combination will separate from the orbiter-returner combination. The lander-ascender will touch down on the northwest region of the moon's Oceanus Procellarum, collect samples from the lunar surface, as well as drill into the ground.

The sampling task is full of uncertainties, according to Peng Jing, deputy chief designer of the Chang'e-5 probe from the China Academy of Space Technology (CAST) under the China Aerospace Science and Technology Corporation.

Chang'e-5 will be the world's first moon-sample mission for more than 40 years, and Chinese space engineers have made elaborate plans for possible challenges ahead, according to Peng.

"We are not sure whether the landing site is made of hard rock or loose soil, so we have developed sampling instruments for different scenarios," Peng said. "We developed two sampling methods, including drilling underground and collecting samples from the lunar surface, to increase the chance of acquiring more diverse samples."

The packaging and sealing of the moon samples also requires an elaborate design to prevent leakage and contamination. Earth is surrounded by an atmosphere that contains both gases and floating solid particles, which might contaminate lunar samples if they are not perfectly sealed, limiting their scientific value.

The packaging device should be able to perform well in harsh environments, said Wang Xianrong, a researcher from the CAST.

After sampling, the ascender will take off and dock with the orbiter-returner in lunar orbit to transfer samples to the returner. The takeoff from the moon will also be a difficult task.

Peng said the lander will act as the "launching pad" of the ascender, but the lander might not be horizontal and stable as it should be and is likely to land on a slope or complex terrain.

During the rendezvous and docking, there is only a five-cm margin of error when controlling the two spacecraft, Peng said.

The orbiter will carry the returner back to Earth. The returner, with the samples on board, will then reenter the atmosphere and land at Siziwang Banner in north China's Inner Mongolia Autonomous Region.

The orbiter-returner is expected to arrive at Earth at a speed of more than 11.2 km per second, the second cosmic velocity or escape velocity.

The designers have developed a skip reentry method mimicking a skipping stone to lower the craft's speed, according to Pei Zhaoyu, deputy director of the Lunar Exploration and Space Program Center of the China National Space Administration.

"The returner will enter the atmosphere at a high speed, then spring out of the atmosphere with the lift of the air, and plunge back into the atmosphere at a lower speed roughly equal to that of a return satellite, for which we have experience in reentry," Pei said. "The method will make the reentry safer, and provide a technical foundation for future manned missions." Enditem