The source of this information came from Project 1947’s files and reference Jan Aldrich and Barry Greenwood as sources. There is also mention of the source being the Volunteer Flight Officer’s network (UAL). I inquired to both Greenwood and Aldrich about the file. Greenwood stated that the file probably exists at CUFOS but he did not have any copies. Mr. Aldrich was able to locate it and stated it was probably a barium cloud experiment. Unfortunately, Mr. Aldrich did not provide me with the physical report before I published this issue, so I can’t present it here.

The location isn’t actually in Virginia but over the east coast of Delaware in the vicinity of Wallops Island. It just so happens that at 2350 UTC (within seven minutes of the time listed), a Nike-Ajax was launched on an aeronomy mission from Wallops Island.2 The distance between the aircraft and Wallops Island was about 65 miles. Just as I had surmised, prior to discussing it with Mr. Aldrich, this is what probably produced the report.

There seems to be no good reason to dismiss the possibility that this was the Nike-Ajax missile launch. This should be reclassified as probable rocket launch and removed from the Weinstein catalogue. 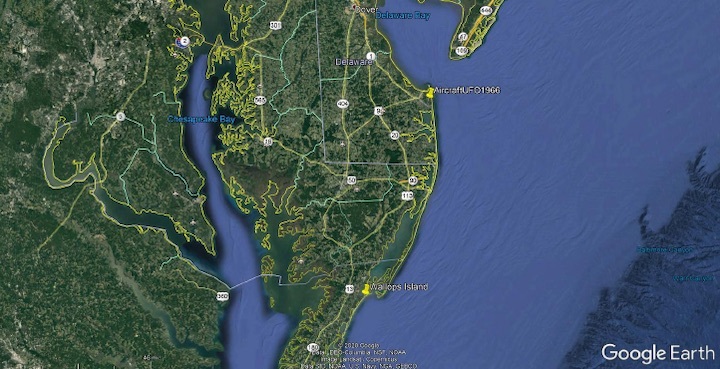 In my discussion with Mr. Aldrich, he mentioned that the Weinstein catalogue does not really provide evidence of anything (yet various UFO enthusiasts seem to think it does). He also added that Project 1947 is attempting to “prune” the list. They list only two cases that had explanations, which indicates that the effort is half-hearted at best. In my opinion, a pruning is inadequate and a weed whacking is more appropriate. In SUNlite 11-4, I listed all the cases that, in my opinion, had potential explanations (although one was incorrect, which I mentioned in SUNlite 11-6). Since that issue, I have taken on other cases and offered explanations. I will continue this effort until I am satisfied I can no longer find any that have potential explanations.