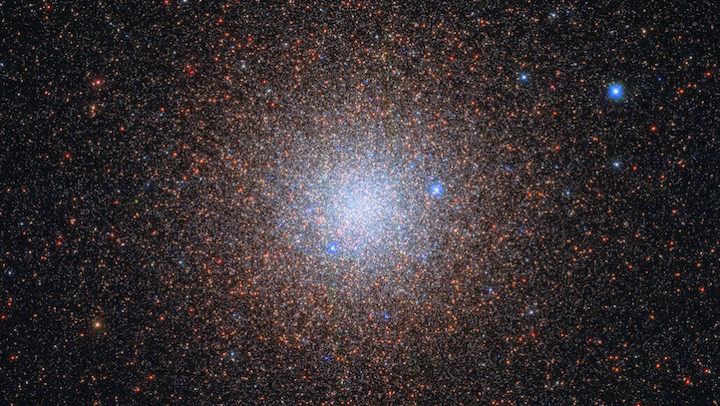 Globular clusters contain some of the oldest, most pristine stars in a galaxy. This one, NGC 6441, is one of the most massive in the Milky Way. A similarly massive globular cluster in the nearby Andromeda galaxy has the strangest chemistry ever seen.

A strange, newly measured clump of stars orbiting the nearby Andromeda galaxy has the lowest level of heavy chemical elements ever seen in one of these mysterious star clusters. Named RBC EXT8, this globular cluster is also surprisingly massive, challenging theories for how such clusters and some galaxies form, astronomers report online October 15 in Science.

“It’s a very unusual object,” says astrophysicist Oleg Gnedin of the University of Michigan in Ann Arbor, who was not involved in the new discovery.

Globular clusters are crowded, spherical collections of stars that orbit a galaxy’s center, though most, including RBC EXT8, live in the galactic outskirts. The clusters are typically billions of years old, so their stars tend to be chemically pristine, meaning they formed before the universe had time to create much of any of the elements heavier than hydrogen or helium, which astronomers lump together as “metals.”

Previous observations of these clusters in the Milky Way and other galaxies had suggested that there’s a limit to how low a globular cluster’s metal content can be. The most metal-poor clusters were about 300 times less rich in heavy elements like iron than the sun, but no less.

But spectra of RBC EXT8, some 2.5 million light-years away, show that the cluster’s metal content is about 800 times less than the sun’s. The globular cluster that held the previous record for lowest “metallicity” has three times that amount.

“It was completely unexpected that we would find a globular cluster that is so metal poor,” says astronomer Søren Larsen of Radboud University in Nijmegen, the Netherlands.

What’s more, given its metal-poor status, this cluster is surprisingly massive, weighing about 1.14 million times the mass of the sun. (A mid-weight globular cluster is about 100,000 solar masses, but some clusters reach 3 million solar masses. RBC EXT8 is heavy, but not the heaviest.)

That mass makes the cluster even harder to explain because across the cosmos, the more massive a galaxy or cluster is, the more heavy elements it normally has.

There are several potential explanations for that trend, but one is simply that more massive galaxies or globular clusters have more stars. A star fuses heavy elements in its core and sprinkles them around its host cluster or galaxy as it ages. Sufficiently massive stars can explode in a supernova, spreading those metals to become part of the next generation of stars (SN: 8/9/19). So more stars means more opportunity for metals to accumulate locally.

More massive objects also have the advantage of gravity, which lets them better hold on to the metals that they do have and remain a cohesive group for billions of years. Less massive globular clusters dissolve into their host galaxies over time.

Those trends together could have explained the apparent “metallicity floor” for globular clusters — all of the less massive, more metal-poor clusters have broken apart over the eons.

RBC EXT8 turns that conventional wisdom on its head. “It’s too big to have as low metallicity as it has,” Gnedin says. “That’s the conundrum.”

Astronomers aren’t sure how globular clusters form in general, but they probably grow within galaxies, rather than forming outside of them and being pulled in later. And so the clusters reflect the characteristics of their galaxies: small, metal-poor galaxies end up with small metal-poor globular clusters, and vice versa. But based on RBC EXT8’s metal content, it’s galactic birthplace would be less than a million solar masses, so smaller than the globular cluster itself – which is a paradox.

As a result, the cluster challenges some simplified models of galaxy formation. But it doesn’t completely break them, Gnedin says. “It’s one object, it’s not going to overturn things,” he says. “It just makes us people working on these issues have to work harder” and be more open-minded about other ways that galaxies could form.

Open-mindedness and willingness to explore is perhaps responsible for the new finding about RBC EXT8’s metals. Larsen and colleagues spotted the globular cluster at the beginning of a night of observing with the Keck telescope in Hawaii in October 2019. “It was really a serendipitous discovery,” he says. He had a spare hour before the globular clusters in galaxy M33 that his team was planning to look at rose above the horizon, so the observers picked another cluster “more or less at random” to fill the time.

“At first, I couldn’t really believe that what was coming out [in the observations] was right,” Larsen says. “But I kept working on it, and it turned out to hold up.”